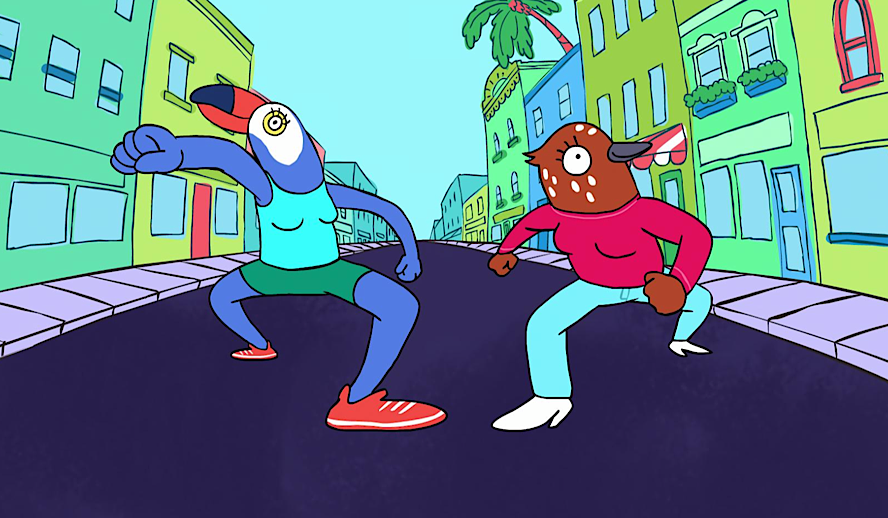 Lisa Hanawalt’s chaotic yet relatable take on millennial womanhood is back for season two after Netflix’s cancellation binge. ‘Tuca and Bertie’, which originally premiered on Netflix in 2019 to rave reviews, has risen from the fire like a phoenix, now calling Adult Swim it’s new home (or nest). Now that the second season is halfway through, the series is truly developing into something special, delving deeper into their characters and showing sides of them that they didn’t even know.

The second season uses the characters of Tuca and Bertie to explore the different phases in life that women often go through, whether that is the isolation one feels from not being in a relationship to how trauma affects your seemingly mundane daily life. While ‘Tuca and Bertie’ is funnier than ever, it also reveals the darkest sides of these lovable characters.

Tuca: More Than A Comic Relief

Season two of the series performs the tough balancing act of the complex comic relief, where in one episode we see Tuca (Tiffany Hadish) becoming mad with power at her new job as a crossing guard then in the next we see Tuca dealing with her insomnia brought on by loneliness. The season’s fourth episode, ‘Nighttime Friend’, is one of the strongest episodes in the season, showcasing a side of the loud and confident Tuca that we haven’t seen before. ‘Nighttime Friend’ follows Tuca and what she does at night when she can’t sleep which includes walking the night streets alone, sneaking Aunt Tallulah (Jenifer Lewis) malt liquor in the hospital, and seeing the same faces every night, even having her own regulars on her solo night adventures. One of these faces is a nurse at the hospital, Kara, with who Tuca becomes infatuated.

‘Nighttime Friend’ offers a beautiful and awe-inspiring look on loneliness as we watch Tuca mindlessly wandering around the streets at night, everything around her being colored blue to illustrate that sad night feeling. At times the animation almost looks as if Tuca is walking the streets of a Van Goh painting, remaining in blue shadows when she is alone and becoming brighter and wavier once she is joined on her night walks by Kara.

We see Tuca’s nighttime world when she is by herself, eating at a diner, visiting her mother’s grave, and talking to a seemingly young boy (he’s a late bloomer, okay) from a window who also can’t sleep. When we see Tuca let Kara into her world, the two of them eating hard-boiled eggs at the diner, walking through the graveyard, and even singing a lullaby to the stubborn boy, the audience is left with the same emotions that the ‘Before’ trilogy leaves you with. That feeling of hope and wonder that comes with seeing young lovebirds.

It can be easy for many comic reliefs to just become the support of the main character, helping their best friend with their problems while having no problems of their own. While Tuca is this to Bertie (Ali Wong), the series explores the effects of always being the supportive friend. While Bertie has her boyfriend, Speckle (Steven Yeun), Tuca doesn’t have anyone else, she doesn’t have anyone to support her in ways that Bertie can’t. This is masterfully shown in ‘Nighttime Friend’, getting to see what Tuca does when Bertie’s asleep and seeing how she looks at couples and big groups of friends with jealousy and disappointment. While it is not only great to see Tuca’s problems explored on the same level as Bertie’s, her storyline this season offers an emotional and even visual portrayal of loneliness.

Bertie: The Effects of Trauma

The last half of ‘Tuca and Bertie’s’ first season focussed on Bertie being a survivor, from getting abused as a child at summer camp to having an abusive boss, Pastry Pete (Reggie Watts). Season two’s third episode, ‘Kyle’, gives a hint of how Bertie is still coping with her trauma, specifically with Pastry Pete. After Pastry Pete makes a painfully accurate “apology video” to address the abuse allegations from season one, his new “apology pastry” comeback snack is overshadowing Bertie’s attempts to sell her baked goods. To assert herself against Pastry Pete’s competition and the dudebros at her office, she develops the persona of “Kyle” (James Austin Johnson) since she believes that “bros” have it easier.

Bertie’s idea of bros having it easy is rooted in her own trauma with men she considers “bros”, like Pastry Pete and Dirk, a cocky coworker who talks down to Bertie. While Bertie sees some of Kyle’s methods working, she puts him away in the end after realizing that dealing with her problems through some personified ideal she has isn’t helpful.

She shamefully confesses this to her therapist, Joanne (Pamela Adlon), and the two discuss how Bertie’s trauma from summer camp could have given her a warped perception of her relationships with men, causing her to feel attraction to her recently canceled former boss. Bertie and Speckle then have an honest conversation about this, with Speckle even attempting to be more aggressive in bed, satisfying Bertie.

While many films and shows explore trauma, they often focus on the short-term effects instead of the long-term effects. ‘Tuca and Bertie’, focussing on the long-term effects of trauma, gets to explore the aspects that aren’t talked about or are even frowned upon, like what is considered “pleasurable” to a survivor after the traumatic incident. ‘Vibe Check’, not only being a solid vibrator pun, is a clever title for an episode that checks in on the vibes of Bertie, on how she has been coping. The episode’s focus on Bertie’s sexual fantasies about her abusive boss is not only insightful but it is brave. Brave for exploring how we view sexual desire and brave for exploring how trauma can affect one’s own sexual pleasure.

Tuca and Bertie Season 2 – Animation for Women by Women

Season two of ‘Tuca and Bertie’ is really a showcase of why women’s voices in animation matter, and how they can tell their stories in new and insightful ways. While ‘Tuca and Bertie’ can of course be enjoyed by everyone because who wouldn’t like a show that once had Nicole Byer voice a grandmother ghost cake, ‘Tuca and Bertie’ is really made from a female perspective. Season two, like season one, actively sets out to tell the stories that many women have to tell but remain unheard in mainstream animation, from the isolation one can feel from not being partnered up to how the trauma inflicted by men in power can affect one’s daily life.

The first half of ‘Tuca and Bertie’s’ second season consists of some of the strongest episodes of animation that have been put on screen, from their insightful portrayals of womanhood to their hilarious bursts of chaotic energy. ‘Tuca and Bertie’s’ second season almost acts like a Flintstones’ vitamin gummy, inviting you in with fun and bouncy colors while really helping you become a better and healthier person. It tastes good with its “throw everything at the wall” style of humor and it is good for you with its insightful views of the trials of life.

‘Tuca and Bertie’ is available on Adult Swim and on Hulu