‘The War Next Door’: Two Households, One Feud, and Several Misunderstandings 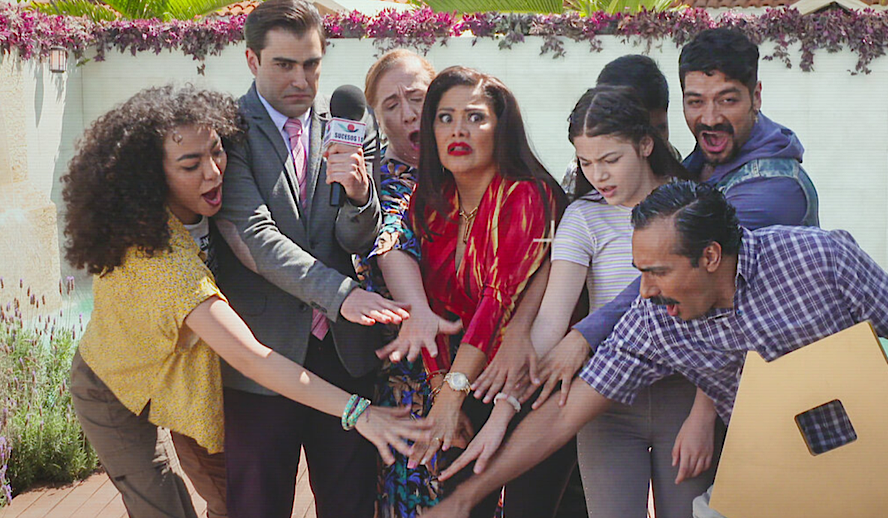 Photo: ‘The War Next Door’/Netflix

When a lower-class family wins an unexpected raffle to a mansion in the best part of town, their newly acquired neighbors heavily object to having their bubbles popped into reality. Written and created by Carolina Rivera, ‘The War Next Door’ (Guerra de Vecinos) is a thirty-minute comedy series that touches on the themes of classism, reverse sexism, family, and hard work. It is a fun family comedy that will make you chuckle a few times per scene.

Creator Carolina Rivera has worked on shows like ‘Devious Maids‘ and ‘Jane the Virgin.‘ Most recently, Carolina Rivera was the sole creator of the Mexican series ‘Daughter From Another Mother‘ (Madre Sólo hay Dos), starring Ludwika Paleta, also available on Netflix.

In ‘War Next Door,’ Rivera’s voice and style peeps through each scene, never forgetting to load each character with subtle jokes and amusing commentary about classism in Mexico. The show is like a ‘Schitt’s Creek,’ but backward, instead of losing all their money, someone wins a lot of it. Also, take away the “Creek” and the “Schitt’s,” and it leaves you with a neurotic rich family in a nice neighborhood, and a lower-class family trying to fit it. I say, a perfect combination for a good laugh.

‘The War Next Door’ – The Characters and Its Tropes

The characters are divided between the wealthy and the so-called new-rich families. The series often leans towards the most common comedic tropes, but always finding a subtle twist that adds a hilarious touch to each character.

The wealthy family consists of the annoying Silvia, a judgmental mother who believes in protecting her family at all costs, which means not letting them dangle between lower-class people. Ana Layevska plays the rich white mother and main enemy to the new matriarch across the street.

Played by Mark Tacher, Ernesto is the clueless husband, who wants to be there for his wife, but heavily disagrees with her judgments and prejudices.

Marco León plays the son of this wealthy family. Diego is a businessman-child whose entrepreneurial tendencies are the culprit for many chaotic events throughout the show.

Lastly, we find the cool girl trope. Loreta Peralta plays Crista, the wealthy daughter whose looks landed her millions of followers and whose privilege blinds her towards any reality different from hers.

Beware, neighbors; your bubble is about to be popped by the new lucky winners!

The family’s beautiful relationship makes you root for them and feel a sort of warmth towards their struggle to fit in. Let’s start with the matriarch of this family. Leonor, played by Vanessa Bauche, a hardworking mother who strives to get her family ahead. Thankfully, through some luck, she accomplished her goal, plus some. Her outspoken and fearless nature helps her overcome and skitter away from Silvia’s claws.

Played by Pascacio López, Genaro is the highly supportive father whose “manliness” feels threatened throughout the series. Evolution into a modern understanding of what being a “man” means is part of this character’s arc.

Then there is a modern trope of the feminist daughter. Played by Elyfer Torres, Tere aims to change the perspective of her family and neighbors by any means. Armando Said is the young son, who fills in the wannabe trope, whose biggest dream is to become the most famous influencer to help his family’s finances along the way.

The lucky winners are, in part, a large family. Adding to the tropes are the overly worried grandmother, the older son who thinks he’s too cool when in reality he isn’t, and finally, the daughter who is too intelligent to be part of this family.

The character’s juxtaposition justifies the chaos that develops throughout the show and the worries each character carries in each episode.

The feud starts with the head matriarchs of the family. Both mothers are strong women who want the best for their families, although prejudices don’t allow them to see the truth behind people. Their personalities clashed, and at the beginning, they believe to be as incompatible as oil and water, but little do they know they are utterly wrong.

Leading the series is Vanessa Bauche, who plays Leonor, the matriarch of the “poor” family. Vanessa Bauche is a Mexican actress whose career spans over twenty years. She is known for her role in ‘Amores Perros,’ a film by Alejandro González Iñárritu. ‘Amores Perros‘ was nominated for an Academy Award in the category for Best Foreign Film in the year 2000.

Next to Bauche stands the beautiful Ana Layevska. Ana Layevska has been part of Mexican Television for more than two decades. She started her career as a child playing the violin and evolved into playing lead roles for Telenovelas for the Mexican network Televisa. Layevska was part of ‘Primer Amor, A Mil Por Hora,’ a Mexican Telenovela aimed at teenagers. ‘Primer Amor, A Mil Por Hora’ was the highest-rated Telenovela of its time. Layevska became a Mexican teen symbol and had been loved by many ever since.

Creator Carolina Rivera took the time to comment on the pressures men often feel, especially in the Hispanic culture, to be a “real man.” The women in this show are portrayed as high-strung, outspoken, and unafraid, while the men tend to have a softer tone that could be considered a “feminine” one. The attention placed on this theme regarding the paternal figures is paramount for the Latin American public and its tendency for toxic masculinity.

New Money and social structure is an idea that is portrayed and often represented in Mexican Television. I will not say that I have not seen this story before. A few scenarios from the show, guide the story to accentuate many stereotypes, and obvious cast selections, such as the white family being the wealthy one. The show has many predictable turns of events, but it is still a fun comedy to watch with your family or significant other after lunch on a Sunday afternoon.

This type of comedy has proven to be entertaining to its audience for decades, and the series accomplishes to make you laugh, several times. It does leave space to wonder if the roles were reversed, how would the world of ‘The War Next Door’ look?

Stream ‘The War Next Door” on Netflix today.