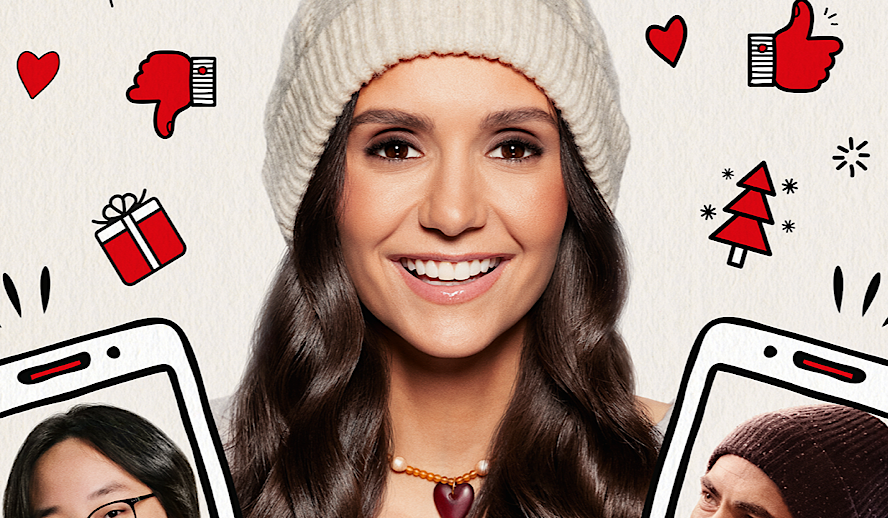 The weather starts to get cold, and suddenly your body is craving for several night-ins, an excellent rom-com, a nice glass of wine, and a humongous fluffy blanket. Netflix’s new romantic Comedy ‘Love Hard,’ is set on the East Coast, with Christmas lights and mistletoe’s, and you realize that it is never too early for a Christmas rom-com.

Grab your coat, and let’s head into Lake Placid, a photogenic place filled with beautiful landscapes and the perfect amount of snow. When an LA writer with a growing career and no luck in men fails to find her perfect other half, she resorts to a popular online dating app. After hundreds of swipes and too many failed dates, Natalie Bauer (Nina Dobrev) believes she finally found her ideal soul mate, Josh Lin (Jimmy O. Yang). Natalie decides (thanks to a push from her untrustworthy boss and hilarious best friend) to surprise her future beau at his home for the holidays. She finds herself flying across the country to surprise a man she’s never met before. Natalie spends her time writing articles about all of her disaster dates, but this time she believes she will finally find her happy ending. Nothing goes as planned or even a tad as expected. Natalie finds herself trapped inside another enormous disappointment.

Disappointment is a common thread throughout the film, as we find the characters are terrified of showing who they really are. Natalie and Josh are stuck together in a lie. They both attempt to slide off easily and continue their lives pretending nothing ever happened, but they soon find out that nothing goes unnoticed by the law of the universe. Consequences have to fall hard as a refund for your actions, well sort of, it is a romantic comedy, after all, consequences are not thrown at characters but rather placed softly on them.

It seems that Andie (Kate Hudson) from ‘How to Lose a Guy in Ten Days,’ the adorable blonde that called Ben’s (Mathew McConaughey), you know what, “Princess Sophia,” inspired the character of Natalie in ‘Love Hard.’ But unlike Andie, Natalie was approached on a surfaced level. Superficiality was the apparent flaw, as Natalie is portrayed as a very LA writer who travels to a nothing-like-her small town. All the big-city girl tropes are unfiltered and expected. Natalie’s character is a hard pill to swallow at times, as she continually fails to surrender her Millennial shallowness and see what is actually in front of her. It seemed like the character of Natalie had been written out of a second-rate Millennial guide. While in contrast to Josh, who is the sweet, lovable loser. The audience is left rooting for the love interest rather than its lead.

There’s No Christmas Without Family

Family plays a significant role in the film, as the characters are heavily influenced by their family members. If you’ve ever spent some time watching even five minutes of a Hallmark movie, you’ll realize the importance of family, as they often aid in pushing the plot forward. An extremely healthy support system justifies Josh Lin’s (Jimmy O. Yang) nature as a good boy. The role of the grandmother, played by Takayo Fisher, exists to soften the slight tension that the characters encounter here and there.

‘Love Hard’ does not bring a surprising element to its genre. The film also does not shower us with depth and symbolism; it is straightforward, one-dimensional, and just like Natalie’s character arc, it comes across as superficial. Not that the shallowness in which the film floats on means there’s no hint of anything good because that would be untrue. The film attempts to comment on society’s lack of connection and the importance of the beauty within. It explores online dating and the idea of innocent love while adding a tad of sweet charm to its circumstances. The film accomplishes to sell a heartwarming relationship between the two leads. The relationship blossoming in front of our eyes is desired, officially giving a slight butterfly or even a kaleidoscope of them, especially when Natalie finally finds true love. Let’s not forget the hints of the Christmas holidays. The glee and tender jokes accompany the film with good balance.

Never As Good As The Originals

‘Love Hard’ feels like an attempted homage to all romantic comedies plus some Christmas lights. It’s like you threw inside a pot several classic romantic comedies, more specifically, ‘Love Actually,’ ‘Can’t Buy Me Love(1987),’ and ‘How to Lose A Guy In Ten Days.’ Mixed them all rather quickly and harsh together without stopping, accidentally losing some of the most important ingredients while in action.

Love is A String of Beautiful Connections

After an hour and some more, there’s an article that still needs to be written about Natalie’s disastrous date life, and as her boss is rooting for the worst (happy endings are not often the chosen articles to be published). Natalie hopes for the best. Natalie’s writing helps her realize that love is never perfect. Love is a lucky little string of connections that she was fortunate enough to find.

While ‘Love Hard’ is not perfect, it’s still a charming rom-com that will connect the dots between love, family, support, and the importance of being you.