‘The Trial of the Chicago 7’: History Repeats Itself in Aaron Sorkin’s Salient Masterpiece 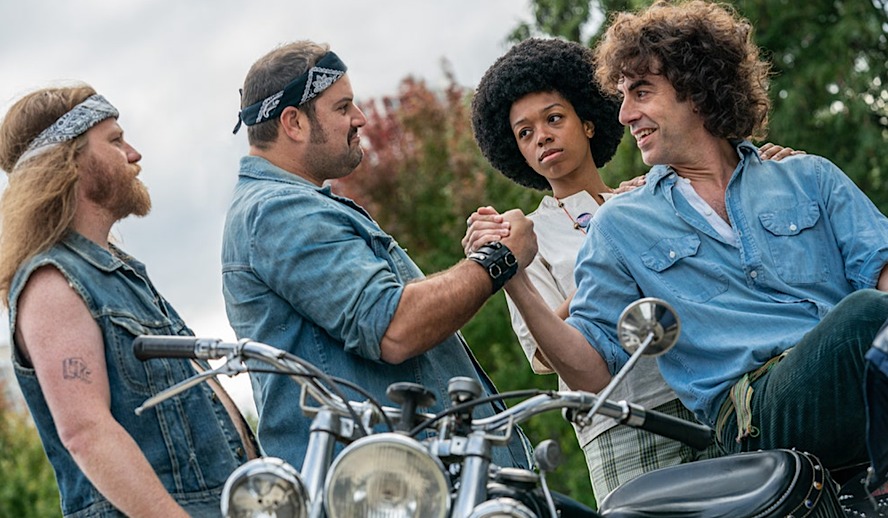 Photo: ‘The Trial of the Chicago 7’/Netflix

‘The Trial of the Chicago 7’: In August of 1968, the Democratic National Convention was held in Chicago, and history was made. In addition to nominating Hubert Humphrey as the Democratic nominee that would replace President Johnson and ultimately lose to Richard Nixon that election year, riots broke out between police and anti-war/civil rights activists. The court case that was held to prosecute the group of men believed responsible for conspiracy against the police went down in history as it called into question the American government’s respect for the first amendment all taking place in a time on the precipice of radical revolution. After the leader of The Black Panthers, Bobby Seale, was dismissed from the case, the men ultimately tried in court were David Dellinger, Rennie Davis, Tom Hayden, Jerry Rubin, Abbie Hoffman, John Froines, and Lee Weiner. They are known by history as “The Chicago 7.”

An outrageously ambitious film that had been slated for production for over a decade, it was unclear whether ‘The Trial of the Chicago 7′ would ever make it to theatres. Although the ongoing pandemic has harshly limited the film’s theatrical release and it is most readily accessible with a Netflix subscription, the highly anticipated movie has in fact achieved completion, and it’s a masterpiece. Written and directed by the acclaimed The West Wing creator, Aaron Sorkin, the film follows the events of the Chicago riots as well as the trial of the alleged conspirators. With an outstanding cast featuring Eddie Redmayne, Sacha Baron Cohen, Jeremy Strong, Yahya Abdul-Mateen II, and Joseph Gordon-Levitt, a pertinent history lesson, and a remarkably inspiring call to action, The Trial of the Chicago 7 is a must-watch film.

‘The Trial of the Chicago 7’ – An Unbelievably True Story

The first facet of The Trial of the Chicago 7 that deserves praise is the extraordinary characters, uplifted by the cast’s stellar performances. It is an extremely difficult task to imitate well-known figures from recent history, and on top of a few of the actors taking on new accents to best convey the real people they are portraying (Cohen’s Boston-meets-Californian accent is nothing short of miraculous), these actors completely committed themselves to fully embody their roles. Although the main cast is grouped together as “The 7”, what makes this crew special is the way they are distinct and often contradict one another.

Ranging from moderate to radically liberal to the leader of the Black Panthers, each actor is extremely effective in bringing to life the ideology of every individual, ultimately highlighting the brilliance found in the discourse between the group. Every character has their unique perspective on how to create change and their own response to being shoved into the spotlight of a national ideological crisis. Eddie Redmayne’s instinctually conflict-avoidant Tom Hayden often disagrees with the theatricality of Sacha Baron Cohen’s eccentric Abbie Hoffman; however, when the two argue the audience gains a wealth of insight into the minds of these two exceptionally brilliant and revolutionary men.

Another extremely effective feature of The Trial of the Chicago 7 is the way it executes turning its substantial historic source material into a compelling and entertaining film. Sorkin captured the perfect tone for the content of this movie, utilizing his trademark fast pace and quippy dialogue. The real trial lasted a gargantuan 151 days in court but in the film, Sorkin expertly guides the audience through all of the important moments, cutting out the fat without making a disorienting mess of the timeline of events as he skillfully weaves in and out of flashbacks as well as actual footage from American history.

Sorkin also infused The Trial of the Chicago 7 with the precise amount of comedy, largely stemming from Cohen and Strong, that perfectly rounds out the largely solemn and hefty message of the film. Sorkin proved he had a vision for how this story should be told, and he wholly delivered on creating a film as dense in historical significance as it is easy to watch.

Sorkin’s genius truly emerges when analyzing his impressive use of microcosm. The majority of the film takes place in a courtroom, which was cleverly written as a microcosm of American society during the late 1960s. Judge Julius Hoffman, masterfully portrayed by the commanding Frank Langella, is the dominating force that rules the trial. Effectively representing the authoritarian government of the time, Judge Hoffman is unyielding and blatantly biased against the will of the 7, often citing them as “out of order” and frequently charging them in contempt of the court.

The microcosm is best used, however, when depicting the relationship between Judge Hoffman and Bobby Seale. The only Black man on trial and without a lawyer, Seale is consistently silenced by Judge Hoffman whenever he attempts to speak up for himself. The judge relentlessly refuses to allow Seale to represent himself in front of the jury and when Seale continues to stand and share his point of view, Judge Hoffman orders he be gagged and bound. This is a clear representation of the way the United States government has silenced and abused Black Americans that have attempted to speak up for themselves in the face of injustice.

The inescapably eerie aspect of The Trial of the Chicago 7 is just how much of a reflection of modern times it is despite it depicting events that took place 50 years ago. The spirit of the social unrest that has utterly captivated the nation this year following the murder of George Floyd at the hands of the police, and the Trump’s administration’s response and retaliation that followed, is quite saliently captured in this momentous film. The most stunning and horrifying scenes of The Trial of the Chicago 7 are those that expose the reality of police brutality. Very few films have gone so far in addressing this crisis, but Sorkin includes multiple sequences of police attacking protestors.

These are very explicit moments that are likely responsible for the film’s R rating as they do not shy away from exhibiting all of the gore and terror that come with police attacking unarmed civilians with riot clubs that Cohen’s Hoffman clarifies are “made out of the same wood as baseball bats.” In addition to emphasizing all of the bloodsheds that occur with police brutality, Sorkin also exposes some of the nuances surrounding police misconduct that has become more evident today, specifically when Redmayne’s Hayden recalls police officers taking off their badges and name tags. Although the 7 alleged conspirators are technically the ones on trial, Sorkin is clever in placing the misconduct of the police as the true-crime of the film.

When prompted on just how relevant this story is in 2020, Sorkin asserted that the film is more about the modern-day than it is the past, “The script didn’t change to mirror the times. The times changed to mirror the script.” In the era of Trump, who has been known to reference his disdain for the unrest in Chicago frequently, The Trial of the Chicago 7 reveals itself to be a love letter to those putting themselves in harm’s way to topple injustice. When the protestors chant, “Whose streets? Our streets!” the voices of those who called for change from the Civil Rights Movement up to today’s Black Lives Matter Movement are evoked, empowered, and immortalized. Although the 7 men ended up going to prison, the legacy of the movement they are a part of is not diminished by the end of the film. Parting on a final chant, “the whole world is watching,” Sorkin seals this historic film with an inspiring call to action. Revolution takes time, but at least for now, hopefully, the whole world is watching The Trial of the Chicago 7.