A Tribute to Jeff Goldblum: The Most Recognizable and Beloved Guy in Hollywood 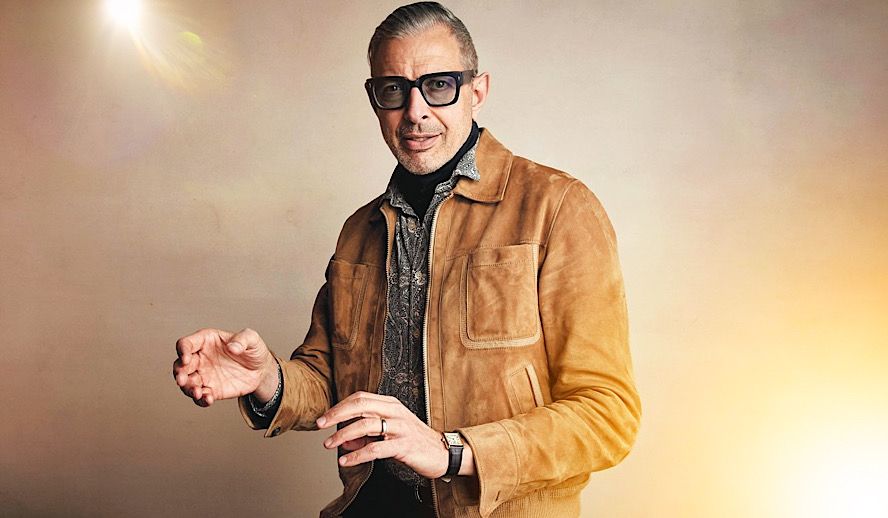 Jeff Goldblum has a range like no other actor in Hollywood and has consistently delivered hit after hit over the past five decades. From drama, action, comedy, and even horror, Goldblum has done it all. He’s proved himself as a performer, musician, and even a director, and has brought warmth and zeal to every project he’s been a part of. With over 134 acting credits, 14 soundtrack credits, and even a couple of producer credits on IMDb, Goldblum has certainly stayed busy over the years and has never slipped into a physical or artistic complacency, but always progresses further no matter what he’s doing.

Related article: A Tribute to Jim Carrey: The Master Performer On A League of His Own

Surprisingly, Jeff Goldblum has only been nominated for one Academy Award, Best Live Action Short Film, shared with Tiki Goldberg, for ‘Little Surprises’ in 1996, which he also directed. For all of his amazing and memorable roles, it’s hard to believe he hasn’t received a high number of accolades through the Academy and the Golden Globes. Jeff Goldblum has brought a lot of joy and emotion out in millions in some way or another and has made immense impacts on Cinema to the highest regard. He desires not only praise but to be bathed in compliments for his contributions to entertainment.

A Brief Look Into the Early Life of Jeff Goldblum

Born in Pennsylvania in 1952, Jeff Goldblum was introduced to entertainment at a young age as his mother was a radio broadcaster. His father considered an acting career early in life but landed on being a medical doctor, and even served in World War 2 as a major.  He had an older brother, who unfortunately died at the young age of 23, but had left a huge impact on Goldblum, and contributed to his love for music.

What many don’t know about Goldblum is that he is also an extremely talented musician and acclaimed jazz pianist. He’s shown off his musical skills in a number of his projects and has done a lot of work with Mildred Snitzer Orchestra in the past few decades. With ambition and talent pushing Goldblum further and further at such a young age, he decided to move to New York at the young age of 17 and pursue an acting career.

Goldblum studied under famous acting coach Sanford Meisner, who’s known for creating the Meisner technique, at Neighborhood Playhouse.  Goldblum’s special gifts were obvious at a young age, and he made his debut performance in the musical ‘Two Gentlemen in Verona’, which won two Tony awards and was nominated for several others. Goldblum was in his late teens and early 20s during this period, so he was quickly pointed out as a rising star. The success of the musical and the positive reception to Goldblum’s performance foreshadowed a career full of triumphs and artistic leaps that Goldblum still continues today. Even after getting on-camera roles later in his career, Goldblum continued to do Broadway shows from time to time and has been in a few shows in the past twenty years.

Not long after his debut live-acting performance, at the young age of 22, Goldblum would make his film debut in Michael Winner’s 1974 film ‘Death Wish’, starring Charles Bronson, where Goldblum played the character Freak #1, which, in hindsight, is a hilarious nod to Goldblum’s peculiar characters. That same year, he played a small role in Robert Altman’s film ‘California Split’, starring George Segal and Elliot Gould. Goldblum started to veer closer towards leading roles in film when he landed a role in Lawrence Kasden’s film ‘The Big Chill’ in 1983. John Landis, acclaimed director of ‘The Blues Brothers’ and ‘Coming to America’, put Goldblum as the leading man in his 1985 film ‘Into the Night’.

The film was met with mixed reviews, but Goldblum’s iconic status would start to take form in David Cronenberg’s ‘The Fly’, where Goldblum played one of his most memorable characters of all time, Seth Brundle. After this, Goldblum officially became a respectable and beloved actor nationally, and would soon internationally be one of the most recognizable and acclaimed actors in Hollywood.

Going From Established to Iconic

Goldblum reached new heights in the early 90s and was being offered different types of roles with wide ranges. He played a number of great characters in blockbuster and indie movies throughout the late 80s and early 90s, but arguably the movie most people think of when they think of Jeff Goldblum is ‘Jurassic Park’. Directed by Steven Spielberg, this film went on to win three Oscars and grossed over a billion dollars worldwide. Just a few years later, Goldblum won his first and only Oscar for directing the short film ‘Little Surprises’ in 1996. Goldblum was also making television appearances semi-regularly during this point in his career.

A few memorable ones are ‘Sesame Street’, ‘Saturday Night Live’, and ‘The Larry Sanders Show’. Goldblum was now comfortably nestling into icon status, and far surpassed being an A-list actor in Hollywood. After playing supporting roles in ‘Independence Day’ and the ‘Jurassic Park’ sequels, Goldblum was oscillating between his music career and his film and television career successfully, demonstrating his versatility in numerous artistic avenues and emboldening his transitional right from established actor to an iconic artist.

The Most Likeable Guy in Hollywood

Jeff Goldblum had several accomplishments throughout the late 90s and early 2000s, but starring in one acclaimed filmmaker Wes Anderson’s movies was a reinforcement of Goldblum’s versatility and power, and no matter what role he’s offered, he will do a fantastic job. Goldblum made his debut in Anderson’s ‘The Life Aquatic with Steve Zissou’ in 2004 and later joined Anderson again in his Oscar-winning film ‘The Grand Budapest Hotel’. Goldblum became a television star when he landed a regular role on ‘Law and Order: Criminal Intent’ in 2009 but only stayed on the cast for a little over a year. In the most fitting part possible, Goldblum struck gold once again after he joined the Marvel Cinematic Universe in Taika Waititi’s ‘Thor: Ragnarok’, and played the amazingly memorable Grandmaster.

Disney+ even eyed Goldblum to spearhead one of their most marketable shows when the platform was just beginning, ‘The World According to Jeff Goldblum’ was met with immense praise commercially and critically. There’s no doubt that whatever Jeff Goldblum does, he’s going to succeed and ensure anyone watching him will gain from his performances, or at the very least be entertained. We, at Hollywood Insider, happen to be enormous fans of Jeff. We support you, Mr. Goldblum, and will always root for you.