‘Jingle Jangle: A Christmas Journey’: The Closet thing We can Get to a Broadway Musical on Netflix! 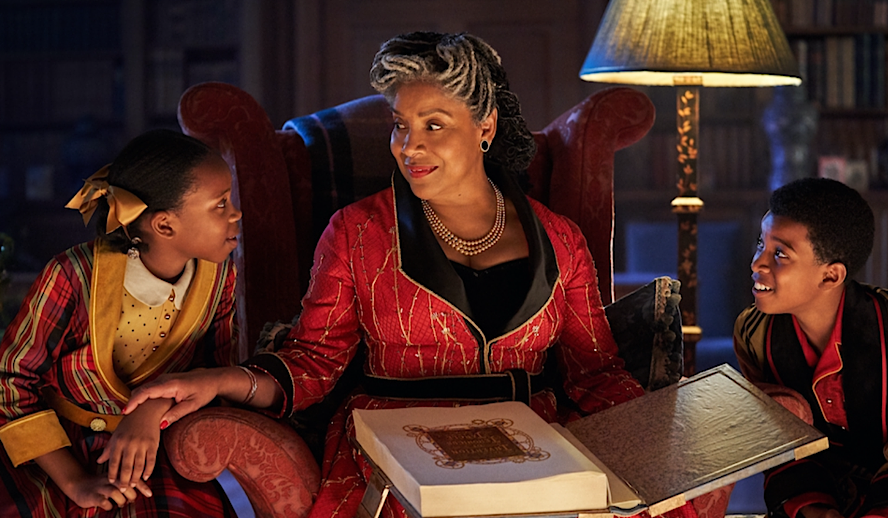 ‘Jingle Jangle: A Christmas Journey’: The holiday season gets a huge kick off with the Netflix original Jingle Jangle. A musical Christmas spectacular, the film never misses a beat. If you’re looking for a movie to get your holiday binge-fest started, Jingle Jangle may be the perfect movie for you. Get your Christmas cookies, fuzzy socks and some hot chocolate, Christmas time is here!

The film begins in Jeronicus Jangle’s world of wishes and wonders: Jangles and Things, a shop brimming with magical inventions. Young Jeronicus is played by the magnificent Justin Cornwell, a triple threat who steals the first few minutes of the show. Viewers who dive into the wonderful world of Jingle Jangle quickly find out that this isn’t just any Christmas movie. This film does just about everything well, from the electric song and dance numbers to costume design that compliments each character to perfection, Jingle Jangle is a whole new world of Christmas fun!

The Possibilities Are Limitless!

The film also makes honorable strides in diversity. Written and directed by David E. Talbert, the theatre-maker initially had the idea of a magical Christmas experience for the stage but continued to run into issues establishing a sound budget for his project. According to Fast Company, that’s when he turned to Netflix for production: “Having made a film for Netflix in the past, 2017’s El Camino Christmas, Talbert decided to bring the idea to Scott Stuber, head of Netflix’s original film division. “Before I started writing, Nick Nesbitt, the [Netflix] executive overseeing the project, said…‘As you’re about to write this, I want you to write your imagination. We’ll figure out the budget later,’” says Talbert regarding the greenlight that changed his creative life.

And Netflix’s pretty pennies shimmer through the screen as the production quality of Jingle Jangle is truly something to marvel at! Beginning with a stunning opening scene with acting legend Phylicia Rashad, the movie delves into the classic “once a pon a time” formula, emerging audience members in a vibrant storybook. One of the things that makes this movie truly sensational is it’s polished CGI. You have to hand it to the animation department here; the film’s computer-generated images are refined and buffed to perfection— they nearly beam to life through the screen. And sometimes those animated objects really do spur to life in the film.

Ricky Martin plays the mischievous Don Juan Diego, an animate invention gone south and one of the centerpieces of the main conflict of the film. As Jeronicus begins his career as an established inventor, his apprentice Gustafon soon is coerced by Don Juan Diego to pull the rug under Jeronicus and build his own empire. Jeronicus’s fall is a great one, and it results in his wife Joane Jangle (Sharon Rose) no longer being able to carry on, leaving him and his daughter Jessica (Anika Noni Rose) to try and pick up the pieces of everything Gustafon stole, but Jessica too leaves the picture as the stable foundation Jeronicus once embodied had now crumbled. All of this riveting detail is told in stunning animation, bringing the events to life in computer-generated puppetry.

‘Jingle Jangle: A Christmas Journey’ – A Movie Musical for the Ages

When the movie comes back up for air, we’re sitting with the title actor of the movie: Hollywood legend Forest Whitaker takes the stand and is a living testimony to what happens when the magic inside you gets stolen. A weird old man, Whitaker plays a struggling pawnshop owner who no longer has any more tricks to revive his invention spirit.

Although the film may seem to touch lows after the first act, song and dance still bring the scenes back to life. Keagan Michael-Key plays the older version of Gustafson and he does it wonderfully. Watching this show with such high-quality musical production, your living room couch starts to feel like a front-row seat to a Broadway show. While Broadway’s announced it’s going dark until May 2021, movie-musicals like Jingle Jangle are the closest thing we’ll be able to get to the real thing.

Truly the music is one of Jingle Jangle’s strongest assets, it’s no surprise it’s produced by the Grammy Award-winning John Legend. If you want to test out the movie before actually watching it, try listening to the soundtrack on Spotify. Listen to “This Day”, “Magic Man G” or “Square Root of Possible” to get a sense of what this movie is really about. While it’s chock full of fun for all ages, it also has some very serious undertones and implications that give it the weight it needs for the longevity it deserves.

As the first act begins to come to a close, Journey (Madalen Mill), Jeronicus’s granddaughter enter’s the scene. While Jerounicus brushes her off at first, Journey starts to reimagine the potential still in Jeronicus’s shop and magically blossoms their family’s possibilities. As Journey takes the front lines of the movie’s themes, she begins to embody multiple angles of representation. Not only is she a positive example of a strong young woman, but she’s also a young Black woman who a genius at mathematics! Well, fake magical movie math but math nonetheless!

As the film carries on Jingle Jangle begins to unwrap many thematic presents: we see the redemption of the stereotypical absent father-figure trope as Jeronicus, Jessica, and Journey all begin to rekindle their relationships. We see an analysis of what success and failure can mean when you reimagine your possibilities. In the end, the themes Jingle Jangle presents are as wondrous as any dazzling picture those Netflix animation magicians can conjure up.

In the end, it’s about believing in those you love. While there’s far more to Jingle Jangle that makes it a Christmas delight, I’d advise you to see it for yourself, or better yet, grab the whole family and kick off the Holiday season on a note of joy and wonder. Stream Jingle Jangle now on Netflix and enjoy the magic of Christmas.