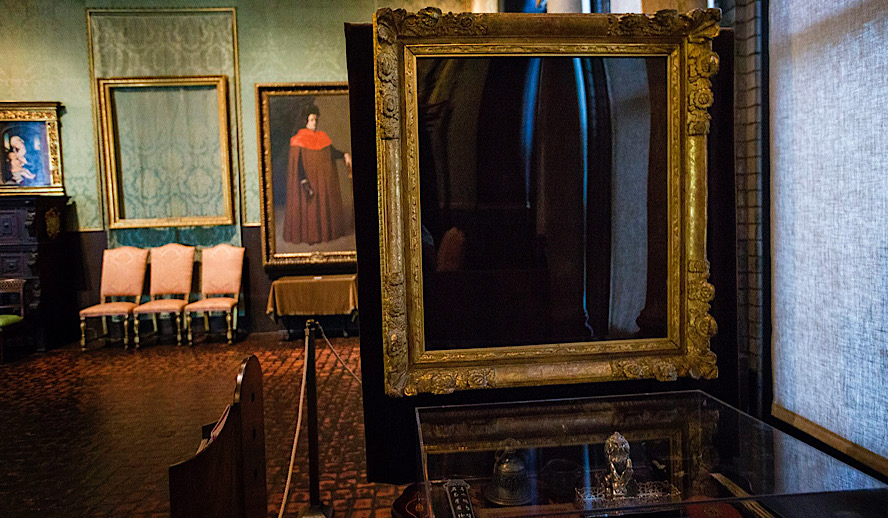 Photo: ‘This Is a Robbery: The World’s Greatest Art Heist’/Netflix

Gentlemen, This Is a Robbery.

Netflix has made a name for itself over the past five years releasing several hit-limited documentary true-crime series. From the eccentric, humorous Joe Exotic in the hit series ‘Tiger King: Murder, Mayhem and Madness’ to the darker, more intense subject matter in ‘Night Stalker: The Hunt For A Serial Killer’ audiences have been captivated by these informative documentary series that depict and tell the story of a real-life crime. ‘This Is a Robbery: The World’s Greatest Art Heist’ is the latest addition to Netflix’s true-crime catalog documenting the 1990 theft of thirteen works of art at the Isabella Stewart Gardner Museum in Boston and the resulting search for the perpetrators and paintings.

This series, while not as engaging as the infamous Joe Exotic, lays out a weaving tale of mystery and intrigue that wrapped me up from the opening sequence. I was unfamiliar with the event before watching the series from director Colin Barnicle but found myself immediately taking to Google to search for more information about the case. The strongest element of the series has to be its subject matter — the depths to which this series goes had me shocked. This is not just a story about a couple of guys stealing a few paintings. Without delving into spoilers for those who are not already familiar with the true events, the scope as to the significance of both the actual works of art as well as the theft are incredibly interesting and will without a doubt hook you.

More Than The Art

As previously stated, the strength of the series is its subject story and the absurd depths it goes to. If the docuseries was just about the heist itself, that would’ve been an engaging enough concept. The filmmakers expand further than just the theft itself, they explore the many theories as to how this improbable crime was committed, who did it, and why? The question as to why easily becomes the most interesting as quickly the docuseries shows that this is about more than just a ‘James Bond’ villain stealing and selling expensive art. Murders, the mob, and infamous art thieves are all explored in connection to this heist and I ate up every minute of theorization. The docuseries does a great job at making you as an audience member feel like you are solving the mystery along with the subjects on screen.

The theories fill most of the runtime of the series as the filmmakers explore the leads the police and FBI tracked even if they in the end go cold. One theory that specifically had me interested is that of famed art thief Myles Conner. Conner is one of the most memorable parts of the docuseries and left me wanting more — I could watch an entire documentary just about Conner and his decades of art thievery.

The extensive theorization does end up making the middle of the docuseries feel a little uneven when it comes to pacing, but it was not a big enough issue for me to check out of the series. Another gripe that many may have with the series is its ending. The end of the series leaves audiences still with many questions and feeling unfulfilled but I believe that to be the intention of the filmmakers. The ending mirrors real-life and the feeling of investigators who spent their lives investigating this modern-day head-scratching mystery which I thought was very effective even if it is not the traditional release a true-crime documentary usually offers.

The series is very well constructed from a technical standpoint. While still hitting all the usual beats of the true-crime genre, fans of similar series will feel right at home. The editing is slick and intuitive, guiding the audience through the web of mystery surrounding the heist. The series expertly utilizes map graphics to give the audience a sense of space that is helpful and effective.

The filmmakers also use a variety of red markings on photographs to signify the statuses of various important people in the story. The cinematography is visually appealing and non distracting from the story — a balance not always easily struck. Interviews and testimonials are shot with lots of zooms and camera movement that keep them feeling fresh. The shots inside the museum are exceptionally shot and really bring out the beauty in the works of art that hang from Gardner’s walls.

The series uses the traditional true-crime trope of reenactments which could have felt tired if not for the care taken in the aesthetic of the scenes. Specifically, the reenactments of the actual heist are dark and methodical and, even though they are shown repeatedly, I was engaged every time they appeared on the screen. There is some startling imagery that is used in these sequences that will especially stick with audiences long after viewings. The use of sound in the series is also very creative, without the sound design and score to guide the audience’s emotions the series would feel tonally erratic.

Luckily, the sound in the film perfectly fits and reflects the tone of the subject mattering being covered which was another impressive element of the series. The docuseries is very digestible, coming in at just 4 episodes each with about a 50 minute run time to have you in and out without the commitment that some other docuseries require.

The Art of Boston

The city of Boston feels like its own character in the docuseries — the shots of the city are sweeping and beautiful. The docuseries is especially relevant for covering an event that took place 30 years ago. There are figures who pop up in the series that I recognized from other films that covered true stories in the Boston area such as former newspaper editor Stephen Kurkjian, who was played by Gene Amoroso in the 2016 Academy Award Winning film ‘Spotlight’ that covered The Boston Globes’ investigation into child sex abuse in Boston by Catholic Priests.

The film also starred Michael Keaton, Mark Ruffalo, and Rachel McAdams. Another recognizable figure was Richard DesLauriers, Special Agent in Charge of the FBI in Boston, who was played by Kevin Bacon in Peter Berg’s ‘Patriots Day’ also starring Mark Wahlberg, Michelle Monaghan, and J.K. Simmons. The inclusion of the recognizable Boston figures made the large city feel much more like a recognizable small town which added to the mystique of the inability to solve the case of the missing art. The content that was covered regarding the Boston mob was as engaging of a mob story as I’ve seen since Martin Scorsese’s ‘The Irishman’ starring Robert De Niro, Al Pacino, and Joe Pesci.

The filmmakers clearly have a passion and respect for the city of Boston — this respect carries over to the art. Just by the editing and shot selection of how the camera lingers on some of these beautiful paintings, it is clear to see the reverence the filmmakers have for the art. The testimonial interviews from some of the caretakers and positions of leadership at the museum share that reverence and make it hard as an audience member to not feel the same towards the pieces — this makes it all the more impactful that these 13 works of art were stolen and so quickly vanished.

While not perfect, ‘This Is a Robbery: The World’s Greatest Art Heist’ is another hit in Netflix’s array of options in its true-crime library and one that kept my attention throughout. While the ending may not work for all viewers, I believed it to be a fitting unconventional end to an unconventional real-life story. While the extensive theories can drag at points, it is not enough to deter me from recommending all lovers of art, true-crime, and mob stories to give this one a shot.

Stream ‘This Is a Robbery: The World’s Greatest Art Heist’ on Netflix today. Check out Netflix’s next docuseries ‘My Love: Six Stories of True Love’ coming to the streaming service on April 13th.