Must Watch: Damien Chazelle Explores How Far Artists Go for Greatness in ‘Whiplash’ 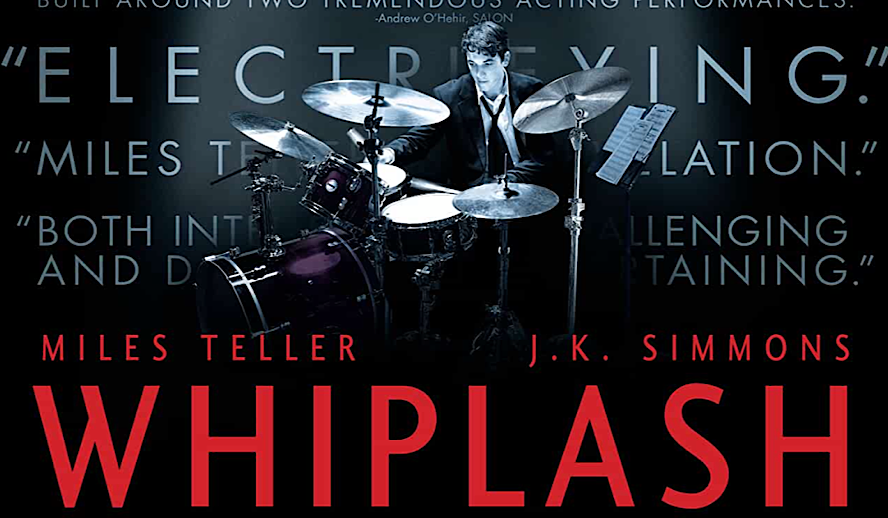 Whiplash, written and directed by Damien Chazelle, is a gritty, fast-paced glimpse into the world of competitive jazz, seen through the eyes of a naive yet ambitious college freshman, Andrew Neimann. Neimann, portrayed artfully by Miles Teller, meets the infamous studio band director, Terrence Fletcher (played by Academy Award winner J.K. Simmons), and starts his descent into Fletcher’s ruthless mentorship to determine if Neimann shows what can only be defined as true potential.

Sharone Mier’s cinematography highlights this heart-pounding script in an unparalleled way with the camera’s extreme juxtaposition to the action, creating a rigid environment that holds the audience captive. Subtly, with a touch of a genius, the world of Whiplash fluctuates as Neimann’s proximity to Fletcher’s wrath grows. As their relationship develops, the viewer is trapped in their intoxicating game, you want more with every second and you can’t bear to look away. Meir emphasizes with every shot that Terrence Fletcher is the God of his own universe, making every moment he spends on screen a sacred prayer left at his altar.

Chazelle’s intelligent direction of J.K. Simmons in particular lends to this divine feeling. When Terrence Fletcher enters a room he demands rapt attention from those around him. Simmons understood this well, using his character’s explosive temperament and pompous attitude to round out his already stellar performance. Miles Teller plays off of this energy with brilliant moments of submission, most notably his willingness to push himself to the edge for the sake of “earning the part”, a line used as Fletcher’s lingering and deadly threat throughout the film. The supporting cast only adds to this precarious atmosphere- most of the musicians do not have lines, but instead, add contrast to Fletcher and Neimann’s electric pairing. They reflect what the audience is thinking: Would I do this? Would I ever go this far?

Alongside Mier’s intimate shooting angles, Chazelle uses another vivid motif: the literal use of blood, sweat, and tears. We are introduced to this imagery immediately with the opening shot, Andrew Neimann practicing drills at lighting-fast speed, drenched in sweat, and lost in immense concentration. This is soon followed by tears, utilizing the shock value associated with seeing a grown man cry. For the audience, this is a poignant reminder that our characters are human at the very core and we are drawn back to understanding Niemann’s basic motivation. He’s just a kid with a dream, and he’s so close to achieving everything. Blood is tactfully used to oppose this same sentiment, serving as a constant reminder that with great glory comes great pain. Chazelle accomplishes something magnificent in this movie through the language of literal metaphors by focusing on Neimann’s pain. Watching blood pour onto a still-beating drum kit, breath held with every second Terrence Fletcher demands more from his students, the audience is still with anticipation. It is a moment that feels it could stretch on for eternity.

Whiplash brings to light the ever-present argument that the world has become ‘too soft’ in an attempt to make people feel as if what they have to offer should be enough. By giving out too many participation trophies we begin to spread the idea that complacency is standard, and as a result, we have lost the very essence of true art. “There are no two words in the English language more harmful than good job,” Terrence Fletcher bitterly remarks, while discussing the story of Charlie Parker and Jo Jones – In 1937, Parker, a talented yet green saxophonist makesa mistake in front of one of the largest swing bands in the nation, and Jones throws a cymbal maniacally at his feet. Whiplash changes this story to fit their own narrative, Jones instead throwing a cymbal at Parker’s head, almost decapitating him, just as Fletcher ruthlessly flings a chair at Neimann. To the public eye this story is complete insanity, but for someone with a drive to succeed, to be the greatest, this would be seen as another task to complete in the journey of achieving a seemingly unattainable goal. Tales like Charlie Parker’s are not few and far between, but instead reflected in every performance artist and are now projected onto the big screen with Whiplash.

The madness is not solely accredited to Fletcher, however, but also in the surrounding cast of musicians. Carl Tanner, played by Nate Lang, utilizes the caste system (When you’re in the ‘core’ group of musicians, you are automatically superior to anyone else) to push Niemann around in a way reminiscent of hazing. Niemann, when not under Fletcher’s wrath, carries himself as if he is a cut above the rest. These holier-than-thou attitudes are evocative of a reality Chazelle experienced, his harrowing days spent in a competitive jazz band at Princeton High School. Again, artists find themselves seen in this world of cutthroat attitude, at home in the anger and tumultuous relationships. This finally begs the question: Where is the line between madness and genius? Are they able to exist without the other?

Every Moment Could Be The Last in ‘Whiplash’

Watching Whiplash is like someone telling you their most intimate secrets- it’s a conversation that almost feels like an intrusion, a society that we are now grandfathered into. Miles Teller does an extraordinary job at spending every second on screen as if it could be his last, communicating perfectly that this is simply the way an artist must live. To create as if you will never have the chance to do so again. After watching Whiplash, the audience is left breathless, understanding that they have witnessed a truth that seems both impossible and remarkable, and summed up with a quote spoken by Andrew Neimann: “I don’t want perspective.”

To be something truly great, one can never stop believing in their goals, no matter the grandeur. No one ever made a movie about the man who gave up on his dreams, and masterpieces such as Whiplash reaffirm the need for such “method to the madness” style films. When being asked about how such hostile art can exist in our reality, Damien Chazelle gave the perfect answer as to why Whiplash is so affecting, even amidst the tension. “I’m interested in people at work—the process of people making something or working toward a goal, and what the prices of that goal might be. People who are really driven—I like those kinds of characters. There’s a lot of inherent drama in watching unreasonable people against the real world.” Whiplash is a story that will stay within you long after the final beat of Neimann’s drum and is highly recommended as one of the greatest films of the 2010s.