‘City on a Hill’: No Rest for the Wicked in Boston Crime Drama 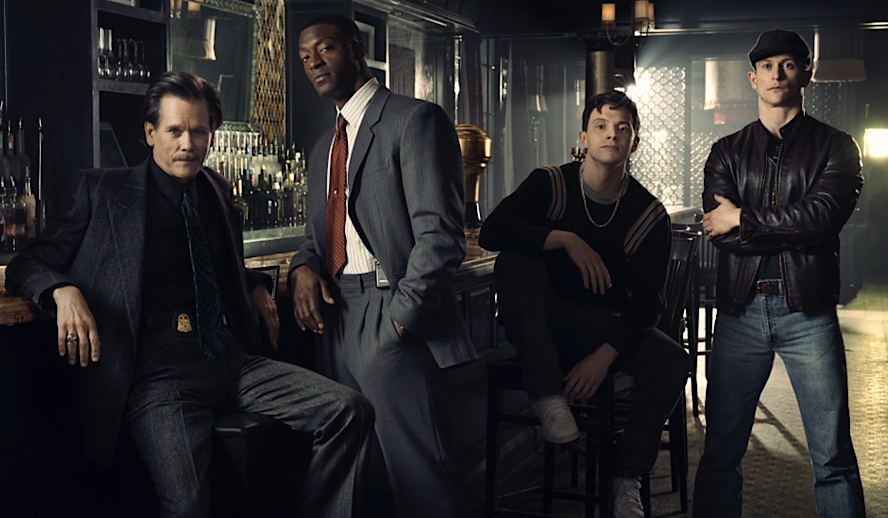 Photo: ‘City on a Hill’/Showtime

Kevin Bacon, Aldis Hodge, and Jonathan Tucker star in Showtime’s gritty crime drama ‘City on a Hill’. Set in Boston in 1992, the city’s crime and corruption have reached a boiling point. Even among the cops and robbers, it’s difficult to tell who are the real “bad guys.”

Bacon plays corrupt, cocaine-snorting, yet revered FBI agent Jackie Rohr, whose infidelity and family issues are the least of his life’s complications when he takes on a new case with Assistant District Attorney Decourcy Ward (Hodge) to find the crew that killed three armored car guards in a robbery gone wrong. But it’s easier said than done since the crew hails from Charlestown, a Boston neighborhood notorious for producing bank and armored car robbers and for the residents’ legendary code of silence. The robbery crew is led by Frankie Ryan (Tucker), a blue-collar grocery store clerk who needs the stolen money to support his extended family.

Related article: A Retrospective – Matt Damon’s The Bourne Series: One of the Best Trilogies Ever

Related article: ‘What Would Sophia Loren Do?’ is a Short but Sweet Story of Celebrity Fandom and Representation

The writing style of ‘City on a Hill’ takes a realism approach, including many anecdotes fleshing out the characters more than supplementing the plot, along with a near-constant litany of profanities. ‘City on a Hill’ is also very funny at times in that dark way that intense dramas can be, which is to the show’s benefit. Packed with incredible performances, nuanced dialogue, and impressive scope of storytelling, ‘City on a Hill’ is a show you will relish between episodes.

‘City on a Hill’ – Hometown Heroes

‘City on a Hill’ is a fictional account of how violent crime was reduced in Boston through the so-called “Boston Miracle,” a police initiative to reform youth gun violence. The concept for the show was first conceived by Ben Affleck, who shared the idea with series creator Chuck MacLean, so it’s no wonder that ‘City on a Hill’ is reminiscent of films like ‘The Town’ and ‘The Departed’, the latter of which stars Matt Damon, who is an executive producer of the series along with Affleck. Through long-form storytelling, the gritty realism of ‘City on a Hill’ also evokes ‘The Wire’ and ‘Homicide: Life on the Street’, and ‘Homicide’ writer Tom Fontana is another executive producer and the showrunner of the series.

When watching period pieces, it feels prudent to ask how the story is relevant to today: what about Boston in 1992 speaks to the present moment? ‘City on a Hill’ certainly has a lot to say about blatant government corruption, racism, police brutality, and poverty-driven crime, to name only a few things. Corruption and crime, in particular, have reached a breaking point in seemingly lawless Boston, and Decourcy is determined to change the system from within. Originally from Brooklyn, Decourcy is at an immediate setback for being an outsider in this insular Boston community. Moreover, as the only Black attorney, he is an outcast in the DA’s office because the other attorneys think he is only an affirmative action hire and the cops he works with on prosecutions treat him as a traitor for having championed a police reform initiative. Though the odds are against him, Decourcy has a vision of change and the ambition to execute it. He wants to do what no one has ever done: take down a crew from Charlestown and show this city that no one is above the law.

Bacon as FBI agent Jackie Rohr is mesmerizing in a way that’s similar to Hugh Laurie’s Dr. House—he approaches everyone and everything in his life with paradoxical lighthearted enmity, and his unpredictable nature is engaging to watch. Though calling him a total jerk is an understatement, Jackie is a clever investigator and has learned how to work the system (and extralegal supplements) to serve his own ends. He views many relationships as transactional and humorously takes a “Massachusetts tax” back for himself when paying off colleagues or confidential informants. As Jackie says, “I treat everyone the same way: bad.”

Despite their opposing moral viewpoints, Jackie and Decourcy become unlikely allies in the endeavor to catch the crew that murdered the armored car guards in nearby Revere. Decourcy’s reasons for pursuing the case are clear, but Jackie’s less so. Perhaps he’s chasing his former glory after taking down a notorious crime family ten years prior; perhaps he really does strive to be the anti-hero, doing his job well, if not always by the book or legally; or maybe he just finds it amusing that Decourcy thinks he can make a difference in this city and is along for the ride.

As Jackie and Decourcy dive head first into their partnership, Decourcy begins to see that Jackie knows how to work the system to his advantage (at anyone’s expense) and quickly learns that the road to eradicating violent crime is Boston is going to necessitate coloring outside the lines. Decourcy’s orderly idealism and Jackie’s drug-fueled chaos embody the Apollonian and Dionysian dichotomy, and as the series progresses, it’s fascinating to watch them become more like each other or struggle to resist those changes.

The Boys from Charlestown

Since the residents of Charlestown don’t talk to cops (or the few that do rat out their neighbors don’t have long life expectancies), Jackie and Decourcy can’t get any information on the Revere robbery. They take an obtuse approach to the problem by convening a grand jury to preside over a missing person case they believe has culprits in common with the robbery and use the procedure as a fishing expedition. It’s a confusing legal and narrative device, but once the investigation gets underway, the show flourishes. Though the crime thriller aspects of the show are entertaining, the best parts of ‘City on a Hill’ are the characters, and the plot is certainly a great vehicle to explore the characters and their relationships with one another.

There are many solar systems of characters in the show, revolving chiefly around Jackie, Decourcy, and Frankie. Frankie’s brother, Jimmy (Mark O’Brien) is the guy who never emotionally matured from high school and is the perpetual screw up little brother. But he’s smarter than he looks, and he wants in on Frankie’s next score. Tucker and O’Brien have great chemistry as brothers who are constantly at odds or at each other’s throats, and insight into the lives of the robbers as well as the cops and attorneys is one of the show’s strengths.

Though all the women in the show initially take secondary roles to the main male characters—Jackie, Decourcy, Frankie, and Jimmy—there’s no shortage of agency or power. Amanda Clayton is razor-sharp as Frankie’s wife Cathy, a hairdresser who’s really running the show at the Ryan house. Decourcy’s wife Siobhan (Lauren E. Banks), a lawyer who comes from money, is focused on a nonprofit active at their church and in the Black community. Jackie’s wife Jenny (Jill Hennessy) has been put down by Jackie for years, and she begins to retake her life and find her power.

In particular, Sarah Shahi is riveting as Rachel Benham, an investigator for the county sheriff’s office assisting Decourcy and Jackie’s investigation. The predominantly white colleagues and civilians she encounters constantly point out her Persian heritage and ask, “Where are you from?” and “What are you?” Rachel is smart, tough, and driven, and on top of it all, we see how much the othering affects her throughout the series and in an especially well-performed monologue in the fifth episode.

The greatest strength of ‘City on a Hill’ is the characterization on all scales, from the central characters to those that only appear a few times. There’s a vibrancy to the often-gray landscape of the show that’s brought out not only by the neon windbreakers leftover from the ’80s but also through the great mix of writing and performances that breathe life into the characters, immediately making them tangible. By the end of the first season, it’s clear there will be some cast shakeups going forward, but there’s also a strong foundation for many characters heading into the second season with renewed vigor. Depending on when production resumes in light of the coronavirus pandemic, the second season of ‘City on a Hill’ will hopefully be airing in 2021.

Stream season one of ‘City on a Hill’ on Showtime now.