Must-Watch: Led by an Electric Ethan Hawke, ‘Tesla’ An Inventive Take on the Historical Biopic 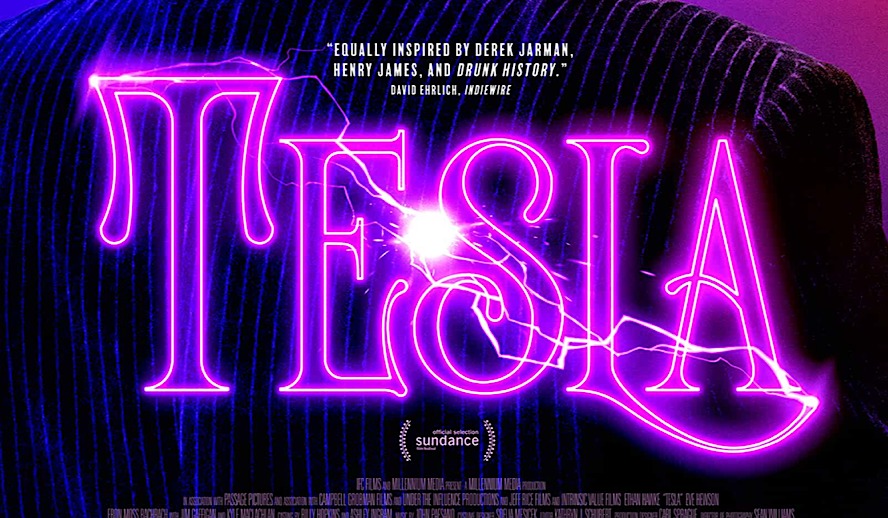 Who was Nikola Tesla? Viewers of Michael Almereyda’s new biopic, which stars Ethan Hawke as the enigmatic inventor, may find themselves with more questions than answers by the end of the film. Perhaps, however, this is by design. The focus of Almereyda’s narrative, in its attempts to meaningfully synthesize Tesla’s life, career, and impact into its 102-minute runtime, flits like the electric bolts inside of one of the inventor’s famous coils. Also, like the Tesla coil, the film is dazzling to behold, but one might need to consult Google to fully understand what exactly its purpose is.

That too seems to be intentional. Google is in fact mentioned so often in this film that it’s practically another character in the film, like New York is in You’ve Got Mail. Eve Hewson, who plays Tesla’s financial go-between turned love interest, Anne Morgan, frequently steps out of character to Google search Tesla and his contemporaries and share the results directly with the audience. Watching Anne Morgan anachronistically poring over Tesla’s image results is like watching someone hopelessly Internet-stalk an oblivious crush, and it serves to provide some substance to a mostly inert romantic coupling. Tesla’s love life, like the state-of-the-art motor the inventor prioritizes, remains sparkless. By the way, Tesla has 34 million Google results, whereas Thomas Edison has over 64 million results.

Related article: The Rise of Matt Damon: A Tribute to the Highly-Deserving Hollywood Star

It’s this Tesla/Edison rivalry that yields the film’s highest voltage drama. Edison briefly employs Tesla, but Tesla is disheartened by the experience. In a letter to a friend, he complains that Edison is always talking but never listening, and he remarks that “nothing grows in the shadow of an oak.” Tesla is an immigrant from the Austrian Empire at a time when many Americans did not hold immigrants in high regard, but he also displays social anxiety to an extent that some historians believe he was on the autism spectrum. Perhaps due to intimidation, or perhaps due to his own neuro-divergence (some historians believe that Edison had Asperger’s), Edison seizes upon Tesla’s insecurities. “Is it true you’re from Transylvania?” Edison asks. “Have you ever eaten human flesh?”

“‘Pity the poor immigrant’, as the song goes,” narrates Anne Morgan, quoting Bob Dylan. Tesla believes that Edison owes him 50,000 dollars, but Edison refuses to pay. This event, playfully dramatized in the film with an ice cream cone fight, completely corrodes Edison and Tesla’s working relationship and sets off the War of the Currents. Tesla defends alternating current, while Edison denounces it as dangerous and unstable and prefers direct current as the more predictable alternative. It’s no coincidence that Edison’s dismissal of alternating current resembles the demagoguery-disguised-as-rationality some continue to countenance in modern American politics. Despite being a scientist, Edison is willing to traffic in nativism to appeal to the biases of the country at large.

The War of the Currents, while mostly a battle of ideas, eventually does draw blood in a macabre display of political theater. Here, we see Edison at his most diabolically bureaucratic. In his masterful turn as Edison, Kyle MacLachlan retains the all-American charm he displayed in Blue Velvet and Twin Peaks (Edison even orders pie for dinner) while also embracing a subtle Lynchian malevolence. This kind of role is becoming something of a trend for MacLachlan–he also appears as a somewhat ominous antagonist in Josh Trank’s Capone, also released this year. Anyway, when interviewed by a death penalty commission member regarding what form of electricity would best be used to execute a man, Edison insists he is against capital punishment, but then cunningly recommends alternating current as the safest method of electrocution.

It’s a masterstroke of political doublespeak; the kind that too often seems necessary to be a power player in American society. When Edison’s machinations backfire, the film finds him essentially paraphrasing The Narcissist’s Prayer. In an inspired scene, Almereyda presents a dinner between Edison and Tesla during which Edison apologizes for his actions during the War of the Currents and offers to invest in Tesla’s next venture. Anne Morgan then announces that the dinner never happened. It’s a wistful examination of what could have been if not for inherent small-minded discrimination, and it demonstrates the difference between the fates of the two men. Edison’s failures do not diminish his standing in his society or with his investors, while Tesla’s successes are often overlooked and his missteps are over-exaggerated. This isn’t to say that Edison does not struggle, but he is insulated. Edison, the hometown hero, is a powerhouse who enjoys the stability of constant capital. Meanwhile, the out-of-town oddball Tesla is forever at the mercy of the American oligarchy and regarded as an errant spark.

Almereyda might have centered the entire film around this confrontation, had it not been done elsewhere with 2017’s The Current War, starring Benedict Cumberbatch and Tom Holland, not to mention a 2010 episode of Drunk History. But Almereyda’s film is about Tesla, and Almereyda’s Tesla does not seem to regard Edison as his true adversary. Tesla is battling ignorance itself and attempting to wrangle the elemental forces of Mother Nature. Ethan Hawke, who continues to develop new nuances as a performer, broods, and growls through the film, his sobriety only punctuated by the exultant flashes of scientific breakthrough.

As with Benedict Cumberbatch’s portrayal of Alan Turing in The Imitation Game, Tesla here is shown to be out-of-step with the titans of his society, and no amount of triumph can assuage that. It’s ironic that the film references the Bob Dylan song, which goes, “I pity the poor immigrant/ Who wishes he would’ve stayed home/ Who uses all his power to do evil/ But in the end is always left so alone.” Tesla is certainly disadvantaged by Edison’s antipathy and society’s routine discrimination, but the film does not remove his agency by portraying him simply as a victim or a saint.

Perhaps as a reflexive reaction to his own experiences, Tesla himself is an alienating figure. He abandons society for the isolation of Colorado Springs, which happens to be where Tesla is introduced in Christopher Nolan’s The Prestige, unforgettably played in that film by David Bowie. Tesla, like Bowie, begins to openly ask, “Is there life on Mars?” While this sort of forward-thinking imagination may appeal to 21st-century magnates like Elon Musk, who named his car company after Tesla, it proves to be too much for his early 20th century investors. Contending with the reality that Tesla is destined to fizzle out, Almereyda spends the latter part of the film dialoguing with the mythic status Tesla would go on to attain after his death.

Ultimately, Almereyda’s film is nearly as inventive as its subject. Joining the ranks of other great recent biopics that have creatively incorporated music, Almereyda has Tesla anachronistically croon, karaoke-style, “Everybody Wants to Rule the World” by Tears for Fears. It’s a moment that’s both triumphant and melancholic, and one imagines Tesla would have approved, considering the band’s pioneering efforts in the realm of electronic music. Tesla, as Anne Morgan narrates, “was always looking ahead, projecting himself into the future.” Despite stymying from his detractors, Tesla envisioned the invention of the internet, self-driving cars, and the ability to communicate with beings on other planets (be they human or not). “Maybe he overreached,” ponders the film’s narration, “Or maybe the world we are living in is a dream that Tesla dreamed first.”

Tesla is available for rental or purchase on YouTube, Google Play, Vudu, and Amazon Prime.

Trent Kinnucan
Trent Kinnucan is a film and television critic, with over 5,000 film hours logged to date. He is devoted to maintaining an encyclopedic knowledge of cinema, with consideration for its history, its cultural impact, and its ability to create social change. Trent enjoys finding films that amplify voices otherwise unheard, and reveal images otherwise unseen. Trent’s interest in media coverage as a way to inspire meaningful dialogue led him to Hollywood Insider, a media network that consistently prioritises journalism and content with a purpose. Trent also recognizes that media is meant to be enjoyed, which aligns with Hollywood Insider’s penchant for tackling complex issues with levity and original insight. Trent hopes to share his love of film with others, and to help further expand the bandwidth of artists with something to say.
[tptn_list]