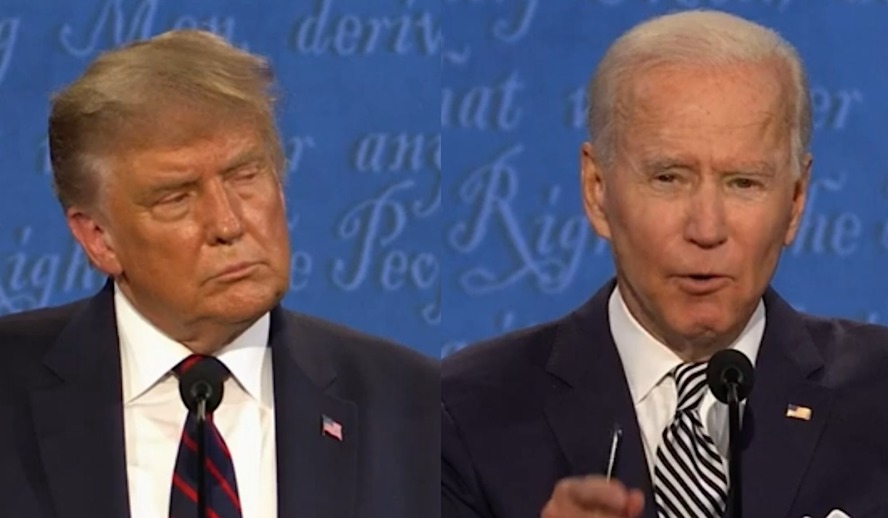 In a time of unprecedented chaos, this week’s presidential debate between President Donald Donald Trump and Vice President Joe Biden mocked those expecting clarity. How low can we go? A phrase once associated with the joyful childhood game of limbo has taken on a new connotation in the calamitous year of 2020. In a night full of deflection, name-calling, and incessant and trademarked-interruption, the first presidential debate of the 2020 election has been cited as “the worst presidential debate in living memory” as well as a “hot mess inside a dumpster fire inside a trainwreck.” While these assertions may not be too controversial to the majority of viewers of the debate between President Trump and Vice President Biden, was it really that unexpected? Trump remained an antagonistic presence during the event while Biden seemed lost in the shuffle of it all, as many had anticipated. Even if the shouting matches and under-the-belt jabs should have been expected, it is clear that this was not the debate the vast majority of Americans had hoped for, or the one Americans deserved.

How can we discern what exactly led the first presidential debate to this disappointing outcome? One way is to understand the expectations both candidates were set to face before walking onto the debate stage Tuesday night. Based on average polling numbers, Trump has been steadily trailing Biden by roughly 7 points for the past several months. Going into this debate, Trump was tasked with attempting to tighten the race where Biden, on the other hand, did not have quite as much pressure on him. Frequently criticized by Trump as “Sleepy Joe”, Biden’s expectations had been set pretty low by Trump himself, as Biden simply had to stay awake and on the topic in order to impress voters. Whether or not these presidential candidates achieved their set goals is yet to be seen in the next set of polls; however, it is safe to say that both candidates put it all on the line during Tuesday’s debate, leaving behind a confounding trail of largely unintelligible rhetoric.

The Current President of the Free Country, Donald Trump Promotes Dangerous Militia Group by Proclaiming: ‘Proud Boys, Stand Back and Stand By’

After uttering one of the most dangerous statements, the debates raged on to absolute debauchery.

The debate moderator, Chris Wallace, started the debate on the topic of the impending Supreme Court nomination following the passing of the trailblazing icon, Ruth Bader Ginsburg. Trump began the debate slightly subdued, providing a fairly straightforward and easily digestible explanation for his action on replacing the late justice so swiftly, “We won the election… elections have consequences.” Trump laid out his logic that because he won the 2016 election, he has the right to choose the next Supreme Court justice as president. Biden opposed Trump’s reasoning on this topic, explaining that with Election Day so close, voting has already begun and the next Supreme Court pick should be appointed by whomever the people decide should be president on November 3rd.

Not much progress was made following these primary remarks as the conversation quickly devolved into a rambling healthcare argument. Biden brought up the 200,000 lives taken from the COVID pandemic under Trump’s watch, and Trump responded that had Biden been president, “2 million” would have died of the pandemic. As Wallace attempted to get the debate back on track, he was met with one of the first of Trump’s interruptions to which Wallace affirmed, “I am the moderator of this debate.” Trump responded to Wallace in the first of many trials of the moderator’s control, “I guess I’m debating you, not [Biden].”

It was not until Trump prodded about his opponent’s supposed “socialist” healthcare agenda that Biden began to find his footing. “I am the Democratic Party right now,” Biden declared, rejecting Trump’s claims that he is being coerced into more progressive ideologies from the left. This is one of the few truly presidential claims of the night and a defining moment for Biden’s debate performance. Trump responded that Biden had “ just lost the left” to which Biden turned to the viewer in an attempt to appeal to reason, a strategy Biden utilized several times throughout the debate, “Folks, do you have any idea what this clown is doing?” Both candidates found difficulty making their points without interruption resulting in a total breakdown of presidential decorum. “Will you shut up, man? This is so unpresidential,” Biden claimed before joking, “That was a really productive segment.” Unfortunately for Biden and the viewers at home, the productivity of Tuesday night’s debate remained devoid, as if irrelevant.

Moving on to the COVID-19 pandemic, a topic Biden appeared primed and ready to discuss, it took no time for the Democratic nominee to point out the shortcomings of Trump’s current administration’s handling of the coronavirus. Citing Trump’s previous claim that the virus “Is what it is,” Biden stated, “‘It is what it is’ because you are who you are. The president has no plan… What did he do? He panicked.” Unsurprisingly, Trump disagreed with Biden’s recounting of his supervision of the pandemic. “You wouldn’t have made ventilators,” Trump alleged, “You could’ve never done the job we did.” Biden then attempted to appeal to the pathos of American voters by posing the question of how many families lost loved ones due to the coronavirus, claiming the President failed them. Trump responded, making his position stark and simple, “[Biden] wants to shut this country down, I want to keep it open.”

The prestige of the presidential debate stage was once again lowered as Trump mocked Biden for his mask use and small rally sizes in response to the raging pandemic and continued into the proceeding topic of the economy. After touting the success of his economy, Trump claimed Biden “will shut it down again. He will destroy this country.” Biden responded that Trump will be the first president ever to leave office with less people in the country having jobs than when he entered office. Trump was quick to point out, “I’m the one who brought back football.” Although it was difficult to discern, the clear contrast on this issue appears to be that Trump believes people want things to be open again where Biden believes “people want to be safe.” This topic, in line with the past two, ended in personal digs. Biden demanded Trump release his tax returns before declaring him, “the worst president America ever had.” Trump then mocked Biden calling him a “number 2.” Resorting to bathroom humor is all but too appropriate for what CNN’s Dana Bash asserted was a “sh-tshow” of a debate.

Other memorable moments of the debate included Biden calling out Trump’s support of the alt-right, and Trump claiming Biden called Black Americans “super-predators”, a claim Biden rejected as false. Yet another absolute contrast was defined when Biden conceded that he believed that systematic racism exists in the United States, followed by Trump’s refusal to condemn white supremacy and endorsement of the Proud Boys, a far-right neo-fascist organization. Other notable remarks of the night include Biden calling Trump “Putin’s puppy,” Trump bringing up Biden’s son, Hunter’s drug addiction, and Trump’s inability to admit he will accept the results of the election.

As reviewed previously, many have cited this debate as the absolute worst in American history. Chris Wallace did his best to hold ground while Donald Trump focused his attention on annoying/interrupting his opponent rather than speaking to his country, and Joe Biden continued to directly speak to the people of the United States of America despite all disturbances.  While there are certainly a handful of infamous faux pas from past presidential debates, notably a sweaty Richard Nixon and a looming Trump during 2016’s debates, it is unquestionably true that new lows were struck this go-around. It will take some time to uncover how this debate impacted the state of the presidential race; however, it would be a great shock if any voters were swayed by the tactless circus many are characterizing Tuesday night’s debate as. From attacks on family to racist dog whistles, there has been much left to be desired for the upcoming debates. Whether Republican, Democrat, or undecided, I think all American voters stand united in the sentiment, “Do we really have to do two more of these?”

Wake Up America! After last night’s debate, we must all take action to vote with a conscience. It is no more about democrat vs republican, liberal vs conservative, black vs white. It has to be only about America/humanity vs division/politics.