‘To Dust’ Review: Snyder’s Comic Drama is a Macabre Yet Playful Rumination on Body, Soul, and Human Connection 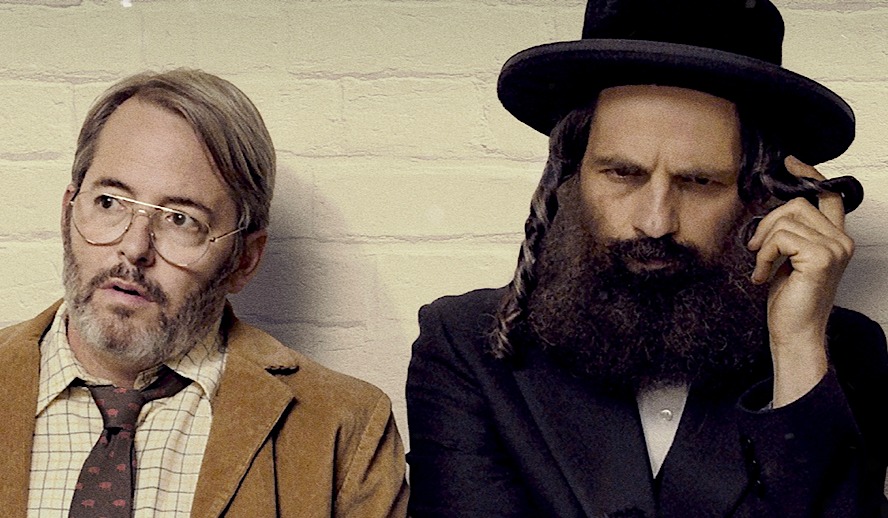 Shawn Snyder’s film To Dust digs directly into the soil of the heart with an absurdly playful melancholic rhythm, keeping us chuckling through the tears like some cathartic symphony. Co-written by Jason Begue, this incomparably nuanced narrative is a humanistic exploration of ancient traditions, modern science, and the search of serenity in the face of profound sorrow. Inspired by and written in loving memory of Shawn’s mother, Linda Snyder, it stars Matthew Broderick as a floundering biology professor and the endearing Geza Rohrig as a Hasidic widower, the film crackles with odd couple energy as science and faith collide.

The story follows the determined yet soft-spoken Shmuel (Geza Rohrig) as he takes an emotional reprieve from his traditional religious beliefs as a Hasidic Jew to mourn and seek closure after his beloved wife dies of cancer. Snyder wastes no time, as we are immediately introduced to the inevitably of death right in the opening scene. Fortunate for those frail of heart, we are instantly granted a moment of comic relief when an anguished Shmuel struggles to perform the traditional practice of ripping his garment after the death of a loved one. As we watch Schmuel fumbling with frustration, we can’t help but giggle a little. This ripped garment also serves as an important symbol throughout the narrative.

Tormented by stirringly lucid nightmares, he finds no solace in seeking answers from his Rabbi (Bern Cohen) and fellow religious devotees, causing him to pivot from his customs and resort to a rather absurdly unorthodox method of grieving. At one point we see him plant his face in the dirt mound where his wife was buried, leaving his two sons with his mother as he stays there overnight.

Shmuel’s subdued speech and mellow mannerisms throughout the film tend to sever the seriousness into digestible comedic bits which pervade throughout the plot. While the nature of the story is tonally somber by default, it is well countered by the integration of absurdly playful humor without seeming contrived. Synder manages to make us laugh out loud without shying from the astringent realness of human grief and the imminent decay of death. While other films with similar timbers leave us with an unnerving sense of dread (see: I’m Thinking of Ending Things), somehow here we are left instead in a state of peace and hopefulness.

‘To Dust’: Symbolism, Imagery, Dybbuk, and Rebirth Through Friendship

Having exhausted all former resources in his common practice, a determined Shmuel stops at nothing to appease his aching heart and turns to science. This leads him to a local community college, where he shares a delightfully comical moment with the lady at the front desk. In efforts to err on the side of discretion, he writes to her on a sticky note “I need a scientist”. Snyder doesn’t pretend to be oblivious to society’s reaction to the devoutly religious and tends to play with this trope throughout the film. By unmasking the unavoidable comic nature of a Hasidic Jew planted in uncommon social situations, he humanizes the stigmas we unconsciously place on the devoutly religious.

Eager to comprehend the fate of his wife’s biology, he seeks a scientific explanation from a hilariously disenchanted biology professor, who we are introduced to by his reference to human beings as “leaky buckets”. This marks the beginning of an unusual camaraderie between Shmuel and Albert (Broderick), when he inquires about the time it takes for a body to decay once it’s buried in the earth.

The contrasting conjoining of these two makes an absurdly odd pair, leading to a fortuitous friendship that helps us heal with them as the story progresses. After using a pig as an analogy for his wife, Albert reads through a textbook revealing the natural process of decomposition. Snyder inserts a graphic time-lapse of the pig decomposing, possibly active combat to the common customary censorship of death felt by Shmuel. Perhaps the forbidden exposure of this biological inevitably is what brought him to such lengths. While faith can undoubtedly be of service to us in our erratic lives, it can also repress the truth, probing us to tip-toe the realm of taboo. It’s rather innocuous in this film, as his efforts are to console his grieving, but not so much in other faith-related films such as Devil All The Time.

Shmuel takes the analogy of the pig a bit too literally, which leads to a series of absurd adventures between the unlikely pair to quench their existential uncertainties. Though it may have been unintentional, one can’t help but fall in love with the birth of this bizarre duo and the unmistakable comfort that is born from genuine human connection and empathy. Although their scientific escapades don’t turn out as planned, it’s clear that the friendship formed between the two generated new skin to mold over the emotional wound.

Throughout the film, Shmuel’s tattered garb remains untended, illustrating his ongoing restlessness and lack of closure around his wife’s death. In an effort to make sense of his distantly odd behavior and misconduct, his two sons suspect a dybbuk has possessed and taken residence in his toe. Though this subplot is inherently comical, the dark-colored hues and lighting of the film are reminiscent of the color palette featured in eerie films like Hereditary. Shmuel’s recurring nightmares flash vivid images of his wife’s toe, splitting at the nail and blossoming into some visceral fleshy flower, jarring viewers with a strangely beautiful and unnerving sensation. This grotesque symbol is prevalent throughout the film, taunting Shmuel with the idea that although dead, a part of his wife is still in distress.

Does the Soul Leave With The Body?

Shmuel’s nightmares are a result of his internal torment surfacing from the idea that the soul only finds rest when the body has been brought to dust and returned to the earth. Until then, while the “remains remain”, a piece of the soul also remains. This explains the deep feelings of frustration and anger expressed by Shmuel in his attempts to witness the decomposing of his wife. He wants to see the evidence that her soul is at rest. While these may have been partly foundational as a result of his beliefs, this question (both in the film and otherwise) remains unanswered.

If the body is a vehicle of energy, do the parts that make us “us” linger while it physically undergoes the biological process of decay? If what we call an ‘identity’ is a process of accumulated memory (or the “story” of who we are) then where do “we” begin and end? That which we call ‘self’ can very well be generated by the brain’s effort to organize patterns into linear structures. Therefore if we define ourselves by the consciousness that contains these memories, perhaps it simply “shuts down” once the heart no longer gives fuel to the brain. Or perhaps the energy that animates the body and signals our nervous system is symbiotic with the body itself.

Even if one finds themselves removed from the orthodox nature of strictly structured belief systems, it’s a common collective uncertainty shared by all. We can all take stabs at it, but the enigma is, at present, universally incomprehensible. This is what makes Shmuel’s agony and restlessness so potent. This cluster of conceptual chaos remains while we remain, but like Shmuel, we can find our own way of making peace with the nature of loss and all the mystery it entails.