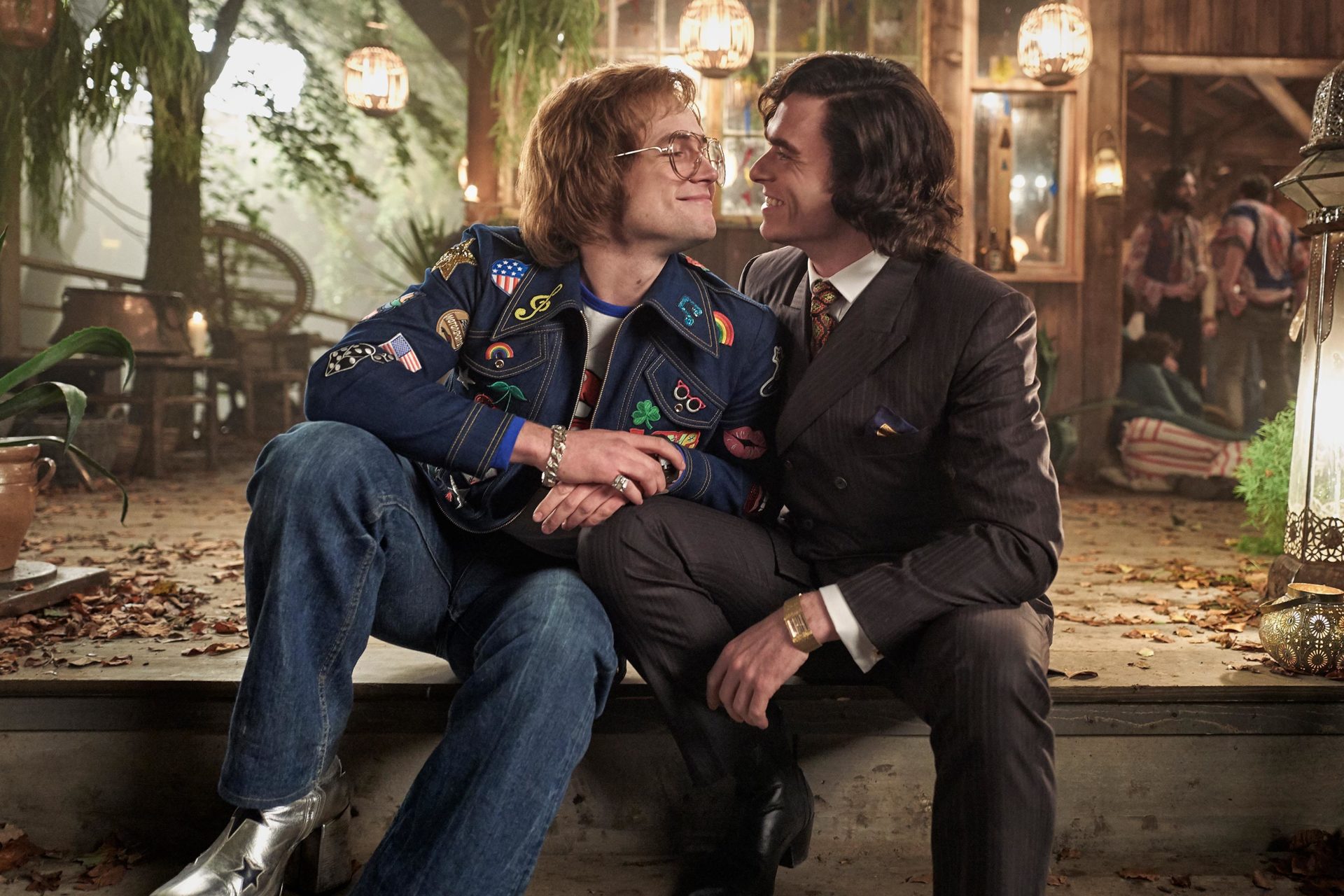 “This is a fantasy movie, more than anything,” declares Jamie Bell, who plays the brilliant Bernie Taupin, lyricist and long-time friend of Elton John in John’s biopic, Rocketman. And for a film about Elton John, why would it be anything else?

Directed by Dexter Fletcher (who had stepped up and finished directing Bohemian Rhapsody, after Bryan Singer was taken off the project), Rocketman takes a very different approach to the Rockstar Biopic genre. It foregoes the ‘by-the-book’ approach of laying out the events and trying to recreate performances as accurately as possible in favour of playing around with the story and music, adding its own flavour and giving it all a new lease of life. The film takes us on a ride along through Elton’s life narrated by Elton John (played by Taron Egerton) himself. It takes us through his journey from a shy Reginald Dwight plucking away at his piano that he seems to instinctively know how to play; to his rocket to his sparkly, sequined fame as Elton John; to his quick descent into addiction, depression and complete destruction of himself, his relationships and his sanity – all exacerbated by the scars of his gruelling childhood and his inability to live freely as a gay man.

As Jamie Bell so aptly summarised, what’s interesting about this film is that it blurs the lines between fantasy and reality. In the film, both Elton and his audience can literally be swept off their feet and float at his first US gig, so immersed in the music as they are. He may also take off like a rocket (wink) in the middle of a stadium concert because Elton had previously stated in interviews, “I honestly felt like I was about to explode and fire off into the sky like a rocket.” So that’s what Fletcher did. “We watch the story of Elton’s life, through Elton’s eyes, he’s recounting it through rehab – and he’s an addict and an unreliable narrator. He’s embellishing and imagining things in a more colourful way,” explains Egerton to BBC Radio 1. This choice to stray away from the reality and to make the dreaming literal is what sets this film apart from the others in its genre. 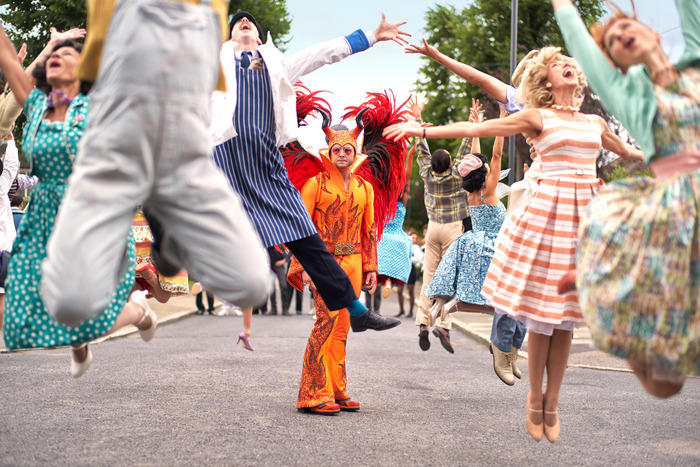 Also unlike many music biopics before it, Rocketman doesn’t use Elton and Bernie’s back catalogue as chronological events to be recreated, but moulds them into storytelling devices that help you understand Elton’s state of mind in that particular moment – “sorry seems to be the hardest word” he sings as he meets Bernie again after a period of separation; “blue jean baby, L.A. lady, seamstress for the band” we hear as he threads his way alone through crowds of people after losing Bernie to a pretty girl in their first Stateside party. It turns all the songs we know so well into something just a little different to what we’re used to hearing, giving them fresh meaning and context along the way.

In 50+ years friendship, Elton and Bernie have never had an argument

One of the major themes in the film is the celebration of Elton and Bernie’s enduring friendship and musical partnership. The film reveals that in the 50+ years of their friendship, they have never had an argument. That kind of bond and alliance is difficult to re-enact and yet, Egerton and Bell have done spectacularly. They portray the comfort and respect of their relationship in an understated, easy manner which we can see in the concerned gaze of Bernie while Elton continues his “campaign to kill himself”, and in the way that Elton holds Bernie hand apologizing immediately after frustratedly yelling at him before a show – and then in Bernie’s quick, simple, unbothered, “I know.” Egerton in particular, of course, deserves high praise for his portrayal, doing justice not only to Elton’s layered life and persona with his range in acting (despite Elton John, himself, being involved with the film as executive producer, the film does not try to pretend like Elton wasn’t far from perfect), but also his singing – in which he somehow manages to sound enough like Elton that we know it’s Elton, but keeps it authentic and natural without falling into the trap of doing an impression.

In Rocketmen, Egerton and Madden’s chemistry is palpable from the get-go

We must also talk about Richard Madden in his embodiment of the slick and sexy, cruel and calculative lover/manager, John Reid. He expertly switches from the burning, lusting gaze in the beginning of their relationship to the icy, unfeeling, steely stare when that relationship inevitably breaks down, delivering harsh verbal punches with cold vitriol (a particularly brutally uttered “I don’t care” sent shivers down my spine). Egerton and Madden’s chemistry is palpable from the get-go, laying the raw lust bare for the audience to see, in contrast to the caution and secrecy that they have to put their relationship through lest Elton’s homosexuality leak to the media and ruin his career.

Rocketman is a unique take on a story of love

In a lot of ways, Rocketman is not a story unheard of in the rock star scene – the tale of a shy but talented musician, with a troubled childhood, breaking into the music scene, struggling with their sexuality, getting into abusive relationships, and spiralling into a hole of drugs, sex and alcohol. Yet, you’ll find that Rocketman will surprise you with its unique take on a story of love, what it means, and the self-doubt and destruction that can result from being improperly loved. It is also a deeply optimistic film with a strong message … in a society that increasingly places paramount value on financial success, it is important for us to be able to hear “I wish I was someone else” coming from the mouth of a rock star at the apex of his fame – you can have all the success and riches in the world, but it cannot replace the presence of love and kindness in your life. However, the film shows, by leaning on the compassion and warmth of people, by allowing yourself to admit to your problems and ask for help, you can bring yourself slowly out of the hole. It will take a lot of work. But it can be done. After all, that’s how Elton John – despite all he tried to do to himself during those difficult years – is able to sit at the Cannes premiere of his biopic, having been sober for almost 30 years, with a loving husband and children back at home, being able to say “I am proud of my life” and trying to stop others making the same mistakes he did. All in all, from the narrative to the smooth cinematography, the film feels like an embodiment of Elton, himself, with his legendary showmanship and the dreamlike quality of his performances leaking into the portrayal of his life without sugar-coating the dark and ugly parts. What more could you want from an Elton biopic?

To end, here is a duet of Taron and Elton beautifully performing ‘Tiny Dancer’ together for the Elton John AIDS Foundation.