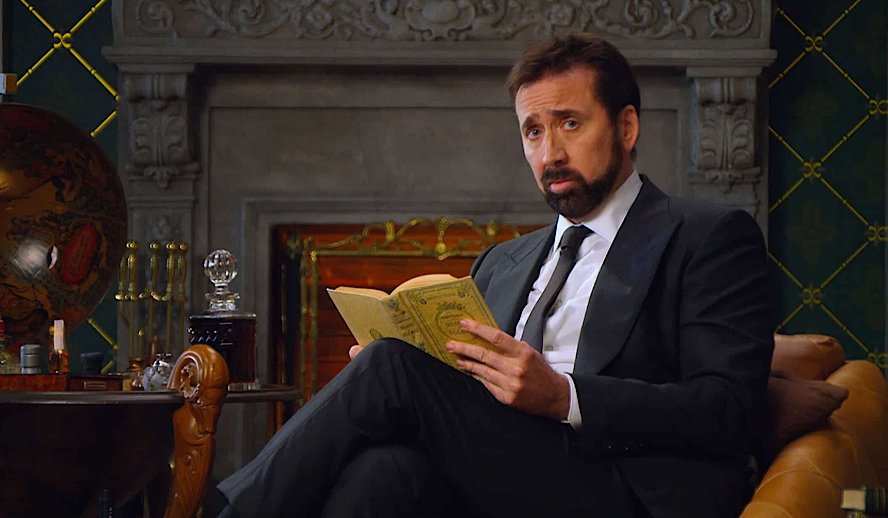 Can you truly disappoint with Nicolas Cage? His mystifying ardence is a perfect fit to host a show about the boundless versatility of swear words. As educational as it is entertaining, Netflix’s ‘The History of Swear Words’ is full of laughs and fun. The pacing and rhythm move at a steady pace that keeps the viewer engaged from beginning to end and delivers exponentially on the great content Netflix has been pumping out for years. The series was a recipe for success from the start, with the original concept and universally beloved host, but then Netflix salted and peppered each episode with some of the funniest comedians, impressive historians, and real-life swear word geniuses.

As engrossing as each thorough history lesson on every swear word that can be imagined, what really makes this series stand out is its visually aesthetic set design – especially Nick Cage’s slumber that he casually relaxes in as he informs his captivated audience on curse word history – and the impeccable color coordination. The show is as pleasing to the eye as is the commentary from the powerful and informative performances is to the ear, making it sensationally stimulating throughout.

Even the marketing of the show was hilarious; when introducing Nicolas Cage as the host in the trailer, Netflix joked that it was because “Samuel L. Jackson wasn’t available.” It’s clear that Netflix brought their powerhouse resources of incredibly talented directors, editors, and animators, but the novel artistry in the show can be traced to their collaborators. The intrinsic humor in it that gives the show its tone and flavor can be rooted back to the creators, who have some of the most magnificent resumes in showbusiness.

Produced by B-17 Entertainment (‘Craftopia’, ‘Ruth and Ruby’s Ultimate Sleepover’, ‘Post Malone’s Celebrity World Pong League’) and the Adam Mckay and Will Ferrell brainchild, Funny or Die (‘Between Two Ferns with Zach Galifinakis’, ‘Drunk History’, ‘Billy on the Street’) Netflix has championed star powered comedic docuseries in their streaming lineup for quite some time. The laughs bring an inherent joy to all of Netflix’s content, and it has been a fitting contribution to their branding as not only the cool, top kingpin in the streaming game, but undeniably the modern comedy powerhouse. ‘History of Swear Words’ is only adding on to that, and the splendid outcome of the series only signifies a formula that Netflix will continue to use for years to come.

The Star Power and Production Talent That Makes This Docuseries Great

Netflix has attracted some big names in recent years and has propelled their artistic endeavors to such a level of endowment, that they now are regular Oscar contenders. They’ve also made a huge investment in comedians, some who’ve gotten specials through Netflix are Dave Chappelle, London Hughes, Bert Kreischer, Ali Wong, Pete Davidson, and Marc Maron. They’ve transferred these stars into diverse projects they wouldn’t have imagined before ‘Drunk History’, and it’s incredible to watch them shine and brighten an educational genre that’s been preconceived to be boring for most of TV history.

This growth shows exponentially in ‘History of Swear Words’ where it seems they’re getting comfortable with their style, and know the formula like the back of their hand. This kind of creative control and comfortability seems to be enhancing the quality of their material, along with their investments – and well known collaborative autonomy – in comedians and auteurs, which are spearheading and perpetuating the streaming service amongst the large wave of competition coming from new streaming services such as Disney+, Hulu, Amazon Prime Video, and HBO Max.

With some of the brightest comedic minds accompanying Nicolas Cage, from a roster consisting of Jim Jefferies, Sarah Silverman, and Nikki Glasser, the show is nonstop hilarity, with all the people involved having clear fun with each swear word, and providing their insight on how that word impacted them. The fun the performers have with the swear words, and the comical real-life experiences they share energize the show, and build a connection with the viewer that almost feels like camaraderie, even though new information flows nonstop. Netflix never disappoints on keenly picking the best talent.

‘History of Swear Words’ – What Is Each Episode Like?

The series covers a wide range of topics centered around swear words, from what celebrities have sworn the most, the multiple different uses of each swear word, and of course, the history of them. Each episode deconstructs a new swear word and features historical context, uses in media, and modern derivations of that specific word in the social zeitgeist. The animators, Tyler Shanklin, Joe Kennedy, Jerad Riojas, deserve to be applauded, as their sleek and intricately detailed inclusions bring the series to life, and illustrates information that would be dull to listen to otherwise.

There’s a diverse lineup of talent involved also, giving multiple different perspectives on each swear word, and how they vary from culture to culture, and with everyone’s personal life experience. Headlining the show in between all the talented individuals giving their takes or knowledge on the swear words, Nicolas Cage employs his talent for lyrical wordsmithery and anchors this show to be high quality, and engrossing. The series is strikingly gripping, and an easy-to-binge show overall.

Netflix is standing upon the shoulders that Derek Waters pioneered with his original and incredibly acclaimed show ‘Drunk History’. In just the past few years, Netflix has utilized a template that varies from classical history shows, and in the past few years they’ve released several great shows following a similar formula; from’ ‘Sex Explained,’ ‘John Leguizamo’s Latin History for Morons,’ ‘The Movies That Made Us,’ ‘High Score,’ ‘The Holiday Movies That Made Us,’ the list goes on. It’s a clear model for success, as these shows have consistently lingered in their top ten trending lists, and have kept those positions for weeks on end.

Netflix is certain to keep milking the proven method as long as subscribers keep swarming each new series they release. As the numbers will show, anything reminiscent of shows like ‘History of Swear Words’ will magnetize people, and they’ll enthusiastically clamor up the next new series. Though this show can trip up on its own momentum at times, and even feature some moments where the wheels stop spinning, it’s overall a great show. Not only is it entertaining, but it’s educational, so the viewer is guaranteed to only gain from watching the series. Fair warning, once you start, you’ll probably find it hard to stop.