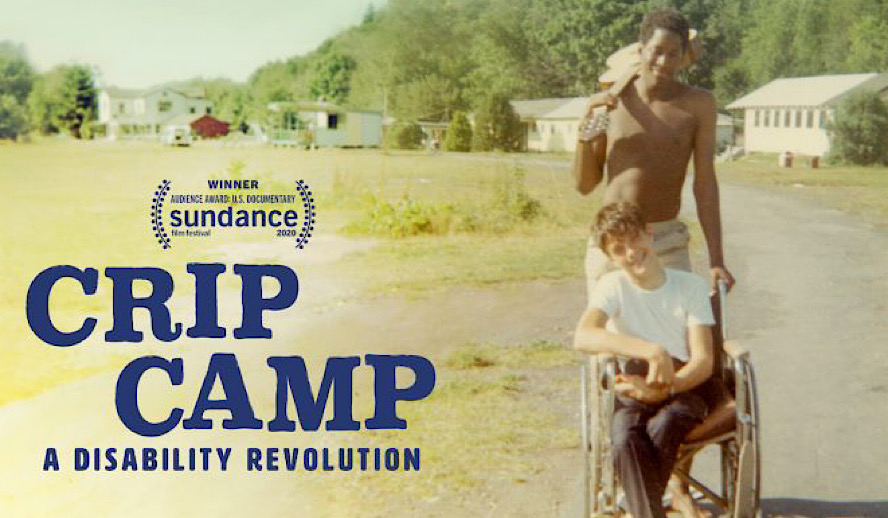 Crip Camp is one of Netflix’s most powerful originals to date. Directed by Nicole Newnham and James “Jim” LeBrecht under Barack and Michelle Obama’s production company Higher Ground, the documentary chronicles the journey of a group of kids that found themselves at the heart of the Disability Rights Movement at a time when the question of implementing ramps was not a question of whether or not the disabled should be given the rights and accessibility they deserve, but a question of how much money it would cost.

The documentary contains simple delights, such as witnessing the evolution of clothes, hairstyles, and cars on the street as the decades pass, but at its core is the story of a group of people that simply wanted the world to understand one simple truth–that they were not merely wheelchairs, but human beings. These youths came together at a summer camp dedicated to people with disabilities called Camp Jened.

“It was so funky. But it was a utopia. When we were there, there was no outside world,” reminisced Denise Jacobson, fondly thinking back to her stay during the early ‘70s at Camp Jened. Tucked away somewhere in the Catskills, it was heavily influenced by the hippie counterculture of the time. As Jim LeBrecht put it, “Somebody said, ‘You’ll probably smoke dope with the counselors.’ And I’m like, ‘Sign me up!’”

However, it was more than a hippie retreat. At best, the teenagers who gathered there had been accustomed to being treated like second-class citizens their entire lives– at worst, they would have been institutionalized in one of the grotesquely inhumane asylums that were still commonplace at the time. Jim LeBrecht recalled how a Jenedian who had been interned at Willowbrook, one such institution, would shovel as much food as he could fit into his mouth at every meal to the point of vomiting, which he later realized was a consequence of him being habitually starved at Willowbrook.

At Jened, it was different. They all had to participate in every activity. Together, they played sports, swam in the pool, listened to music, had deep conversations, experimented with romance, and contracted crabs, among other typical summer camp activities. During discussions, they were all given the opportunity to speak, and in turn, were all listened to with sincere attention.

In other words, they were treated like the human beings that they were. For the first time in their lives, they were not only seen and heard by those around them but felt confident in their own skin. They asked questions of their own lives that revealed their unjust treatment at the hands of society. Why couldn’t we ride the bus? Why couldn’t we have a right to privacy? Why weren’t we allowed to do the same things as everyone else?

By simply being enabled to have honest discussions with those who understood, the youths were emboldened to fight for their rights as nobody had before, and thus Camp Jened had incubated what would become the Disability Rights Movement.

‘Crip Camp’ – Pioneers of a Movement

Though the playful stories of their youths and the humorous camp anecdotes are both charming and heartwarming to watch, there is an underlying sense that it’s sad to be celebrating that which they should always have had access to. As Judy Heumann would lament later in life, “If I have to feel thankful about an accessible bathroom, when am I ever gonna be equal in the community?”

We’re first introduced to Judy Heumann as she leads a meeting about what the campers want to cook while the chef takes his day off. It’s a foretelling microcosm of her leadership and public speaking abilities, and eventually, she would be one of the leading figures of the Disability Rights Movement.

As activist Corbett O’Toole would humorously recall, “We were more scared of disappointing Judy Heumann than we ever were of the FBI or the police department arresting us.”

Of course, it all started at Jened, but in terms of the “outside world,” she got her first true start in activism after being denied her New York teaching license on the grounds that, as a wheelchair user, she was a fire hazard. This led to Heumann v. Board of Education of the City of New York, which she settled out of court. She became the first wheelchair user to teach in New York City.

The film then follows Heumann and the organization she would found with some fellow Jenedians, Disabled in Action. At first, the only proposed legislature that would yield anything to the disabled was Section 504 of the Rehabilitation Act of 1973, which, even when finally signed into law, was not properly enforced.

The Occupation: A Portrait of Intersectionality

Joseph A. Califano Jr., then-Secretary of the United States Department of Housing, Education, and Welfare (HEW), refused to sign regulations that would further enforce Section 504. In response, Judy organized a protest in San Francisco which, according to firsthand accounts, somewhat spontaneously evolved into an occupation of the federal building that housed the HEW.

The occupation lasted for weeks. They had the support of the mayor, local government, various labor unions, and Glide Memorial Church, but it was even broader than that. Disabled activist Brad Lomax, who was present at the occupation, was also a member of the Black Panthers. He reached out to them and they ensured that the protestors were well-fed for the entire duration of the occupation, at no cost to the protestors themselves.

The local LGBT community also reached out in support, such as the owner of a prominent East Bay lesbian bar providing hair-washing services to the weary, unbathed protestors.

The film is inspiring not only for its portrayal of the passionate individuals that pioneered a movement but for reminding us that the fight for rights and equality should not be exclusive to this group or that. It’s an ongoing struggle to elevate society in a way that nobody is left behind.

Crip Camp is not only chock-full of important political history but humor and heartfelt moments. It achieves this by telling the stories of its subjects without judgment or prejudice. It presents people who have disabilities with honesty and humanity, and their struggle is to merely be recognized for who they are and be given basic access to the world in which we all live.

As sad as it is, prejudice and misconceptions about the disabled are still prevalent in our society, and activism is an ongoing struggle that continues today. Equally as important as legislation or accessibility is an increased social awareness of people that many of us tend to overlook.

Crip Camp is an impactful documentary because it doesn’t just talk about the disabled, but engages in actual conversation with them. The voices of people with disabilities often go unheard, which is why I hope this film marks a greater push towards honest representation and frank social dialogue.