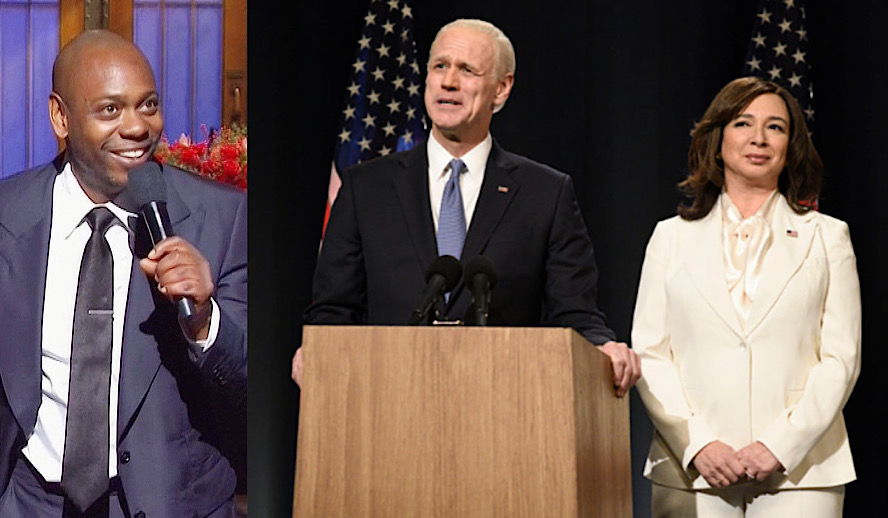 Social media went into a frenzy, and millions anticipated with excitement Saturday Night Live’s post-election show, with the Foo Fighters as the musical guest, and Dave Chappelle hosting. The very day Joe Biden was announced as the next President of the United States, SNL aired the last episode of its historic 6 show run. The cold open started with CNN’s announcement of Joe Biden’s presidential-elect win, with Beck Bennett playing Wolf Blitzer and Alex Moffat playing John King, they playfully celebrated the recent news. Jim Carrey then walks out on stage as Joe Biden, and comes out with his usual solid jokes “We just kept inching closer and closer, it was like having sex with sting!” and then even paying homage to his famous character, Ace Ventura.

Maya Rudolph followed him as Vice President Kamala Harris and gave her speech that resembled her actual one made earlier in the day. Rudolph kept the crowd laughing the whole time, with her always delivering a phenomenal performance. What stands out impressively is how fast the SNL writers were able to put together such a high-quality sketch in a matter of hours, around the dress rehearsal and the actual show. To round out the three most ceremonious portrayals of the real events of the day, Alec Baldwin reprised his impersonation of President Donald Trump, singing a farewell “I’m a Macho Man” theme song on the piano. The cold open was strong, hysterical, and just what people needed to end such an emotional day.

Dave Chappelle is a kingpin of comedy; the second-youngest recipient of the honorary Mark Twain Prize for American Humor (behind Tina Fey) and a legend who’s broken barriers and trail blazed through political correctness by valuing the quality of jokes over their offensiveness. It was only right for him to return to Saturday Night Live’s stage as host four years after the last election week when Donald Trump surprisingly beat Hillary Clinton, now to see Trump’s supremacy fade and dwindle. Except this show wasn’t anything like the show four years ago. For one, many people had to wait until 12:30 (an hour late) for the episode to start, due to NBC unreasonably airing local news channels, many of which apologized for being on the air instead of SNL. But a bigger reason is the way Dave presented himself, his famous cigarette in hand and daring demeanor, and how he did his stand-up routine.

Rather than dropping a monologue full of setups and punchlines, or interactions with the audience, Dave orated a beautiful story about his great grandfather, whom he had never met, and how he would feel seeing Dave today… with a surprising twist. Although Chappelle’s monologue was full of heart, he still did spend way more time than any host in SNL’s history on his monologue, finally smoothing into his classic stand-up routine and telling jokes that left many in the audience flabbergasted. During the monologue, he took aim at hot topics, like mass-shootings, coronavirus, and women’s pay rate. One of his punchlines was “that’s why women get paid half” and saying “thank God for Corona, someone had to lock up these murderous whites!” After receiving unfavorable responses from some audience members over his more non-PC cutthroat jokes, even commenting at one point “Damn Lorne, I thought this was a comedy show, not a woke meeting.” Chappelle, as always, performed a unique, jaw-dropping opening monologue, and was heartfelt and innovative just as much as it was hilarious.

In a fashion that was reminiscent of Chappelle’s Show, Dave Chappelle introduced a brief description of the first sketch of the show, saying it was spawned from the acknowledgment of many Black people losing their jobs during the pandemic, then prompted the sketch to start. The show began with a powerful sketch that had themes of cancel culture and featured most of the top-level talent from the cold open. It’s an incredibly funny, clever spin on the Aunt Jemima decision, Uncle Ben, and more. Putting controversial issues like cancel culture, racism, and American society under a humorous spotlight is a Chappelle specialty, and the content of the show unquestionably echoed that.

The following sketches had more content that shaped around the cast’s talents. There’s a Mario callback sketch, titled Mario Memories, that follows a similar style to most of their parody documentary videos. The next one features Beck Bennett and Ego Nwodim, as they banter back and forth about their relationship and the problems that consistently heighten through the entire sketch. Weekend Update killed as always, with Colin Jost and Michael Che hosting one of the most beloved segments of the show, with Kate McKinnon reprising her side-splitting impression of Rudy Giuliani. Two mock news segments were after Weekend Update, where two people’s, played by Kenan Thompson and Kate McKinnon, romantic interest in each other diverts their attention from a natural disaster, and Chappelle and Nwodim play anchors that cover the unique but familiar “footage” of Donald Trump leaving the White House.

And, as expected, the Foo Fighters performed terrifically both times. The show was slightly unconventionally structured, but it landed successfully. Visibly absent was Aidy Bryant, who’s currently filming Shrill, and Cecily Strong, who’s filming an untitled show for AppleTV+. They are still credited as cast members of the show, with Aidy even appearing on a weekend update segment, but it’s unknown if they will appear at all for Season 46. Their seven-year contracts are up, and it’s up to them and the SNL producers if they want to return. SNL has heralded new talent this past season, Andrew Dismukes, Lauren Holt, and Punkie Johnson. The cast that fans have known and loved throughout the 2010s appears to be fading, and a new one is re-forming.

SNL and Dave Chappelle are equal legends, equally standing as inspiring emblems for comedians, and artists all around. They’ve both seen so much, covered so much content, and have pushed the envelope for comedy, even redefined it. With a year that’s been unlike any other throughout human history, comedy has become more important now than ever to instill a light in people, a light that many haven’t had all year. Season 46 of SNL has demonstrated their ongoing importance in society, their reflection of American culture, and maintaining the integrity of humor, pulling it to the forefront of American society, and making the world not seem so grim. They did a wonderful job this season, with their extraordinarily talented cast and crew, and steadily have proved why they’ve been on the air since 1975. Dave Chappelle is more than worthy of leading the big night where all that history, all that time and effort, and all that talent culminates and hosting a comedy show for one of the biggest nights in American history.