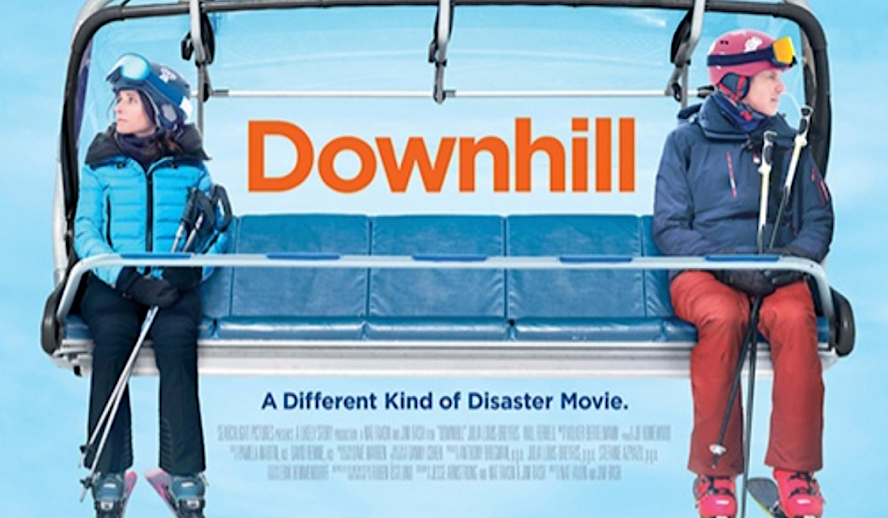 When I’m browsing through movies, I always take a look at the cast. While there are plenty of excellent independent films without famous actors, it’s always a plus when a movie has recognizable actors that you like. The other night I was looking for a comedy, and I came across Downhill. I saw Will Ferrell and Julia Louis-Dreyfuss in the cast, and I clicked immediately. What better duo than two comedic legends to make me laugh? I was also interested to see them work together for the first time.

The result was not exactly what I expected. There were certainly funny moments, but Downhill also has many serious elements that make you think. Based on a 2014 Swedish film called Force Majeure, the dark comedy follows a family of four on a vacation in the Alps. Peter (Will Ferrell) is grieving his father and wants a quiet getaway to take his mind off of things. Rather than a relaxing experience, the trip turns out more like the movie’s title.

‘Downhill’ has a somber undertone

You would think the plot would follow Peter’s personal journey of accepting his father’s death, but it’s really more about his relationship with his wife Billie (Julia Louis-Dreyfuss). The more the story goes on, the more their relationship deteriorates. They spend most of the film bickering and enjoying the time they spend apart more than when they’re together. The whole time, I was wondering if they were even right for each other in the first place. They seemed like the type of couple that was only staying together for their kids.

The tension started when an avalanche almost hit the family while they were ordering breakfast. Instead of trying to save his family, Peter grabbed his phone and ran away. This event triggers the negative interactions that Billie and Peter share for the rest of the film. Peter is the classic emotionally lost male character, who will find any excuse to be distant and not express his true feelings. Billie waits for him to explain his behavior, but by the time he does, it’s too late. It’s a tragic love story, and it’s a lesson in how important it is for couples to communicate with each other.

The movie doesn’t take either side

New York Times co-chief film critic A.O. Scott said “The film isn’t sure whether to take Pete’s side or Billie’s, or if it should really take a side at all, and so it hovers like an insincere friend, nodding and chuckling and refusing to judge.” This was a perfect way to put it, as I found myself undecided about who was more in the wrong. While Peter obviously shouldn’t have left his family to get crushed by an avalanche, Billie also didn’t go about it in the healthiest way. Instead of having a heart to heart after the incident, she silently seethed, letting the tension hang in the air.

Peter also could have explained himself sooner, which is why I think there is blame to assign on both sides. Nothing good comes out of unresolved issues and putting off important conversations. I think it was good for the film to stay unbiased, letting the viewer interpret the situation for themselves. Many conflicts in life are due to faults from both parties, even if one of them won’t admit it. This one was no exception.

Ferrell turned in a reserved performance that perfectly fits the personality of his character. He doesn’t stand out as he did in Elf or Talladega Nights: The Ballad of Ricky Bobby, but that’s the point. He was playing a middle-aged man still finding himself, too lost and confused to be emotionally available for his family. He had his moments of trying to come out of his shell, but it usually came off as goofy and ingenuine. It’s one of the most melancholic characters I’ve seen him play.

Louis-Dreyfuss was also convincing as the angry wife. She shined the most in a dinner scene with Peter’s friends, in which she was emotionally recounting the avalanche ordeal. She seemed like a woman legitimately heartbroken that her husband was a coward willing to let his family die. Who wouldn’t be angry in her position? Even worse, he wouldn’t be honest about the situation. I couldn’t help but sympathize as she screamed at him.

The supporting cast did well with what they had to work with, as they were mostly simple characters. Miranda Otto played a sexually charged hostess who lives on the edge, while Zach Woods and Zoe Chao played trendy young people obsessed with social media. The kids, played by Julian Grey and Ammon Ford, were largely there to support their mother’s discontent with Peter. Kristopher Hivju’s brief appearance was a nice surprise, as it was the first time I’ve seen him on screen since he was Tormund in Game of Thrones.

Downhill won’t immediately “wow” you, but it has plenty of aspects that will stick with you. If anything, it affirms the importance of communication in a relationship. Peter and Billie’s marriage is a showcase of how not to act with your significant other. The dysfunction is humorous, but also sad. When a couple has kids that look up to them, the way they interact with each other will in turn affect how the kids interact with people when they grow up. That’s why personality traits “run in the family,” and sometimes those traits can be toxic ones.

The film ends on a cliffhanger that warrants further conversation and interpretation. The viewer really has no idea how their relationship ends up. Do they makeup, or predictably separate? The last scene is another unexpected event, but this time we don’t get to see the fallout of it. With the film only lasting 85 minutes, it didn’t have time to properly complete a relationship arc. It’s up to the audience to reflect on what might have happened after the screen went black.