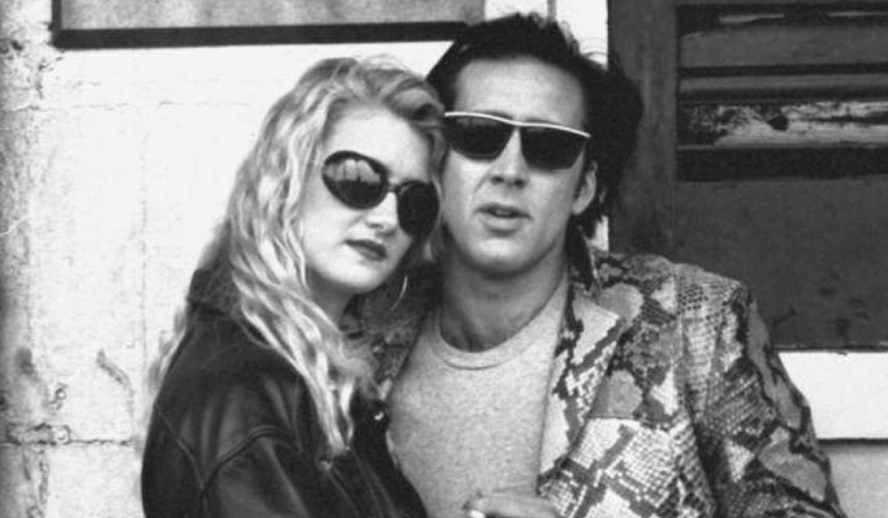 Chased down by assassins, lovebirds Sailor (Nicolas Cage) and Lula (Laura Dern) take to the road to escape their demons. Wild At Heart finds David Lynch infusing a fairly standard road-trip premise with his distinctly odd sensibilities. The film is filled with steamy romance, violence, hints of lurking evil, and a tone that is recognisably otherworldly yet perhaps more purely fun than the director’s classics.

Though Wild At Heart offers the typical madness you would expect from David Lynch, this time around it is presented through a lens that feels more accessible than the films he is best known for (Blue Velvet, Mulholland Drive, Eraserhead). The usual hypnotising drawn-out sequences are present yet they are infused with a sense of silliness and enjoyment- Wild At Heart’s concert scene evokes a similar moment in Blue Velvet but is far more playful and ludicrous. At its heart, the film is also a romance story, and it leans on this forcefully and erotically- it’s intense, often graphic sexuality is key to its identity. The dialogue often provokes simultaneous shock and laughter. In every moment Wild At Heart is brash (it has one of the most violently contentious openings I have seen). The lighting is bright and colourful, just like Sailor’s ridiculous snakeskin jacket. This looseness was mainly enjoyable because it was nice to see Lynch’s artful, abstract style applied to (slightly) simpler and sillier content- indeed part of Wild At Heart’s appeal is that it is unafraid to be a fun ride whilst still engaging in dark themes.

A Wonderfully Dark Sense Of Humour

In some ways this even a comedy- the dark humour that underlies much of Lynch’s aesthetic is brought to the forefront. The characters are ridiculously heightened- the two protagonists, Sailor and Lula, interact in a manner that is consistently funny and otherworldly. Both actors perform with a total lack of restraint, particularly Cage, whose unhinged madness lightens the mood even when the content becomes incredibly dark. Lula’s mother is also a consistently ridiculous character despite being the main antagonist- the scene in which she breaks down and cakes herself in red lipstick is hilariously odd. Her relationship with Jonnie (Harry Dean Stanton, excellent as ever) is equally comical.

Some of the evil characters are delightful in their sheer dedication to wrongdoing. The assassin hired by Lula’s mother simply loves the idea of murder and is both funny and threatening for this reason. Willem Dafoe’s Bobby is similarly devilish. Though its content is dark, much of Wild At Heart play comedically, which works mostly in its favour.

Still, Wild At Heart is equally notable for boasting a seriously sinister underlying oddity that intensifies throughout the runtime. The film contains creepy visual connections to The Wizard Of Oz and is unafraid to indulge in the surreal and abstract in other ways. The notion of evil lurking beneath the surface of normalcy is as present here as it is in Blue Velvet. The sense of fun is often suddenly cut out by disturbing scenes of murder. This rising discomfort comes to a head as Bobby, the culmination of the film’s increasing showcase of evil, is introduced. He offers a believable yet wacky sense of devilry and bolsters the film’s climax (Also, on the strength of this performance he should really play the Joker). Though it has a simple premise and a more welcoming tone than what its director is usually known for, Wild At Heart still offers the oddity Lynch fans expect and crave.

On the other hand, given that the film is so forceful some of its elements are hit and miss. Nicolas Cage is entertaining as the central “wild at heart” lead but his performance is also irritating and overly unrealistic at times. He smashes, dances, and sings his way through the story to mixed effect. Though to a lesser extent, Laura Dern also gives an uncharacteristically in-your-face performance which although impressive suffers from similar faults.

A Cocktail Of Many, Many Flavours

For the most part, Wild At Heart’s blend of comedy, fun, and darkness adds to its charm. This also holds it back in relation to Lynch’s more self-contained works. The fun road trip B-movie sometimes clashes with the sinister mystery. There are so many different feelings and tones vying for a position that the film threatens to overwhelm as its surreal, musical-influenced conclusion unfolds. There is also a subtext of sexual violence that does not hit in the way it needs to and feels gratuitous, awkward, and far inferior to its more effective presentation in Blue Velvet.

Though Wild At Heart’s hypnotic lack of clarity is mostly appealing, it doesn’t always feel earned and often acts as more of a forced Lynch-ism. As the story progresses, the initial premise gets obscured. Individual moments increasingly overtake a sense of narrative continuity. A random car-crash adds to the sense of lurking threat but disrupts the narrative flow. The gang led dinner table scene contributes to a sense of unease, yet it is difficult to place among the themes and narrative of the story. Rather than reflecting the content as it does in Blue Velvet and Eraserhead, the sense of confusion appears to be there simply because it is a feeling David Lynch enjoys. The victory of smaller moments over a general sense of structure works both for and against Wild At Heart. Strangely, this is an aspect the film shares with recent release Tenet, which similarly saw an auteur (Christopher Nolan)’s indulgences slightly overwhelm the story he was telling. I still prefer too much influence over too little, but Lynch is at his best when his urges to confound are disguised behind a self-sustained story.

Overall, Wild At Heart is still an underrated entry in David Lynch’s filmography. It finds him at his most fun, but also his messiest. It is both entertaining, funny, and sinister. It could do with a little more restraint, but then again its imperfections add to its charm. If you like David Lynch but have avoided this thus far I would certainly recommend it, as would I to those who feel intrigued but perhaps slightly alienated by his most obscure work. The film still contains significant moments of madness- however, it seems to me to be the entry in Lynch’s filmography that is most concerned with being entertaining above all else. For this reason, it is noteworthy despite its flaws.