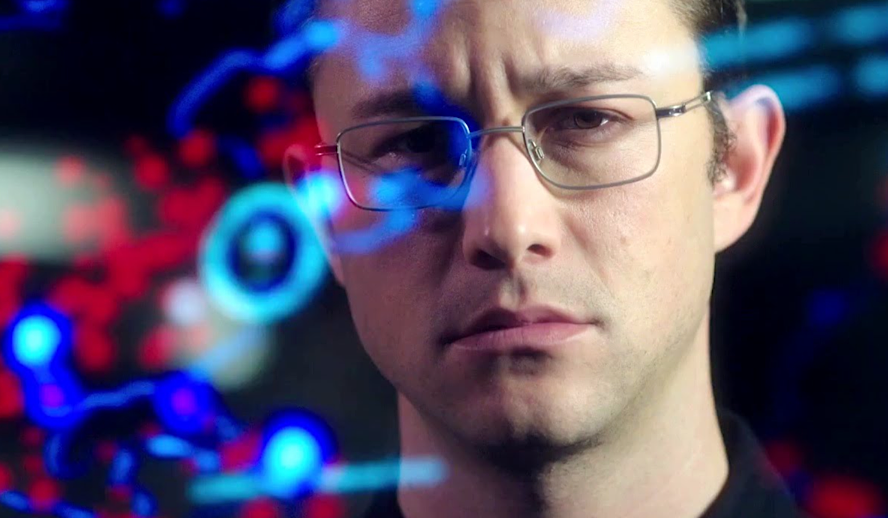 Sometimes, biopic movies are less about the actual person they’re based on, and more about what that person represents. On its face, Snowden (2016) is about American whistleblower Edward Snowden (Joseph Gordon-Levitt). However, it’s really about the world learning how governments spy on it. Based on a true story, this film is a detailed account of Snowden’s personal journey from the U.S. Army to the CIA, then to the NSA, then to being a whistleblower.

Watching him go from idolizing the American government to detesting it was saddening on one hand, but it made sense. Who wouldn’t be disgusted with a government that looks through peoples’ laptop cameras without them knowing? Snowden’s disappointed and downright frightened facial expressions when learning about the NSA’s spying tactics represent every common person’s reaction to the subject matter.

One quote continues to stick out to me when I think about this movie: “terrorism is the excuse.” Snowden pointed this out when he was talking about the government’s justification for spying on its citizens. They act like it’s about security against terrorists, which is an easy concept to sell in the post-9/11 world. In reality, though, you don’t need to stalk and gather data on every single person living on the planet to fight terrorism. It’s really about power and money, two familiar concepts that seem to be the driving force behind many nefarious things. The film dives deeper into the government’s secrecy and misleading actions, but it’s certainly an eye-opener for viewers who weren’t already aware of this harsh reality. Even if you already knew, it’s still interesting to see how Snowden learned about this information, and then shared it with the world.

Whenever the movie depicts Snowden spilling his knowledge to journalists in his Hong Kong hotel room, you can feel his stress. This is in large part due to Gordon-Levitt’s stellar performance, but it’s also because of the weight of the situation. This was a man who was putting his life on the line for the greater good of the public. The American government was after him, painting him as a treasonist. The entire time, I was thinking “how could this man deal with all of this and stay sane?” In the end, one of the journalists called him an “astonishing person,” and I’m inclined to agree.

However, the hotel room scenes aren’t the only stressful ones. There are plenty of arguments with his girlfriend Lindsay (Shailene Woodley), where she pleads with him to put his mental health over his job. He’s so committed that he can’t help himself, jeopardizing their relationship and safety. You have to feel for the guy because while he clearly cares about Lindsay, he can’t shake his moral obligation to inform the public. The worst part is that he’s never allowed to tell her work details, which also makes you sympathetic towards her. Imagine going through relationship problems because of your partner’s stressful job demanding too much of them, but they’re not even allowed to tell you what’s so stressful about it. That doesn’t sound like a comforting situation.

What’s most interesting about Snowden as an individual is how his political beliefs completely reversed once he became more informed. In the beginning, he was a passionate conservative who idolized the American government. When he first meets Lindsay, he gives the all-too-familiar speech about how the liberal media twists the news, and how it’s immoral to question the government. However, once he actually starts working for the government and realizes how unglamorous it really is, he becomes an Obama supporter. Admittedly, he remarked that “things didn’t get better” under Obama, which is true from an online privacy standpoint. Still, it’s an intriguing ideological progression that makes you think about how dangerous it is to blindly support the government.

Perhaps this was director Oliver Stone’s way of ridiculing nationalism. It also could have just been him showing the main character changing his mind. Either way, the 180-degree transformation was done quite well, gradually paced enough to make it convincing. It’s not like a lightbulb suddenly went off in Snowden’s head at a certain moment, it was the knowledge gained over time that changed his views. When he and Lindsay are watching the 2008 election, you see him subtly smile when she says “c’mon, I know you’re cheering for him (Obama).” What he would later learn is that it’s not all about the president, it’s about the entire government changing its dishonest ways.

Although this movie was released a few years ago, it’s more relevant today than ever. Online privacy is still a hot-button topic, and although the public is more knowledgeable about it now, it still needs to get better. Until there is mass regulation put in place, the government will continue to spy on people through all of their devices. Although Snowden isn’t the only person to come forward about this topic, he’s the one who started the cultural conversation. He should get credit as a public servant and modern hero. If you’re unfamiliar with him, this movie is a good way to get to know his story.

What makes this film a worthwhile watch, as opposed to the many documentaries about online privacy, is that you feel the emotion. It’s not just facts about the government and the internet, you get to see someone’s personal journey as they get an inside look at a high-stakes situation. You go through the experience with him, even if you had prior knowledge. It gives a different perspective into a matter that directly affects every single person alive right now. Even if you don’t want to think about it (life is stressful enough already), it’s essential information to take in. Yes, it’s just a movie, but it directly pertains to the real world.

Snowden is another solid entry into Stone’s famous catalog. It won’t be as critically acclaimed as Platoon (1987) or some of his other movies, but it’s another example of his proficiency as a cinematic historian.