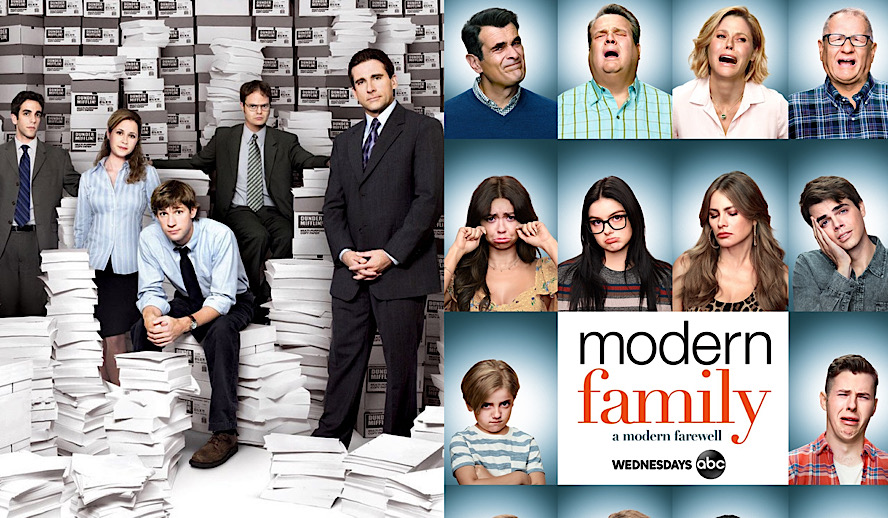 I consider myself a bit of a comedy connoisseur meaning that I watch a sitcom like a wine aficionado sips fine wine, if a wine aficionado sips fine wine with a Taco Bell burrito and a dusting of Cheeto debris on their shirt. I assume they do, I do not drink fine wine. In the early 2000s, an innovation happened in the American sitcom genre. Sure, single-camera TV had existed for quite some time but in the 21st century, we were introduced to the mockumentary TV show. This is somewhat of a super TV show. I say that because two of this relatively fledgling genre of TV comedy have made it onto this Ranker list of the greatest sitcoms of all time. This is because these shows have a more naturalistic style of comedy. Since the shows act like documentaries, the shows mimic real life. This means lots of awkward moments and unpolished dialogue which somehow manages to make the show more entertaining to watch.

Modern Family is a celebration of diversity and modern family values. It follows the Dunphy/Prichett family as they learn to navigate modern life as a family unit. This show continuously won the Emmy for Outstanding comedy series from 2010 – 2014 and it’s not hard to see why. It ushered in sitcoms for the new era, kissing goodbye to more white bread shows of the past. The show boasts an outstanding cast of both well-seasoned comedy actors and formerly undiscovered talent.

Parks and Rec is among the funniest and most popular shows of the modern-day. It features an ensemble cast of a quirky local government led by the hyper-enthusiastic Leslie Knope played by comedy legend Amy Poehler.  A group of government employees working in the Parks and Recreation department do their best to manage the parks of their zany town. This show is so incredibly funny because the entire cast knows how to bring the laughs. It included break out star Chris Pratt playing the lovable village idiot Andy Dwyer and Aziz Ansari, one of the best stand-up comedians out there. Add an unforgettable cast to a killer writing team and you’ve got a recipe for a fantastic show.

Put a bunch of former SNL cast members and writers in a room to work with a collection of classic documentaries and this is what you get. Every episode celebrates another documentary by parodying it to the fullest extent. This show is the most obscure on the list but it has a dedicated cult following who swear by it. I discovered this show when my boring documentary class in college watched an episode together. After watching, I not only became more interested in the show but more interested in documentaries in general. Documentaries seem like an untouchable genre to most of us, reserved only for people who use SAT words in regular conversation. But Documentary Now is in a language we all speak, the language of comedy. It’s such a uniquely funny show and each episode presents a different style of comedy with its new documentary subject.

This show boldly answers a question that no one bothered to ask: What do Vampires do in their downtime? What We Do in the Shadows features 4 vampires and one human assistant who all live in one house together. This show is so incredibly well written it will have you in tears from laughing so hard by the end of the first episode. Based on a 2014 feature-length mockumentary of the same name, if this isn’t the funniest show you’ve ever seen, Collin Robinson the energy-sucking vampire will personally come to your house and explain why you’re using the expression “I could care less” incorrectly. The cast is phenomenal. Matt Berry gained notoriety for being in one of the UK’s funniest sitcoms, The IT Crowd, and two cast members, Craig Robinson and Mark Proksch have been featured on the number one show on this list.

If you did not figure out what show was going to be number one when you read the title of this article, you have no taste in comedy. Yes, the mother of all mockumentary sitcoms, The Office is about the employees working at Dunder-Mifflin Paper and their zany boss. It’s one of the most beloved shows of all time and it’s not hard to see why. The cast has such amazing chemistry. Steve Carell leads the show as somehow both lovable and unbearable Michael Scott. The show also introduced us to Jenna Fischer as Pam Beasley and John Krasinski as Jim Halpert. Amazingly, this show had low ratings in its first season but thankfully, viewership shot up after Carrell got the attention of the public by starring in The 40-Year-Old-Virgin. The great thing about The Office is it’s not one of those shows that’s just gaming for laughs. The show has a beating heart and you genuinely care about each of the characters. Except for Toby. Go away, Toby! But of course, a show wouldn’t win the high accolade of number one on this list without bringing the funnies. And mark my words, it brings the funnies. It is one of the most quotable, meme-worthy, hilarious shows to ever grace our TV screens. Each character brings a unique style of humor to the table, from Creed the “this job is the only thing keeping me from being a hobo” guy to Jim’s wink at the audience persona. I have nothing bad to say about this show and suggest everyone pick up your remotes and watch it now.