‘Space Jam: A New Legacy’ – Passes the Ball To a New Generation With Wild, Sci-Fi Fun 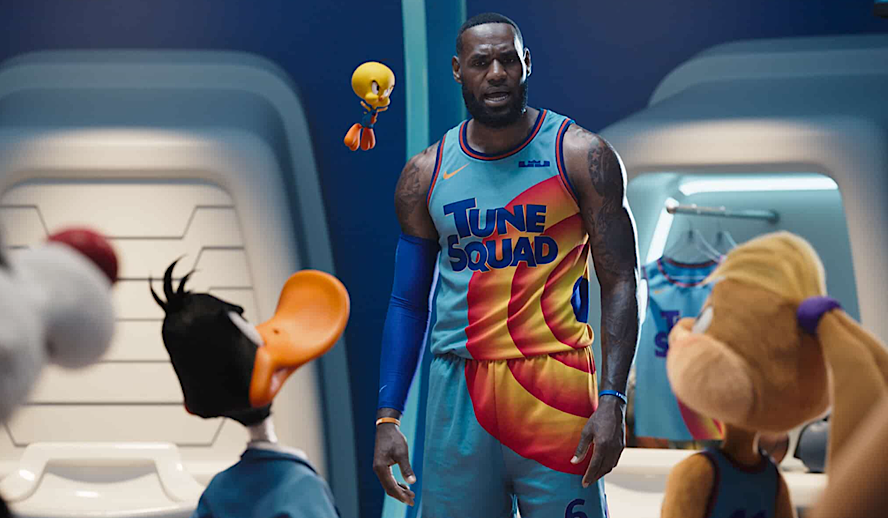 In the world of sports movies, 1996’s ‘Space Jam’ is definitely out there in terms of concept. The idea of Michael Jordan playing basketball with the Looney Tunes sounds like something an executive at Warner Bros. would’ve thought up in a fever dream. Still, the movie’s loved by fans, with many loving the energetic, zany humor that the Looney Tunes bring on the court with the greatest basketball player of all time. Plus, Bill Murray’s in it! And who doesn’t love Bill Murray?

‘Space Jam: A New Legacy’ – Full Commentary & Behind the Scenes

Jokes aside, it’s now 25 years later, and we’re finally getting a sequel. ‘Space Jam: A New Legacy’ brings a lot of the fun from the previous movie over to a new generation. Bugs Bunny and the gang are back, and now they’re teaming up with another great basketball player, LeBron James. Watching him team up with the Tunes is a lot of fun and it makes for an enjoyable movie for the kids. For the parents, however, it’s passable enough to just turn your brain off and enjoy the show. The jokes don’t always land and there’s a lot of IP advertising on Warner Bros. part that can sometimes be distracting, but otherwise, the movie succeeds at what it sets out to do: Bring ‘Space Jam’ to a new generation of kids.

So, What’s It About?

‘A New Legacy’ follows a fictionalized LeBron James as he tries to get his sons, Darius and Dom, to be like him and become a great basketball player. Darius (Ceyair J. Wright) is highly skilled, but Dom (Cedric Joe) is more interested in creating video games, something he is a near-prodigy at. Meanwhile, the Warner Bros. algorithm AI, Al-G Rhythm (Don Cheadle), wants to be recognized for his efforts in running the studio’s server. After being humiliated by LeBron, Al-G lures and transports him and Dom to “The Warner Bros. Serververse”, a digitized world inside the studio’s computers that houses all of their famous franchises. Sounds like a lot? Believe me, it is.

Al-G kidnaps Dom and challenges LeBron to a basketball game: If he wins, he can get his son back and leave the Serververse. If he loses, they’ll both be trapped there forever. Thus, through a series of events, LeBron must recruit the Looney Tunes to help him win back Dom and dribble his way back to the real world.

‘Space Jam: A New Legacy’ – The Performances and the Return of the Tunes

Performance-wise, there were some hits and misses. LeBron James was passable as the leading man here, but it’s clear he’s not an actor, similar to Michael Jordan’s somewhat rigid performance in the original. He does a decent job that doesn’t take away from the story or anything, but for fans who were hoping for a performance on par with his great role on ‘Trainwreck’, you’ll probably be disappointed. Cedric Joe does a good job as Dom James, the black sheep who wants to pursue his dreams of game design, even if it completely goes against his father’s wishes. Same with Sonequa Martin-Green as LeBron’s wife Kamiyah James. She doesn’t have much screen time, but when she’s in, she brings the motherly vibe needed for her character.

The best performance of the whole film belongs to Don Cheadle as Al-G Rhythm. Surprisingly enough, he plays a great villain who works to drive a wedge further between LeBron and his son. He’s charismatic, cunning, and everything you’d want from a fun movie villain. He sees everything through the internet, which is a particularly creepy but effective message about technology’s power over our lives, and Cheadle embodies this easily.

But for the Looney Tunes? They’re back, and just as odd and outlandish as ever. This is their first time back on the big screen since ‘Looney Tunes: Back in Action’ back in 2003, and their return is a welcome one. Bugs Bunny, Daffy Duck, and the gang are all equally as wild and zany here as they are in the original ‘Space Jam’, and it’s fun watching them mess around and commit cartoon violence as usual. Most of the characters are voiced by veteran Looney Tunes voice actors Eric Bauza and Jeff Bergman, who give great performances from the wide cast of characters. The animation is stellar, both the traditional hand-drawn and the CGI. I was nervous about seeing the Tunes all updated in 3-D as seen in the trailer for this film, but it works surprisingly well and still looks clean. If you’re a fan of old cartoons and these classic characters, you’ll enjoy them here too.

Being True to Oneself

If ‘Space Jam: A New Legacy’ has a specific theme, it’s definitely about individuality. Throughout the film, LeBron and Dom clash over their respective ideologies. LeBron used basketball to build a better life for himself and his family and he wants to pass that to his kids. But Dom isn’t skilled at basketball and would rather keep working on the basketball video game that he’s created. They’re both at a crossroads, but ‘A New Legacy’ never paints either of them as a villain for their beliefs. The film hammers home how being true to yourself can bring out the best in you, and despite that message being a little on the cliche side of things, it’s still a nice message for kids to hear.

Despite this, the film is not without its flaws. The jokes don’t always land and sometimes feel awkward. There’s a lot of meta jokes that are pretty clever and had me laughing in my seat. (There’s one, in particular, that occurs near the end of the film that definitely cracked me up.) But still, despite the Tunes being funny, a lot of the humor from LeBron feels awkward and forced. Not enough to detract from the film, but enough to notice it.

The film’s biggest issue comes from Warner Bros.’s push to use existing IPs (Intellectual Properties) to help carry the film. Some of this was used in humorous ways, such as seeing Daffy and Porky Pig in DC World or Wile E. Coyote and the Roadrunner in the ‘Mad Max’ universe. But there were a few times where the world felt oversaturated with other characters from existing properties and the movie felt like one big advertisement. During the big game in the final act, different film characters all fill out the audience and it can get pretty distracting to try and follow the action when certain noticeable characters in the audience catch your eye.

It wasn’t too distracting for me, but enough to be detrimental to the film, and something that could be distracting for many viewers as well. Honestly, it felt like a copy of ‘Ready Player One’, a movie where the use of all those IPs felt like a wild, crazy joyride. Here, it just feels kind of cheap.

Overall, ‘Space Jam: A New Legacy’ is still a lot of fun. It’s definitely a film marketed towards children, which is fine. Kids will definitely enjoy seeing the Tunes bring their chaotic energy as well as watch LeBron shoot hoops against CGI avatars of famous NBA and WNBA players. for the parents watching this with their children, or any other older person really, it doesn’t have much to offer that you haven’t seen before. It’s very similar to the original ‘Space Jam’ movie in terms of humor and story, so take that with what you will. But in terms of updating ‘Space Jam’ for a new generation, it succeeds in passing the torch to the kids of the present.

‘Space Jam: A New Legacy’ is out now in theaters and on HBO Max.