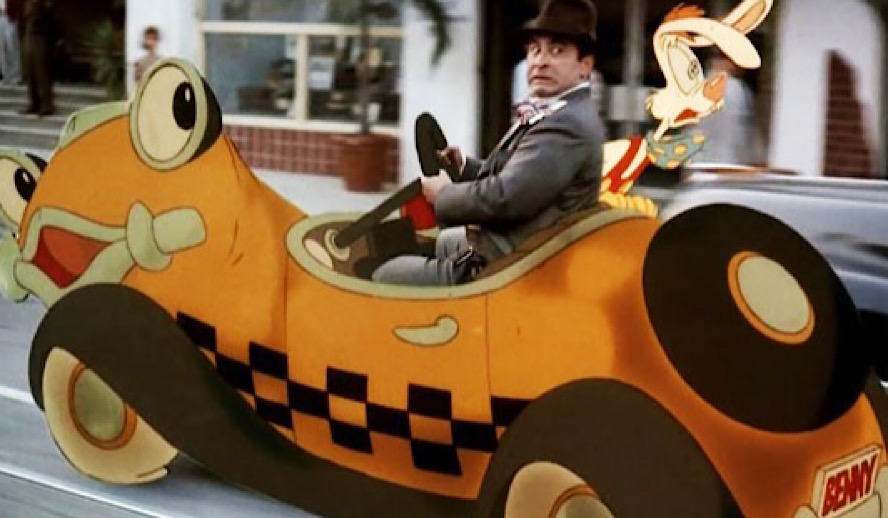 ‘Infinity War is the most ambitious crossover event in history–’ but have you seen Donald Duck and Daffy Duck dueling pianos? It’s one of the most memorable scenes from Who Framed Roger Rabbit (1988), which famously marked the first and only time that characters from Disney and Warner Bros. cartoons would share screen time.

For those unfamiliar with the film, it follows disillusioned PI Eddie Valiant (Bob Hoskins) as he investigates a series of murders in a version of 1947 Los Angeles where cartoon characters are real. Referred to as “toons,” they possess logic-defying abilities and innate senses of humor that are best put to use on camera, where they’re treated as actors in films (which are the cartoons that we know and love). They live in a segregated community known as Toontown, whose existence is put in peril as the film progresses.

It’s a loving send-up to the hardboiled detective and the Golden Age of American animation. Although it’s far from the first film that featured humans interacting with animation, it’s a truly unique experience that captures the innocent, nostalgic joy of cartoons while parodying the darker, adult themes of classic film noir.

What does this charming, feel-good classic have anything to do with Bye Bye Brazil (1980), a critically-acclaimed Brazilian film about a traveling magic act that resorts to prostitution to survive?

As the film unravels, it becomes evident that the main conspirator behind the film’s plot is Cloverleaf Industries, whose four-leaf clover logo cleverly resembles an aerial view of a four-way highway intersection. They buy out the Red Car with the intent of dismantling it so that people will be forced to drive, paving a freeway in its place. This plotline is a direct reference to a real-life conspiracy between General Motors, Firestone Tire, and a number of oil companies to monopolize and dismantle streetcar systems across the US throughout the ‘30s and ‘40s.

The film comes to a head when Valiant discovers a plot not only to destroy Toontown in order to make way for the freeway, but also to commit genocide against the hitherto-immortal toons using a newly concocted solution called “the Dip” that’s composed of turpentine, acetone, and benzene (all of which are paint thinners).

Bye Bye Brazil presents a far less cartoonish vision of a similar struggle taking place south of the equator. Although the central plot doesn’t directly revolve around the construction of freeways as does Who Framed Roger Rabbit, it’s a major thematic recurrence that is referenced throughout.

The film begins with the “Caravana Rolidei” (Holiday Caravan), a small troupe of traveling performers composed of magician Lorde Cigano (Gypsy Lord, José Wilker), exotic dancer Salomé (Betty Faria), and strongman Andorinha (Swallow, Príncipe Nabor), visiting a poor town in the sertão, a Brazilian term with no true English equivalent–it’s roughly comparable to the Australian Outback or, to a lesser extent, the American South. Through it flows the São Francisco River, which is culturally comparable to the Mississippi. The film’s opening image is of people navigating the river on small boats and ferries, an evocation of a more traditional mode of transportation.

A local of this village named Ciço (Fábio Jr.) is enchanted by the Caravana Rolidei and persuades them to take him along, bringing his pregnant wife Dasdô (Zaira Zambelli) with him. He soon learns that the Caravana Rolidei, initially glamorous to his Sertanejo sensibilities, are themselves superannuated, struggling to find business in a rapidly developing Brazil where people would rather watch TV.

An aspect of Brazilian modernization that is commonplace and openly talked about among the characters of the film, but which is overlooked by the broader American consciousness, is the genocide of the Brazilian indigenous peoples and the deforestation of the Amazon. In one scene, a passing trucker tells Lorde Cigano about the economic frontier that’s opened up along the newly constructed Trans-Amazonian highway. “Ore and precious stones are just lying on the ground,” he tells him, which is prescient of the boom in mining that would occur in the 1980s. The conversation continues as follows:

“Are there many Indians?” asks Lorde Cigano.

“There used to be. But people got rid of most of ‘em. Sometimes they were a real pain. So people lost their patience, hired a plane, and dropped dynamite sticks on their villages. They fled into the woods like it was the end of the world. Some joke!”

Attacks on the Brazilian indigenous peoples and exploitation of the Amazon continue to this very day–the total area of rainforest that’s been cleared since 1980 is greater than double the landmass of Germany, which not only has severe ecological implications but also cultural ones for the indigenous people, who have traditionally resided in and relied on the jungle.

In the US, the destructive element of highway construction has been largely overlooked. Federally supported “urban renewal” was the policy of decimating lower-income urban communities, generally consisting of African-Americans and other minorities, to pave highways in their place. A notable example is the destruction of Black Bottom and Paradise Valley in Detroit to build the I-375. The displaced inhabitants of these communities were forced to relocate, causing overcrowding and increased crime, while richer folks could afford to move to the suburbs, which were now conveniently connected to urban centers via highways.

Who Framed Roger Rabbit is a clear and specific reference to the fact that marginalized communities composed of economically disadvantaged minorities were the ones that suffered in the name of “urban renewal.” The aforementioned piano duel between Donald Duck and Daffy Duck takes place at the fictional “Ink and Paint Club,” where performers and waitstaff are toons while patrons are strictly human. This is in reference to the Harlem Cotton Club, in which performers were black and patrons were white, specifically nurturing a “stylish plantation environment.”

These films remind of us the bones on which society is built. Who Framed Roger Rabbit has a happy ending when life often does not, and we live in a world where toons have long lost the battle.