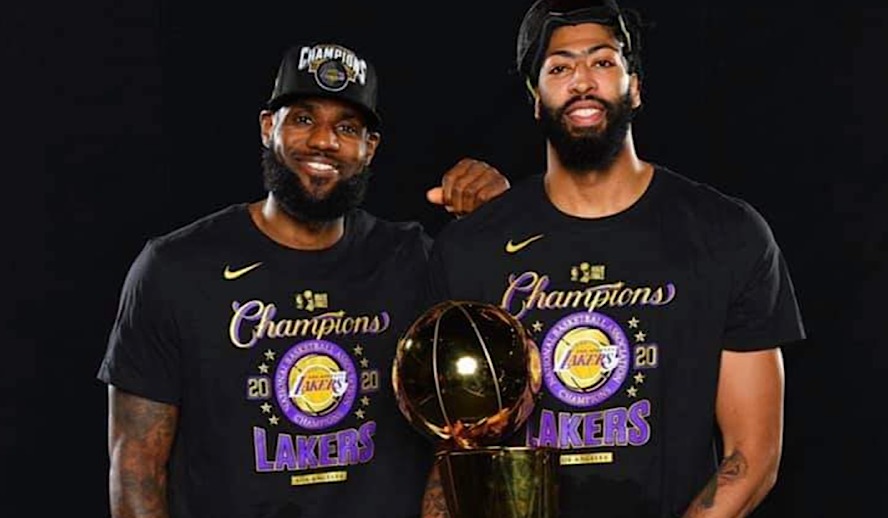 “We just want our respect…Our organization wants their respect. Laker Nation wants their respect. And I want my damn respect, too,” said Lakers forward LeBron James after his team hoisted the NBA Finals trophy on Sunday night. It’s safe to say that they have earned it, with LA tying the Boston Celtics for the all-time lead in championships. James also added to his own personal legacy, winning his fourth ring and becoming the first player to win titles with three different teams. He also won his fourth Finals MVP award and is also the first to win that award with three different organizations. But it’s not the individual accolades that made this special.

The world was traumatized after Kobe and Gianna Bryant’s tragic deaths back in January. Just a few weeks later, the COVID-19 pandemic materialized into an apocalyptic event that nobody knew what to make of. Sports were put on hold for the foreseeable future. Then, commissioner Adam Silver instituted the NBA Bubble, with contending teams traveling to Orlando and staying in hotels to play out the remainder of the season. The experiment was a resounding success, with zero positive tests recorded over the three months of play. It’s fair to say that the NBA has set an example for the rest of the country in terms of how to keep a group of people safe. The Trump Administration should take notes, but they probably won’t.

Don’t Forget About the Player Strike

In late August, there was another disease that threatened to end the season: systemic racism. After the police shooting of Jacob Blake in Kenosha, Wisconsin, the players decided to take a stand against the well-documented injustice towards people of color. The Milwaukee Bucks first responded by sitting out their first-round playoff game against the Orlando Magic, and the rest of the league quickly followed suit. What followed was two days of emotional player meetings, online speculation, and plenty of uncertainty. Players considered walking away for the rest of the season.

“[A] lot of our top guys, most teams, wanted to be here, wanted to play. But if we don’t stand for [anything] we won’t get anything done. So we were willing to walk away” said Lakers player Danny Green.

They ultimately decided to come back after negotiating with the league to form a social justice coalition. The league’s statement said the coalition will focus on “voting initiatives, promoting civic engagement, and advocating for meaningful police and criminal justice reform.” They’ve already made progress, as National Basketball Players Association (NBPA) president and Thunder player Chris Paul recently announced that more than 90 percent of the league is registered to vote. While this is only a small step, it’s an encouraging way for the players to lead by example in these urgent times.

Los Angeles Lakers – It’s a Poetic End to the Season

After play resumed, James and fellow star Anthony Davis led the Lakers through the twists and turns of the NBA playoffs and finals, finishing 57-0 when leading after three quarters. According to ESPN Stats and Information, they also became the first squad to never give up a lead in the fourth quarter at all. It’s hard to beat a team when they’re so automatic in the second half. While Jimmy Butler and the Miami Heat gave LA a run for their money, they ultimately couldn’t finish the job. The Lakers knocked off James’ former team in six games, capped off with a dominant 106-93 victory in game 6.

Related article: Fact-Checked Series: Kobe Bryant and the 32 Facts You Did Not Know About The Legend

What a full-circle moment it was for the LA fanbase. Months after losing one of the organization’s most beloved icons, they watched their team win it all in an unusual season that easily could have finished without a champion. A sea of purple and gold jerseys came outside the Staples Center in LA to chant “Kobe, Kobe, Kobe!” after the game ended.

Lakers general manager and Bryant’s former agent Rob Pelinka got sentimental in his postgame interview, saying “There would be times in the middle of the night I’d hear his voice, ‘Stay the course, finish the task’…To be able to have a friend who changed my life and helped me understand what greatness was about and (what) sacrifice was about, there’s not many greater gifts.”

Of course, social media sounded off as well. Lakers guard Quinn Cook tweeted a picture of Kobe and Gigi, saying “we love you!” Kobe’s wife Vanessa Bryant also posted to Instagram, saying “Go Lakers! Wish Kobe and Gigi were here to see this.” While they may not be here to enjoy it, it’s safe to say that they’re up in the clouds somewhere smiling. Kobe predicted back in 2018 that LA would soon win another ring, and it seems like he was onto something.

What does it mean?

There are many more layers to the end of the season than there normally are. For one, where does it put James in the never ending “greatest of all-time” debate? He and Michael Jordan are now the only players with four Finals MVPs to their names. While it may be difficult for James to be the consensus G.O.A.T. until he catches up to Jordan’s tally of six championships, he is certainly inching closer to the Chicago Bulls legend. As James’ former teammate Dwayne Wade noted on Twitter, “his legacy is still being written…..”

More importantly, what does it mean for the league overall? When will the next season start, and will there be fans allowed in arenas? Silver said that it will most likely start in 2021, but there’s still no official start date. Will there be another Bubble? Regardless, the NBA has clearly earned the right to be trusted. Outside of the temporary player strike, the season went as smoothly as it could during a global pandemic. Nobody could have asked for a better result given the circumstances. In a bleak time for the world, the league still has a bright future.