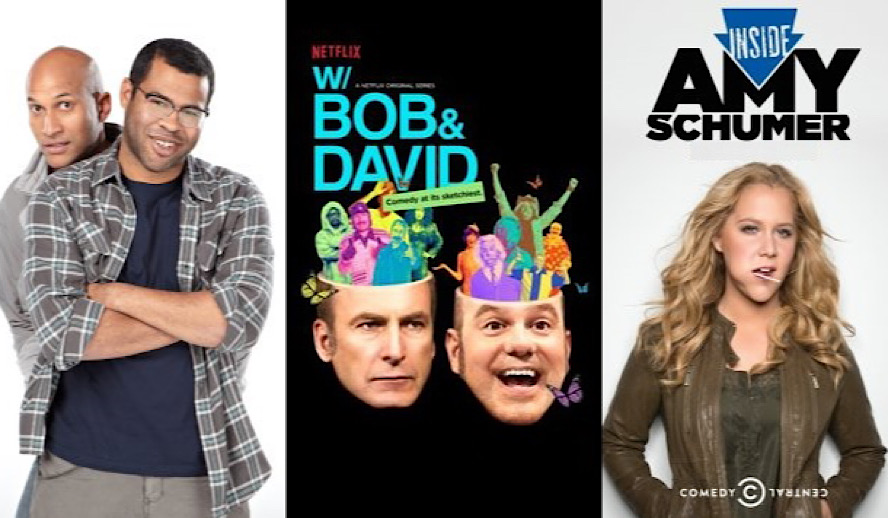 Sketch comedy, which refers to brief humorous acts or short comedy scenes, didn’t grow its own legs until the second half of the 20th century. Other than a segment of vaudeville acts that bunched together to form a larger narrative, no one was doing sketch comedy for the sake of doing sketch comedy. Vaudeville and theatres originated the format, specifically with improvisational venues such as The Second City, which was founded in December of 1959. Around the same time, artists began doing sketch comedy on the radio, with hits It’s That Man Again, and I’m sorry, I’ll Read That Again being instantly beloved. Gradually, the art form began to shine on screen. Shows like Not Only… But Also, The Carol Burnett Show and Monty Python’s Flying Circus began to transcend the comedy landscape by introducing disparate forms of sketch comedy, doing it in ways no one else had ever thought of, therefore inspiring generations upon generations of comedians and artists all around to make sketch comedy of their own. Just six years after Monty Python’s Flying Circus debuted, Saturday Night Live blew the hinges off American’s sketch comedy scene and has been a pioneer in the genre ever since. Other types of sketch shows like Sesame Street and The Muppet Show were avant-garde in the 60s and 70s, with recurring iconic characters and content tailored towards all ages. Since then, the momentum of sketch comedy has only grown, with more and more artists trying to replicate and innovate what SNL and Monty Python did before it.

Related article: ‘Bill and Ted Face the Music’: A Pitch-Perfect Comedy About Going Out on a High Note

Sketch Comedy in the 21st Century

At the turn of the 21st century, SNL was still huge, with stars such as Rachel Dratch, Will Ferrell, and Tracy Morgan, other sketch shows were culminating in the undercurrent. MadTV had been on the air for five years, Adam Carolla and Jimmy Kimmel’s The Man Show was gaining momentum, and lighter sketch shows for younger audiences, such as Amanda Bynes’ The Amanda Show were getting big. But what many in the industry might’ve foreseen, but audiences across the world ate up like it was a brand new thing, was that top tier comedians and writers would turn the 21st Century into a golden age for sketch comedy. One particular sketch show that blew the lid off of the genre was Dave Chappelle and Neal Brennan’s Chappelle’s Show. The show debuted in January 2003 and was met with wide critical and commercial acclaim. There was nothing quite like it, not only because it was created, written, produced, and hosted by such a young Black comedian, but also because of the subject matter in most of the sketches, which tackled issues of racism, homophobia, misogyny, and pop culture in a uniquely irreverent comedic way from a unique perspective.

Home of Monty Python, the U.K. still held an impressive roster of sketch comedians, which would explode in the second half of the 2000s. One of which was Julian Barratt’s and Noel Fielding’s The Mighty Boosh debuted in 2004 and is hailed by many as being a near-perfect sketch comedy show. The show was zany, idiosyncratic, and daring in a way no other sketch show had ever been, and still holds up immensely today. Future Parks & Rec star Aziz Ansari’s teamed up with acclaimed comedians and actors Rob Huebel and Paul Scheer to create Human Giant in 2007, which was an online and live sketch show that was later picked up by MTV. The show was known for employing a mainstream, skillful sketch comedy craft with edgy, and oftentimes dark humor. It showed a flexibility to sketch comedy that would only grow in the coming years. An example of the wild and off-the-wall sketch comedy coming out at the time similar to Human Giant is Tim and Eric’s Awesome Show, Great Job! which also aired in 2007, but on Adult Swim.

The Internet’s Impact on Sketch Comedy

Standing on the shoulders of internet sensation turned SNL stars The Lonely Island was a popular YouTube sketch comedy group GoodNeighborStuff. The four-man group consisted of future SNL stars Kyle Mooney, Beck Bennett, Nick Rutherford, and Dave McCary. They pioneered how sketch comedy was made and distributed with their often simplistic sets and storylines that showcased their performing and writing talents more than anything. The group transcended the internet comedy scene, showing that quality content can be made very cheaply and simplistically. To this day, YouTube comedians are using their techniques for producing internet sketch comedy videos and walking the path GoodNieghborStuff paved, such as Trevor Wallace, Slappers Only, and Cherdleys.

Apps like Vine and TikTok set time limits on the length of their videos, so comedians learned how to condense comedic content within a short amount of time. This has been immensely popular, especially amongst younger audiences, and has been the most innovative form of sketch comedy in recent years. Tubi, a streaming service that splits content into micro-segments, is jumping on this trend too, realizing audiences are preferring shorter content more and more as the years roll on. The internet has ultimately altered sketch comedy for the digital age but challenging it to say more with less.

The Present and Future of Sketch Comedy

The 2000s brought edgier, distinct, and creatively wild sketch comedy, but the 2010s multiplied creative diversity with social diversity, giving people from underrepresented groups a platform to stand on. An example of this is Amy Schumer’s 2013 debut Inside Amy Schumer, which brought female prowess to sketch comedy in a way that hadn’t been done since The Carol Burnett Show. With sketches and subject matter very similar to Chappelle’s Show came the legendary sketch comedy show that would be one of the most heavily quoted, studied, and watched of all time, Keegan Michael Key and Jordan Peele’s  Key and Peele. The show was embraced warmly by critics and audiences of all types, even former President Barack Obama, who Jordan Peele famously impersonated. Since its release, Key and Peele has always been in the same conversation as the sketch comedy greats like The Carol Burnett Show, SNL, and Chappelle’s Show.

In the past few years, sketch comedy has continued to grow and morph into many different forms. There’s the new and unique Portlandia, that takes the structure as a two-person variety show like The Mighty Boosh, but in the city of Portland, Oregon, which is portrayed as a modern hipster campground. In 2019, Netflix released The Lonely Island produced Tim Robinson’s I Think You Should Leave, which featured niche, quirky, sometimes outlandish comedy of all types, but was executed and produced with such high quality that it comes across as a mainstream product. With the COVID-19 pandemic, sketch comedy has been limited, but many comedians have learned how to make quality content within the confines of their home, which SNL demonstrated at the end of its 45th season, and numerous YouTube and TikTok stars have shown. Short-form sketch comedy has dominated the mainstream, as the popularity of videos on social media have shown. Classics like SNL have kept the art form alive, and many shows are staying true to icons and their forms within the genre successfully. Though creative diversity has certainly expanded, audiences have stayed true to the sketch comedy giants of their time, as talented comedians are always propelling sketch comedy into the zeitgeist.