‘Godzilla vs Kong’ Review: Delivers Exactly What You Would Expect and Hope for 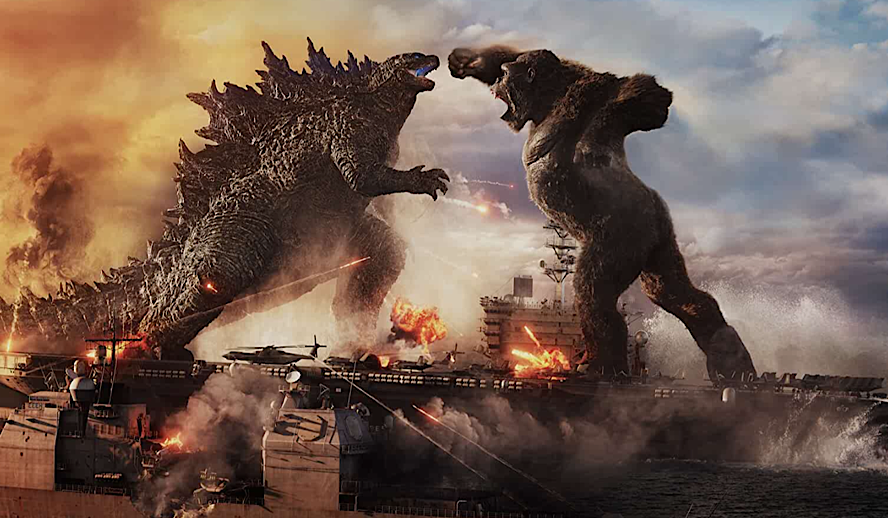 At the time of the original 1962 ‘King Kong vs. Godzilla’, it wasn’t expected to be the genre-defining crossover event that we know today. To pit two monsters together was simply a convention of the time, inspired by Universal Horror’s classic monster mash-ups involving characters like Dracula, the Wolf Man, and Frankenstein’s monster.

In fact, the film was originally conceptualized by one of King Kong’s original stop-motion animators as a Kong/Frankenstein crossover. Vestiges of this remain in the finished film, including multiple scenes in which electricity/lightning reinvigorates Kong, and there’s actually a scene in the new ‘Godzilla vs. Kong’ that potentially pays homage–in one scene, our human protagonists must retool one of the ships they used to travel to the center of the Earth (more on this later) into an impromptu defibrillator.

Related article: A History of ‘Godzilla’, Coming Full Circle with ‘Godzilla vs. Kong’

In a multitude of ways like this, ‘Godzilla vs. Kong’ is clearly a labor of love. Director Adam Wingard is an informed fan, much like the directors of ‘Godzilla’, ‘Kong: Skull Island’, and ‘Godzilla: King of the Monsters’ before him–that’s what ultimately pushes not only this film to succeed, but also Legendary’s MonsterVerse as a whole.

As much as Godzilla’s identity revolves around a serious contemplation of nuclear destruction, the environment, and humanity’s place in nature, so does it revolve around intentional campiness that requires an audience who’s willing and able to appreciate the spectacle for what it is–there’s an inherent absurdity, the acceptance of which is your admission ticket.

There’s also an inherent appeal–the desire to see ‘Godzilla vs. Kong’ is rooted in the same basic instinct that not only brought about other cinematic crossovers like ‘Alien vs. Predator’ and ‘Batman v. Superman’, but also sporting events like Mayweather vs. McGregor and WWE Showdowns.

On these terms, ‘Godzilla vs. Kong’ is an unequivocal success–as a Godzilla fan, there’s little more that one could ask for. A movie like this lives or dies on the quality of its action, and the action is good.

In spite of their regal bearings, Godzilla and Kong duke it out like a street brawl–Godzilla uses his atomic breath and reptilian affectations (biting, clawing, using his tail), while Kong fights like a wrestler, utilizing dropkicks, double-fisted hammer punches, and high-flying moves (using the buildings of Hong Kong as ring posts). There’s a satisfying weightiness that you notice when Kong lands his first solid punch on Godzilla’s face, and that’s the moment when the movie starts to get good.

Meanwhile, Hong Kong crumbles like a sandcastle–millions have surely perished, yet both the audience and the human characters of the film cheer at the end. That, too, is the appeal of Godzilla’s particular brand of camp–in a kaiju film, the destruction of a city is simply the cost of business.

What really puts the action over the top, however, is the anthropomorphization of the Titans. Kong, who we follow for much of the film as the protagonist, has big, soulful eyes that demand sympathy, but that’s not surprising–as an ape, he’s almost human anyway. Even in the 1933 original did he elicit pity for his capture and humiliation, and of course “‘twas beauty killed the beast.”

What you wouldn’t expect, however, is Godzilla himself mugging directly into the camera–and yet, he does. Numerous times throughout the film, generally after he knocks Kong on his ass, Godzilla delivers a cheeky, devilish grin that gives their rivalry an adolescent, schoolyard vibe. What prevents the action from becoming monotonous is the amount of personality that’s bestowed by the animation alone–one of the film’s most entertaining moments is a shouting contest that the two have in the middle of their final showdown.

Clocking in at a timely 113 minutes, ‘Godzilla vs. Kong’ doesn’t waste too much time–still, its first act is devoted to a myriad of human characters that are just not as interesting. At the risk of sounding like a goldfish, 40 minutes is longer than I would expect for a movie like this to really get going, but an inordinate amount of time is spent on bumbling comedy or exposition that will ultimately fail to adequately explain anything anyway.

That said, what I appreciate about this film is how it leans into the fantastical. Using Kong as a guide, for instance, a group of humans, including Monarch scientists Dr. Nathan Lind (Alexander Skarsgård) and Dr. Ilene Andrews (Rebecca Hall), Apex Cybernetics executive Maia Simmons (Eiza González), and Dr. Andrew’s deaf adopted daughter Jia (Kaylee Hottle), travel to the center of the Earth (with a visual send-up to ‘2001’). Here, contrary to elementary school geology, the Earth is hollow–within it exists a vast monster ecosystem.

Jia, a young orphan girl native to Kong’s Skull Island, acts as Kong’s connection to humanity and communicates with him through sign language–she is the only human that he trusts. It’s a welcome addition to the cast that evokes the more mystical elements of the Godzilla mythos (like Mothra’s priestesses). González also stands out by consistently delivering the most gaping expressions of horror.

In a seemingly unrelated subplot, Madison Russell (Millie Bobby Brown, reprising her role from ‘King of Monsters’), Bernie Hayes (Brian Tyree Henry), and Josh Valentine (Julian Dennison) investigate a conspiracy within Apex Cybernetics. In an age where most people fully expect corporations to engage in shady things, there’s nothing particularly interesting about this exposition-filled subplot–its saving grace is the reveal, which introduces into the fray a third, equally iconic adversary who you might have recognized from the trailer.

At the end of the day, ‘Godzilla vs. Kong’ fully delivers on its premise, and more. It looks great, the action is good, and it doesn’t take itself too seriously. It’s the return of the blockbuster after a long year of quarantine, and it emerges triumphant–perhaps, like its 1962 counterpart, its success could ignite the next era of ‘Godzilla’ movies.

Following in Warner Bros release strategy for 2021, ‘Godzilla’ is available to watch both in theaters and on HBO Max, with a subscription, until April 30–CLICK HERE to watch.

Alexander Skarsgård will star in the upcoming historical thriller ‘The Northman’ as the Nordic prince Amleth, directed by Robert Eggers and co-starring Anya Taylor-Joy, Nicole Kidman, and Willem Dafoe.

Brian Tyree Henry will star in Marvel Studios’ upcoming ‘Eternals’, directed by Chloé Zhao (‘Nomadland’) and co-starring Angelina Jolie, Richard Madden, Lauren Ridloff, Salma Hayek, Lia McHugh, Don Lee, Kit Harington, Gemma Chan, and Barry Keoghan. ‘Eternals’ is scheduled to be released on November 5. Henry also stars in ‘The Outside Story’, a drama about an introverted editor who gets locked out of his apartment and explores the neighborhood. ‘The Outside Story’ is scheduled for release on April 30.

Eiza González will lend her voice to DreamWorks Animation’s upcoming ‘Spirit Untamed’, directed by Elaine Bogan as a standalone sequel to the 2002 ‘Spirit: Stallion of the Cimarron’. ‘Spirit Untamed’ is scheduled to be released on June 4.