‘I Care a Lot’: A Stylish Criticism of Late-Stage Capitalism 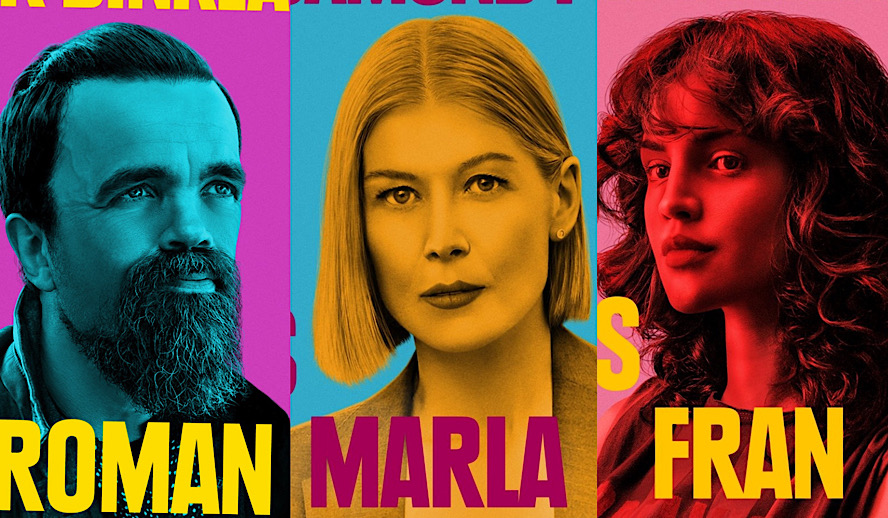 Photo: ‘I Care a Lot’/Netflix

Boarding a plane in Texas, Melania Trump asked all of us a question in the form of a jacket– ”I really don’t care, do u?”

Seemingly in response, writer/director J Blakeson released ‘I Care a Lot’, a well-dressed dark comedy thriller about Marla Grayson (Rosamund Pike), a con artist who traps the elderly within her court-appointed guardianship and leeches them of their wealth. Doing so, she runs a smooth and lucrative business that goes awry when her latest target, Jennifer Peterson (Dianne Wiest), attracts the hostility of Roman Lunyov, a powerful crime lord (Peter Dinklage).

Humor drips from its sharp wit, driven by the icy, duplicitous charisma of Rosamund Pike, but it shares its bleak cynicism about American capitalism with films like ‘Killing Them Softly’, offering no likable protagonists or light at the end of the tunnel. This is an ugly story about detestable people where greed is the only motivation, and that’s what’s initially engrossing–it’s also what makes it hard to watch.

‘I Care a Lot’ begins with a concise demonstration of Marla’s operation–first, she defends herself in Family Court against Mr. Feldstrom (Macon Blair), whose mother is her legal ward. Passionate and disheveled, he charges Marla with abusing her power to imprison his mother and steal her wealth. She counters him with unnerving composure as she easily convinces the witless Judge Lomax (Isiah Whitlock Jr.) that Mrs. Feldstrom is better off under her care.

We’re subsequently introduced to her lover and partner in crime, Fran (Eiza González), as well as the local cabal of health professionals who aid her with her schemes. Her life’s work is seen on her office wall, which is covered with photographs of each legal ward. When one dies, she laments the lost income and crumples his photo, discarding it.

The film would be impossible to watch without Pike, who channels the same energy as her Oscar-nominated role in ‘Gone Girl’. Beneath the porcelain perfection of her perfectly-trimmed bob, Marla is so gleefully amoral that her victories make us cringe in our seats–it requires a thoroughly compelling performance to not lose the audience outright.

She’s a classic symbol of American greed and late-stage capitalism, taking advantage of bureaucratic Catch-22’s to destroy people’s lives in pursuit of nothing more than a payday, but this only takes the movie so far. The story progresses when Marla targets a supposed “cherry,” or easy payday, in the form of Jennifer Peterson, only to find that she’s unwittingly put herself in the crossfire of Roman Lunyov, a mysterious and powerful crime lord.

The film’s humor and satire come from the understanding and acceptance that its so-called protagonist is human scum, and it establishes its premise succinctly–Marla, like her or not, is immediately engrossing, and we watch to find out how she manages to outwit her adversary. At the very least, we stay to witness her downfall, as it so often goes with parables of greed.

Unfortunately, the answer to how she succeeds is plot armor, and an intriguing set-up makes way for a more conventional thriller. To go into too much detail would spoil the film’s meandering plot, but you may find that our hero’s triumph comes more from luck and the antagonists’ bumbling incompetence.

Furthermore, Marla is half-heartedly humanized to a degree that betrays the film’s own moral indictment of its protagonist, or else making you wonder if we’re actually supposed to root for her. Marla is offered $300,000 to release guardianship over Jennifer but refuses to take less than $5 million. When a friend is murdered as a result, we see her mourn–but why should we feel sorry?

You might immediately respond that we’re not supposed to, but that’s not the way it’s played. As the film progresses, the idea of a moral comeuppance drifts further and further away as we see everything fall into place–Marla gets all she wants and more, commenting on our dystopian culture that promotes psychopathy to succeed.

Consequently, when the comeuppance arrives, we’re left confused. It purports the idea that, at the end of the day, there really are consequences for being a bad person–but that’s the assumption we all hold going in that Blakeson rejects throughout. Forgive me for continuing to speak in such vague non-spoilers, but the ending seems to operate on the assumption that you can actually be won over by and root for its protagonist in earnest–I never could.

‘I Care A Lot’ – Final Thoughts

Pike has justifiably been nominated for the Golden Globe for Best Actress in a Motion Picture–Comedy or Musical, but the entirety of the cast manages to hold their own, refusing to be dwarfed by Pike’s powerhouse performance.

It’s these compelling performances, in combination with a tightly composed first act and sardonically cheeky dialogue, that carry the film and retain your attention despite the plot’s meandering middle portion–nevertheless, you wish that it could live up to its premise, which promises a postmodern satire of late-stage capitalism. Instead, clichéd thriller sequences lead to a thematically cohesive, but narratively unjustified conclusion that doesn’t have anything new to say about the moral failures of capitalism, let alone elder abuse.

What we’re ultimately left with is an engaging, but inconsistent thriller that will retain your attention to its dramatic conclusion, but not without its fair share of hang-ups. By the end of the film, you realize that ‘I Care a Lot’ isn’t quite the ironic title as it originally seems, but you wish that it would be.

Eiza González is poised to appear in the upcoming movie ‘Godzilla vs. Kong’, directed by Adam Wingard and set to debut on March 31, 2021, in movie theaters and on HBO Max.

‘I Care a Lot’ is available to watch on Netflix in the. U.S.–CLICK HERE TO WATCH