‘Vampires vs the Bronx’: Comedy Horror is Revitalized in a Fresh Way 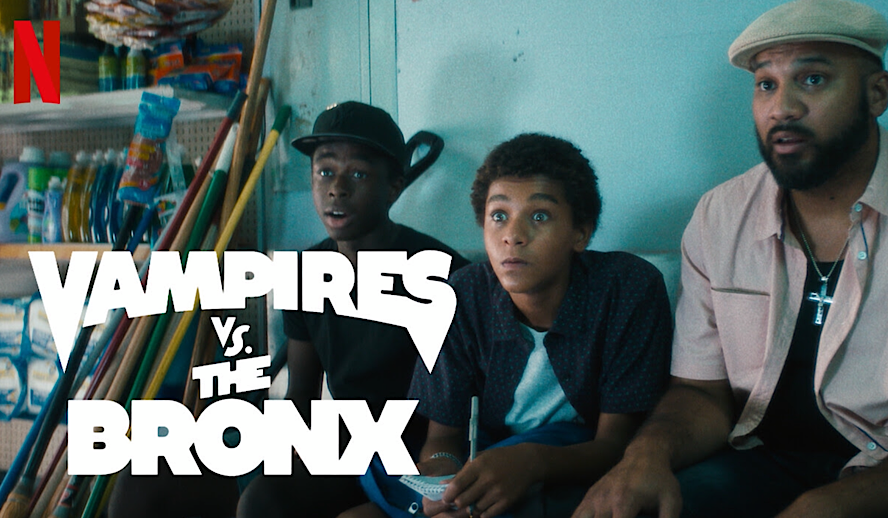 Photo: ‘Vampires vs the Bronx’/Netflix

When I say bloodsucking monsters who invade your home to drain your life force, the first and obvious thought is landlords and Real Estate proprietors. However, your second thought is probably vampires and Netflix’s latest original ‘Vampires vs the Bronx’ is here to give you a perfectly creepy dose of both, just in time for Halloween. Written and Directed by Oz Rodriguez, Vampires vs. the Bronx is a terrifyingly funny horror based around Miguel Martinez and the largely Dominican population of a block in the Bronx when they begin to experience some uninvited guests.

When local businesses begin closing down, all bought through an ominous and cookie-cutter real estate business named Murnau Properties, Miguel plans a neighborhood party to raise funds to save the local bodega. He never expects to find a slew of bloodsucking, wooden stake-fearing vampires behind the whole operation, determined to take hold of the Bronx for themselves and force the population of color out, once and for all.

Rodriguez does not shy away from the literal, in-your-face metaphor that the vampires represent the very serious issue of gentrification that is plaguing lower-income areas. People being priced out of the homes they have raised their children in, generations of families being forced to leave because a corporation wants to take advantage of low rent prices and “undiscovered” areas. Just as Christopher Columbus decided he discovered America, these companies discover a land that has been occupied by communities of often black and brown populations, an established culture and life, and bid them an unapologetic farewell. This film is a bucket of cold water to the face, a blaring wake-up call wrapped in a heartfelt bundle of comradery.

There is a warm feeling of coming home that is attached to this film, due to Rodriguez’s excellent writing that is more laugh-out-loud than scream-in-terror. Characters hang out of windows to call messages to family members, young boys try to wheedle in the pretty group of older girls, everything is presented and tied with a worn, well-loved ribbon. Often horror movies lack the moments that help the audience feel attached to the main characters and the world they live in, causing the fatal lack of care when something tragic happens and the villains appear, but Vampires Vs. The Bronx avoids this altogether. On top of the harmony this film brings, it utilizes the IT (by Stephen King) factor. Give me a group of loveable kids tasked with fighting an immortal being and absolutely no harm can be done. With writing and storyline as intriguing as this, this writer would like to see the boys of the Bronx fight all types of mythical beasts- Zombies Vs. The Bronx has a nice ring to it, right?

A stand out narrative tactic written by Rodriguez is Gloria and her live streaming content as she details the events to her adoring followers. Armed with a selfie stick and an Instagram following, Gloria is a modern-day Shakespearean chorus except with superior jokes, filling in the audience as the events begin to close around our group of young heroes. Played by Imani Lewis, her subtle yet genius addition to the film truly added to the feeling of audience acceptance in the community.

A Fresh Cast of Characters

The stronghold of characters is led brazenly by Jaden Michael who plays Miguel Martinez, Gerald W. Jones III as Bobby Carter, and Gregory Diaz IV as Luis Acosta. All three young men bring fresh-faced performances that justify their simple humor and childhood struggles but bring a quick edge of disparity and wit to the otherwise entirely adult cast. Jaden Michael embodies your traditional hero to root for, from his occasionally dorky “Aww, my mom says I gotta be home by seven” attitude to the heroically wild acts of bravery. Gregory Dias IV knows how to milk the audience for pity points with his nerdy disguise and seemingly ever-expanding knowledge of vampires, contrasted by Gerald W. Jones III’s struggle to remain a child as he tries to keep his family afloat, tempted to fall in with the dangerous drug-dealing crowd. Individually, these boys give a stand-out performance but united they truly shine.

Coco Jones, The Kid Metro, Chris Redd, and more delightful comedy actors fill out the cast and truly grasp the script for what it is, a comedic piece about the true meaning of home, and vampires. Coco Jones slips into the classic “cooler older kid joins in with the group of young heroes out of necessity and slight interest” role and it fits like a glove. Her mounting concern with vampires in their community when no one else seems to be taking it seriously is met with the priceless line, “We’re Haitian, man. My grandma’s been preparing me for this [vampires] my entire life.” As the kids’ father figure Tony, The Kid Metro gives an endearing and witty performance that will leave all viewers with a soft spot for the bodega man.

‘Vampires vs the Bronx’ Is A Must-See

In the end, there will never be enough feel-good movies starring young actors of color in genres they are almost invisible in. The horror industry has long-since used their black and brown characters as nothing more than bait for the killer, a one-liner joke slipped in before they were killed ruthlessly. Vampires Vs. The Bronx is a refreshing view on what it’s like when young boys of color take their destiny into their own hands, and kids their age will hopefully see them as someone to look up to. Oz Rodriguez has given us a delightful, outrageously funny film that is holiday-appropriate without being too outright terrifying and hopefully becomes a classic with age. Available on Netflix, Vampires Vs. The Bronx is one of the most creative and original pieces of kitschy horror to arise out of 2020, while audiences anxiously anticipate more from the talented Oz Rodriguez. Happy Halloween, and remember: “To all future invaders, you don’t want no smoke with the BX.”