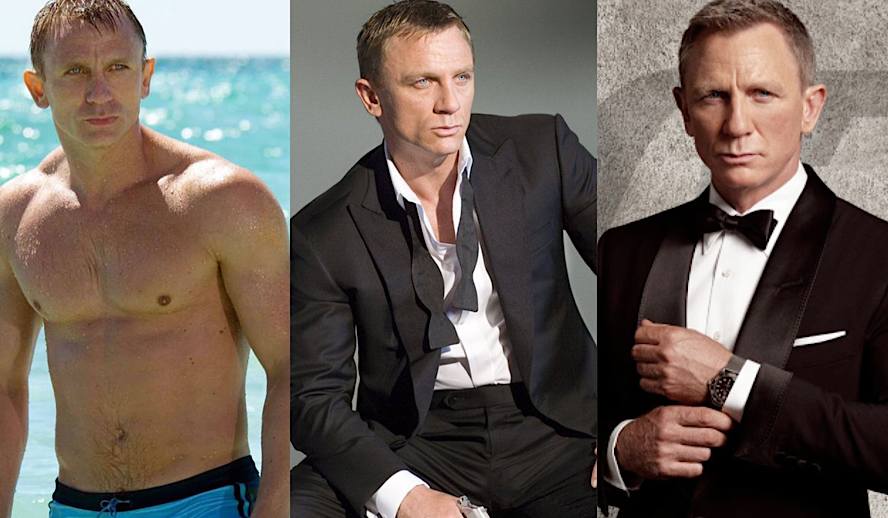 James Bond is one of the most recognizable characters in media history with dozens of films, comics, shows, and radio broadcasts dedicated to the covert British Intelligence officers’ escapades. Some of the most famous actors in the history of cinema have graced the silver screen under the moniker, “Bond, James Bond.” Sean Connery, Roger Moore, Timothy Dalton, Pierce Brosnan, and, most recently, Daniel Craig.

Craig has starred in five adaptations of 007, if you include ‘No Time to Die,’ dating all the way back to 2006 when Craig’s first portrayal, ‘Casino Royale’ was released. Following the massive success that was his first entry, Craig starred in 2008’s ‘Quantum of Solace,’ 2012’s ‘Skyfall,’ 2015’s ‘Spectre’ and the upcoming 2021 release, ‘No Time to Die.’ Daniel Craig is one of the most famous actors to assume the role of Bond (Outside Connery) with his films achieving an impressive level of success both critically and financially.

Related article: James Bond Books and Movies: The Evolution of our Favourite Spy Since Ian Fleming

Laying the ground rules: What metrics will we use for judgment?

Judging a film is a supremely subjective act and it is important to keep that in mind before beginning this experiment. What is represented as subjectively “good” here, may be your least favorite aspect of a film, character, situation, etc… This list is not the end all be all of “Daniel Craig Bond Ranked Lists,” so take solace (bad pun, I know) in the fact that this is just one interpretation out of the 7 some billion opinions on Earth. Your opinion is valid and is as equally as right as any opinion represented here. With that being said, let’s jump into the criteria.

For the sake of this experiment, we’re going to judge films based on the strengths and weaknesses of the films themselves and try to disregard any outside influences or biases we may hold. Cinematography, narrative strength, concept, quality of acting, mise en scene, etc… are all variables that we will consider while judging these pieces. Each film will receive a quick synopsis, then an overall review. After concluding the evaluations, then, the films will be ranked against one another.

Daniel Craig as Bond for the first time and boy, is it the perfect starting off point. Adapting the Ian Fleming novel of the same name, ‘Casino Royale’ follows James Bond after being promoted to the covert 00 status. After destroying a dirty banker’s (Mikkelsen’s Le Chiffre) prototype airplane in an attempt to gain information from a henchman, the banker is forced to organize an ultra-high stakes poker tournament to recoup his losses. Of course, Bond enters, and his attempt to thwart Le Chiffre’s efforts result in an action-packed, suspenseful, and thoroughly absorbing tale of love, murder, and betrayal.

The first of Craig’s films is one of the best overall Bond films ever made, regardless of leading man. Directed by Martin Campbell, ‘Casino Royale’ perfectly executes the archetypal construction of the Bond film with a unique mix of action, intelligence, and sex appeal. Eva Green as Vesper Lynd is one of my favorite Bond Girls, her nuance, motivation, and arc add a unique flair to the traditional Bond Girl ideal. Judi Dench as M and Mads Mikkelsen as Le Chiffre are fantastic, as always, especially the latter who perfectly captures the intensity and unbridled rage of his character so well.

The film has some endearing and emotional imagery and cinematography, most notable the shower scene between Bond and Vesper. The overall setting and idea, one huge gamble at a high roller card game, makes for the perfect landscape for Craig’s first Bond film. Not to mention, this script is tight. Every action is purposeful, every set-up has a well-timed and well executed pay-off, and the overarching structure and themes discussed are some of the most touching and enthralling within the Craig-Bond Universe. ‘Casino Royale’ is a modern action masterpiece and would certainly prove hard to top for the production studio.

The next entry would only take two years to release with ‘Quantum of Solace’ getting its wide release in 2008. A sequel to ‘Casino Royale,’ this film centers around Bond chasing down the dark and mysterious entity known as the “Quantum Organisation.” Bond teams up with Camilla Montes played by Olga Kurylenko to avenge the deaths they’ve suffered at the hands of the mysterious group. The two then are led on a hunt for the enigmatic Dominic Green played by Mathieu Amalric who is fronting as an “environmental entrepreneur” with true hopes of stealing access to land rights of a South American country.

‘Quantum of Solace’ is a solid entry to the Bond franchise, albeit a bit of a let-down. Well-acted, with some really beautiful cinematography, and has the insane scale we’ve come to expect from James Bond, however, it’s far from perfect. This film was produced during the writers’ strike of 2008 and it really shows. The film meanders, moving from one massive action set piece to another, never really finding its footing. The film also has some absolutely dreadful editing, plagued by the late 2000s fast-paced editing style of quick cuts which makes the visuals almost unreadable. ‘Quantum of Solace’ is a good film, but it has a number of issues that prevent it from achieving anywhere near the success of its predecessor

Sam Mendes, the acclaimed director of ‘1917’ directs the third Craig entry known as 2012’s ‘Skyfall.’ When MI6, itself, is attacked who is there to protect it? Well, James Bond, of course. When Gareth Mallory, played by Ralph Fiennes, forces M out of power, she is forced to turn to Bond to hunt down the attackers and snuff out the threat. The pair team up to battle Javier Bardem’s Raoul Silva on Bond’s home turf with the help of some unlikely allies.

Director Sam Mendes, in a stroke of genius, was paired with cinematographer Roger Deakins. Deakins, the cinematographer responsible for ‘Blade Runner 2049,’ ‘1917,’ ‘No Country for Old Men,’ and ‘Fargo,’ results in some absolutely astounding shots in ‘Skyfall.’ The film’s entire third act takes place in Bond’s hometown in the Scottish Highlands, allowing Deakins to illuminate some breathtaking landscapes, moods, and compositions. The script for this film takes a page out of ‘Casino Royale’s’ book, opting for the more traditional three-act structure. This allows Craig and Dench to play off each other with some great banter and dialogue. Judy Dench is great in her expanded role, as is villain Javier Bardem who shines in the final 20 minutes of the film.

In a bit of a derivative turn, ‘Spectre’ has Bond exploring a new evil organization known only as “Spectre,” while Mallory, the new M, battles against the political forces plotting against MI6. Blofeld, the leader of Spectre played by Christoph Waltz, hopes to eliminate Bond because of their past relationships with their mutual paternal figure.

Again, directed by Sam Mendes, ‘Spectre’ lacks severely in the narrative aspect, drudging up an unnecessary glimpse into both Bond and our main villains’ backstories instead of staying true to what makes the Bond franchise unique. The film focuses a huge amount of time on exploring this relationship, along with a number of strange twists and turns that really make you scratch your head. A bit narratively jumbled and, dare I say boring, ‘Spectre’ was actually painful to sit through on initial watch.

Obviously, this film has not yet been released so I cannot review it or even give my synopsis of the plot, so I will provide the Letterboxd synopsis:

“Bond has left active service and is enjoying a tranquil life in Jamaica. His peace is short-lived when his old friend Felix Leiter from the CIA turns up asking for help. The mission to rescue a kidnapped scientist turns out to be far more treacherous than expected, leading Bond onto the trail of a mysterious villain armed with dangerous new technology.”

We will start from the bottom and work our way up to the top, in ascending order.

Related article: Video: BONUS FOOTAGE – Every James Bond Opening Sequence Compilation From 1962-2020 While Waiting for ‘No Time To Die’ Release

It will be a fun exercise when we are privileged to see ‘No Time to Die’ and get to revisit these rankings and move them about with the context of the newest entry. I have some high hopes for the film, as it will be Craig’s final time reprising the role of James Bond, passing the moniker onto a new star (Idris Elba, maybe?) and it would serve the franchise well to send Craig out on a high note. It’s been a pleasure to watch this franchise grow and evolve over time and I cannot wait to reorder these five entries when we get the penultimate finale to Daniel Craig’s James Bond.