James Bond Books and Movies: The Evolution of our Favourite Spy Since Ian Fleming 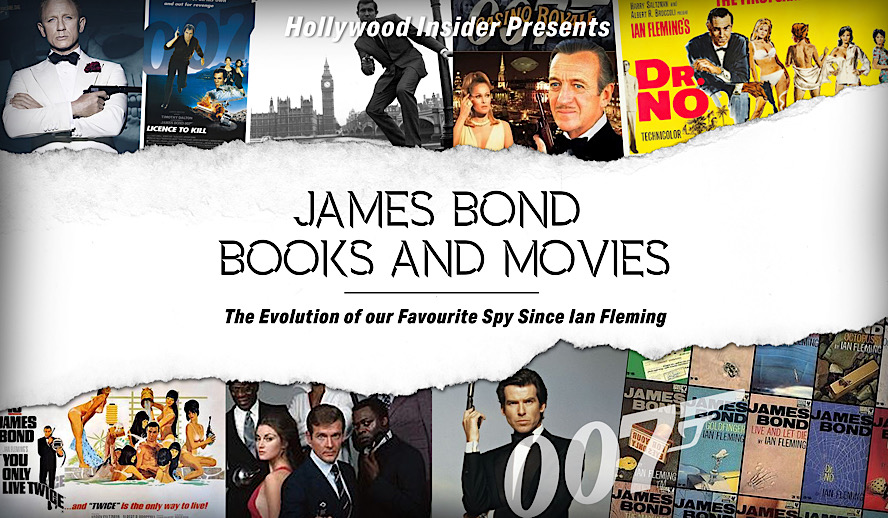 Ian Fleming, the author who created James Bond, was born in London, England, in 1908. He came from a wealthy background and studied in England, Germany, and Switzerland. Fleming went on to be a journalist in Moscow,  a banker, and a stockbroker before joining the British Royal Navy. Fleming rose through the ranks in Naval Intelligence, and it was through his assignments on the job and the travel required that he cultivated the detail and description for the adventures in his novels.

During the war, Fleming went on assignment in Jamaica, where he investigated U-boat activities in the Caribbean. He fell in love with the area and later bought land and built his home, Goldeneye, where he planned to write novels and enjoy his time in the sun. The first James Bond novel, Casino Royale, was written after the war, at Goldeneye, in the time before his looming nuptials. It came out in 1953 to much acclaim and success. Fleming would return to Goldeneye every year for two months to continue writing James Bond stories.

In 1954, an adaptation of Casino Royale was made by CBS for television. This was the first attempt to put James Bond on screen, but the transition didn’t stick until the 60s. Producers Albert R. Broccoli and Harry Saltzman worked on bringing the best version of Bond to film. The deal brokered with Broccoli and Saltzman led to the first Bond film, Dr. No, being shot in 1962. The film, with the late Sean Connery as Bond and Ursula Andress as Honey Rider, was a huge success and spurred the longest-running and one of the most successful film franchises in movie history. By 1962, Fleming had already published nine Bond novels and one short story collection. Fleming would go on to publish two more Bond novels in his lifetime. Fleming died in 1964 at the age of 56. One more novel and a collection of short stories about his secret agent were published posthumously.

At the time of Fleming’s death, only two films had been released, but he did have involvement with Goldfinger before its release. For those that have been counting, there were twelve original Bond books and two collections of short stories. The short stories were written by Fleming add up to nine tales of 007. Until Licence to Kill, all of the Bond films shared a title with Fleming’s novels. While some Bond films have nods to the short stories, others do not have any relations to Fleming’s originals.

There are a handful of Bond films that are not based on Fleming’s novels. After Fleming’s death, the tales of Bond continued through various authors. Over 24 additional books were written in the world of 007. There is also a series, Young Bond, that recounts James’s life before his involvement with British Intelligence. The series is based on the background given on Bond’s life in You Only Live Twice and elements from Fleming’s own youth.

With 24 Bond films produced by EON Productions and distributed by United Artists and MGM, the movies have had to move on from the groundwork Fleming laid at times. Examples of this can be seen from the entire run of Pierce Brosnan’s Bond films. GoldenEye, Tomorrow Never Dies, The World is Not Enough, and Die Another Day are all original screenplays that were later novelized. The series needed new ideas after one of the longest breaks between Bond films.

One thing that should not be overlooked when discussing Fleming and Bond is the aspects of womanizing and racism in the novels and films. Whether or not the intention was there, these elements are clear to see in many of the novels and a number of films. An article in The Guardian discusses the scenes in the movies that depict racist or sexist and misogynistic behavior. A Time article discusses these roots from the books.

In GoldenEye, Judi Dench’s M has the line, “I think you’re a sexist, misogynist dinosaur.” These are accurate words to describe the depiction of Bond in books and films. While there is still controversy in some of the recent movies, there are signs of advancement for the character that brings Bond into the 21st century. An example of this is the exchange between Daniel Craig’s 007 and Javier Bardem’s Silva in Skyfall hinting at a past of gay relations for the British agent. Another can be the prominent role of a female double 0 agent played by Lashana Lynch in the latest outing of Bond.

Hopefully, more inclusion and modernity in the newer Bond films show some promise for moving forward.

What’s Next for Bond?

No Time to Die is the 25th Bond film and will be Daniel Craig’s last outing as 007. There is much speculation for who will be the next actor to portray the British spy with a license to kill. But before that happens, No Time to Die will see its screen debut. The film has already been pushed back over a year due to the impact of COVID, and the latest release date of April 2021 could still be pushed back further.

Regardless of when it debuts, Craig’s last outing will mark the end of an era in the Bond franchise. It does so with many nods to the original novels and tips for the future. A female double 0 with a prominent role is a much-needed addition to the canon of the series. And in a tip of the hat to fans of the novels, Bond’s companion Felix Leiter will have another appearance in the Craig series. Also, it will be interesting to see how significant a role Christoph Waltz’s Blofeld plays in the film. While his story so far has veered from the books, it seems to be in line with the novels in terms of three appearances for the villain.

As for what’s left for the story of Bond, there is much to pull from the originals and the continuation novels. In the originals, Bond was married and later had a child. This could be something that is utilized in future films, but, similar to the Brosnan films, the franchise could move ahead into uncharted territory.

Whether the Bond films after Craig go back to the original source or take a new path in the legacy, fans will be eager to see what happens next.