10 Great Movie Villains: These Iconic Antagonists Have Left a Lasting Mark on Cinema 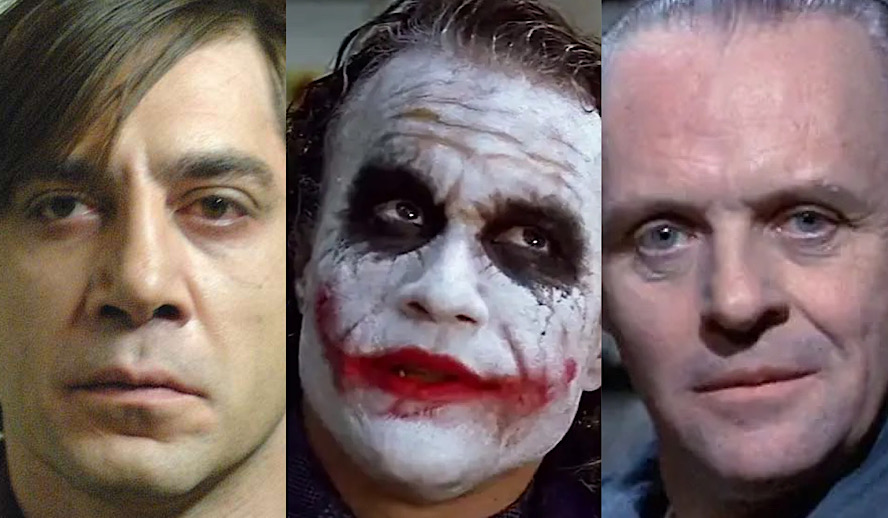 Ever heard the saying “A film is only as good as its villain”? In the case of the names I’m about to rank, this is certainly true. Whether psychopathic or cruelly methodical, these iconic antagonists have left a lasting mark on cinema through their outstanding achievements in villainy.

The sin-obsessed serial killer in ‘Seven’ is terrifying. He is completely unafraid to harm himself in pursuit of his goal (he cuts his fingerprints off to avoid identification). The kills he deals out are shockingly brutal. Most notably, John Doe is responsible for one of the cruelest, most memorable twists in cinematic history. Once you find out what’s in the box you’ll likely feel queasy. Doe is a great villain because he arguably wins in the end. His success, and the film’s pessimism, are predicated on this victory – he completely schools the detectives trying to stop him. Chilling stuff.

Related article: Hero Or Villain Paradox?: When You’re Young, You Love The Hero, and When You’re Old, You Understand The Villain

Related article: Top 10 Disney Villains: Who Makes it to Number One? Is it Scar? Jafar? Hook?

Baby Jane Hudson is a failed child actress who torments her disabled, more successful sister Blanche (Joan Crawford) in a Hollywood mansion. She is a cruel villain – the familial element makes her abuse doubly upsetting because you really get the sense that she fundamentally hates Blanche. She works as a villain because her origin is totally believable (I’m sure we can all think of various tormented child stars at the drop of a hat). Davis completely sells the fact that her growth has been distorted. Her disturbingly childish demeanour is horrifying. Despite being completely believable, her villainy exists thoroughly in the realm of Horror – Baby Jane’s antagonism gives ‘Whatever Happened To Baby Jane’ a palpable sense of discomfort.

Frank Booth is a nasty criminal who torments nightclub singer Dorothy Vallens (Isabella Rossellini). Frank brilliantly rides the line between pitch-black comedy and pure terror – this is especially evident in his first scene, and the rest of the film for that matter. If you like your villains to yell lines like “baby wants to fuck” before furiously inhaling unknown substances, Frank Booth is the bad guy for you. In many ways Frank is a hugely overcooked character, but he remains frightening because he is believable – his perverted approach to sexuality is insane, but it is rooted in reality. This unique vision of terror is something only Dennis Hopper could have pulled off this well – it is both entertaining and deeply uncomfortable to sit through.

‘Avengers: Infinity War’ was a game-changer for various reasons. Most notably, for the first time ever, a Marvel supervillain was genuinely threatening. Most supervillains come across as generic, world-conquering wannabes the audience know will be defeated. However, Thanos is far from this. Thanos talks the talk and walks the walk. You believe that he will carry out his plan of world-domination, and you fear for the main characters when they share screen time with him. Additionally, his plan is understandable from a psychological perspective. The film makes more of an attempt than previous entries to explain his motivations, which even makes him empathetic in some moments. Four years after the fact, it is clear that Thanos will remain an iconic villain for years to come.

The first scene of ‘Inglourious Basterds’ is one of the most brilliantly tense scenes out there, so for this alone Landa arguably deserves his place. Christoph Waltz’s Oscar-winning performance is fantastic from the get-go. Few actors can pull off evil concealed by devilish, performative charm as well as Waltz. Landa’s dialogue is so well written by Tarantino – his linguistic ability is his weapon. He speaks three languages throughout the film and is equally successful in each at cornering people into life-threatening situations. Every time he begins to interrogate someone, the audience suspects he knows something we don’t and is about to exact brutal punishment. Landa meets a deliciously violent end, but it doesn’t eclipse the villainy he deals out before it.

A villain we love to hate, Nurse Ratched’s callous approach towards medicine generates a genuine sense of frustration throughout ‘One Flew Over The Cuckoo’s Nest’. She is cold yet infused with an irritating veneer of kindness. Throughout the story, this pretense is increasingly unraveled, and her psychopathic nature revealed. Like the best villains, Ratched’s grasp over the protagonist is powerful – she has the upper hand throughout. In terms of purely hateable villains, she is difficult to beat.

‘Star Wars’’ Darth Vader is probably the coolest villain on this list – the mixture of James Earl Jones’ voice and the suit is iconic. Vader is in complete control whenever he is in a scene. He is responsible for some of the most quotable lines in movie history – people have been repeating “I am your father” for decades. The reason I chose ‘The Empire Strikes Back’ as the definitive Vader entry is that he is much more threatening here than in any other film – in ‘Star Wars’ he is slightly too goofy and he isn’t exactly villainous in Return (though his character reaches a poignant end). Darth Vader is, to many, the ultimate villain. He certainly tops the list in regards to coolness and iconography.

Cannibal Hannibal. Dr. Lecter has a horrifyingly paradoxical profile: A psychiatrist who eats people. Hopkins’ unflinching, no-blinking performance is unbelievably intense. Lecter is weirdly charming, which means that when he lets loose it’s still shocking even though you’ve been made aware of the threat he carries. The scene with the policemen in the cell is hauntingly vicious. What makes the film and Lecter interesting is that he isn’t even the main villain. In fact, the film pits him and our hero Clarice on the same team, and the two have a fascinating relationship. Lecter could have been a more conventional villain but he becomes so much more.

Anton Chigurgh is one of the most psychopathic killers on a list full of them. Chigurgh’s approach to murder is near comedic in its disinterestedness. He kills people as nonchalantly as one would an ant. His external appearance corresponds exactly to his internal being – his strange air-sucking weapon and even stranger haircut tell you everything you need to know. He is as terrifying as he is fascinating – his code is unbelievably brutal, yet so consistent within itself. A part of you can’t help but respect the dedication it takes him to construct his worldview so carefully. Every time he interacts with someone, their death seems certain. The sustained tension he creates and the devastating blow he lands on the rest of the characters ensures he earns the second spot on this list.

I would put forward Heath Ledger’s performance in ‘The Dark Knight’ as one of the best screen performances of all time. He is completely unrecognisable as The Joker, utterly convincing despite the lunacy of the character. It never feels like he is trying to be crazy, he is completely natural. Like many of the villains on this list Ledger’s Joker is notable because he permanently damages the heroes in the story – Gotham is never the same once his dastardly work is done.

Just like Chigurgh, his presence incites a strange blend of dark comedy and terror – the main difference between the two is that Ledger’s Joker doesn’t even have a code. It is difficult to create a villain who is frightening and believable despite having little motivation beyond wanting “chaos”. The Nolan brothers and David S. Goyer deserve a lot of credit for bringing him to life – a criticism that annoys me is that the success of the character owes purely to Ledger’s performance. That being said, a huge amount of credit must go (and rightfully has done) to Ledger for bringing the Joker to life so magnificently.