Netflix’s ‘Carnaval’: This Brazilian Film is Endearing, Still Not Enough To Influence 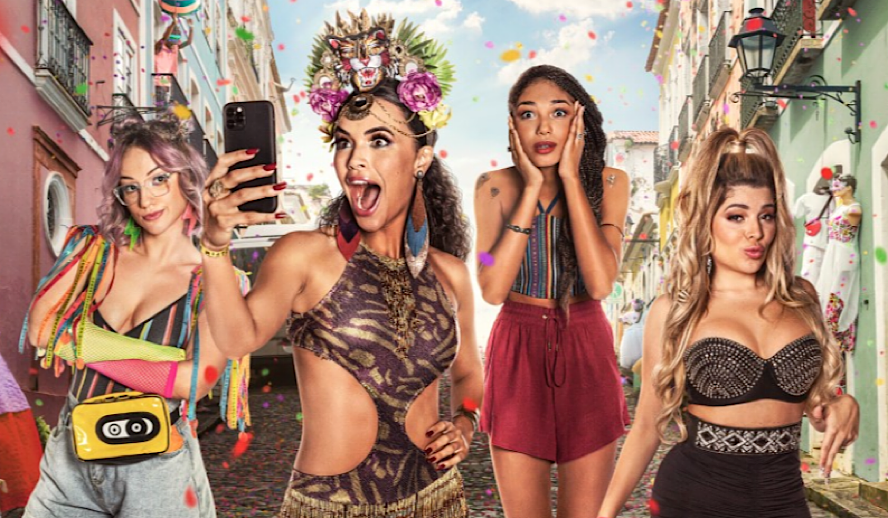 A Trip To Carnival

From filmmaker Leandro Neri comes Netflix’s new Brazilian romantic comedy, ‘Carnaval’. The film follows social media influencer Nina who, after a breakup, takes her three friends, Mayra, Michelle, and Vivi, on a free trip to Bahia’s vibrant and exciting Carnival. The group of friends is portrayed by Giovana Cordeiro, Bruna Inocencio, Gessica Kayane, and Samya Pascotto. Over the course of the trip, Nina begins to learn the true meaning of life beyond the social media rat race.

‘Carnaval’ is a film that is incredibly inconsistent in its construction. At points it tackles real, relevant issues but struggles to convey and expound on them in a mature way, falling into the trap of cliches and tropes. The film is clear in what it wants to be and achieve, transparently articulating a message to its audience. Unfortunately, while the message is clearly received, the delivery feels incredibly clumsy which undercuts the emotional impact that the film could have punched. While there is certainly an audience for this film, that audience was not me which left me feeling underwhelmed as the credits rolled.

Starting with the strengths of the film, ‘Carnaval’ has a lightning-quick pace to it — from the opening sequence of the film, the editing is quick and efficient which allows for a very smooth watch. This fast pace also plays into the tone of the film; the film feels very stylistically similar to that of an early to mid-2000s romantic comedy in the vein of ‘Sex and the City’ starring Sarah Jessica Parker or the more recent ‘Girls Trip’ starring Regina Hall, Tiffany Haddish, Jada Pinkett Smith, and Queen Latifah. Specifically, it feels very similar to that of ‘Sex and the City 2’ where we have dropped our group of characters into a foreign country on an all-expense-paid trip except this film opts to add in a modern twist of the reason for our characters journey: a festival of social media influencers.

While at times a little too over the top, I did like the tongue-in-cheek aspects of this social media influencer extravaganza. The film clearly understands the satire it is trying to create in this world of desperation for likes and follows amongst the characters of the film which does work conceptually. The ‘Sex and the City’ comparison for ‘Carnaval’ comes with both all the positives and negatives attributed. The characters of the film, specifically the protagonists, are very well characterized. The opening sequence of the film quickly and effectively conveys who each of these four women is and what they value which sets them all up for their respective character arcs.

The dynamic between the four is also quickly established and believable, it is easy to understand why these four are friends and how they have supported each other. From the perspective of creating what feels like real friendships, the writing does a good job for the film. The production and costume design for the film is another positive. The film does a good job at creating a culturally authentic production design best I could tell which was another appreciated bonus. This praise also applies to that of the soundtrack and score.

Unfortunately, ‘Carnaval’ is an incredibly conventional film. The general plotline and specific character arcs are very generic and have been done a thousand times over which makes a lot of them fall flat. Giving each of the characters a more unique arc could have led to a more satisfying conclusion for each of them. The overall writing of the film seems to struggle to balance tongue-in-cheek with camp and for the most part, falls into the campy tropes that it plays with. Consistently, it felt that some of the early 2000s camp was so blatant that I questioned whether the film was intending to be meta about it and unfortunately never got a distinct answer by the end of the film.

As previously stated, the film takes a stance on the values of the main characters and their obsession with social media, but the film almost betrays this stance. The film attempts to condemn the shallowness of these social media influencers but does so in a film that inherently feels shallow with the film’s large crowd party montages that have shots linger on the women dancing by the pool in their swimwear. It all just felt very scatterbrained when on one hand it’s trying to empower its main characters and then on the other objectifies characters of lesser importance which, as an audience member, became very frustrating. While I credit the filmmakers for attacking this admittedly interesting subject, I felt as though it could’ve been attacked in a more mature way.

‘Carnaval’ seems to have some ebbs and flows when it comes to its technical prowess. The cinematography of the film is mostly well done except for a few lapses when it comes to spatial awareness. At times when our characters enter a new space, there is not an establishing shot to help the audience gauge the sense of space of the area which would have allowed for a better viewing experience. In comparison, the montage sequences, specifically the ones at the carnival, are very well shot and edited together and give a great sense of space which made the other scenes’ space issues even odder and out of place. This isn’t a huge issue for the film but is one worth mentioning.

‘Carnaval’ is a film that, unfortunately, did disappoint me. While the character and performances are endearing, the overall concept and execution of the point of the film left me wanting more. The film felt like it betrayed itself at points, which is a shame because there was something interesting at the core of what the filmmakers were trying to say. Perhaps the whole film was a commentary on shallow media and it just went over my head, but from my perspective, it just did not dive deep enough into the issues it tackled.

Like I said before, there is an audience for this film, it’s just not for me. While I personally cannot recommend it, it is an easy and relatively fun watch. If that’s up your alley and you already have a Netflix subscription, give it a watch. Unfortunately for me, I do not see myself revisiting the film any time soon.

Check out ‘Carnaval’ on Netflix today. Be on the lookout for Netflix’s next original film ‘Awake’ starring Gina Rodriguez and Barry Pepper releasing on June 9th.