A Retrospective on Tom Hanks’ ‘The Green Mile’: 2021 Lens on Portrayal of Jim Crow South and American Justice System 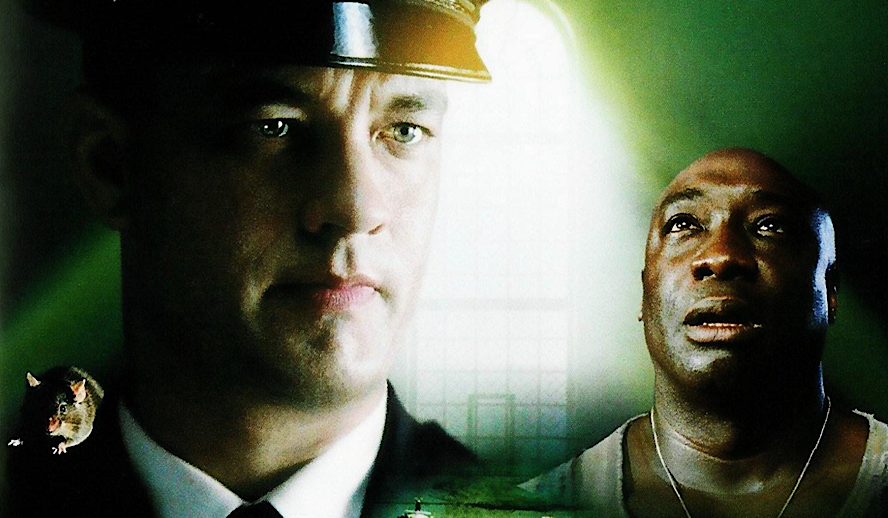 There’s no shortage of Christ figures in cinema–Superman, ’Cool Hand Luke’, Neo from ‘The Matrix’.

And yet, John Coffey from ‘The Green Mile’, incomparably portrayed by the late Michael Clarke Duncan, stands comfortably among them–gifted with the mystical power of imbuing life at the expense of his own health, he not-so-subtly embodies the sacrifice of Jesus Christ.

What differentiates ‘The Green Mile’, however, is that Coffey isn’t the star–his executioners are. The electric chair serves as a Great Depression-era cross, and Tom Hanks’ Paul Edgecomb, a correctional supervisor at Cold Mountain Penitentiary’s death row (“The Green Mile”), is the Roman centurion tasked with overseeing his execution–”Surely this man was the Son of God!” Hell, the electrode headpiece is a crown of thorns–and don’t forget the initials (J. C.).

Related article: EVOLUTION: Every Tom Hanks Role From 1980 to 2021, All Performances Exceptionally Poignant

The Story of George Stinney

For those unfamiliar, the story is set in Louisiana, 1935–Coffey, a hulking Black man with a sweet, childlike demeanor, is wrongfully convicted of raping and murdering two young White girls. Based on Stephen King’s eponymous novel of the same name, it combines elements of classic Depression-era literature like ‘To Kill a Mockingbird’ and ‘Of Mice and Men’–but it really brings to mind the story of George Stinney, a 14-year-old Black boy in South Carolina who was executed by electric chair on June 16, 1944.

Interrogated without the presence of his parents or legal representation, he was convicted of murdering two young White girls by an all-White jury that deliberated for less than ten minutes. Stinney’s arresting officer, H.S. Newman, claimed that the boy confessed, though no signed confession is known to exist–Stinney later claimed that his arresting officers had starved him and used food to extract a confession. As he was too short to properly fit in the electric chair, a Bible was used as a booster. His conviction was overturned in 2014–good for the record, but far too little, too late.

‘The Green Mile’ approaches this weighty subject matter from the perspective of a White protagonist, bringing to mind the now-diminishing tendency by Hollywood to tell stories of POC through the lens of a “White savior”–’The Green Mile’, to its great credit, subverts this distasteful trope. Edgecomb finds no redemption–he carries out the execution, in spite of his deep personal objections, to the letter of the law. As an old man, he realizes that Coffey had inadvertently gifted him with an abnormally long life–he wonders if it’s a curse, however, as he outlives everybody he’s ever known and loved (except for the mouse Mr. Jingles).

Nevertheless, ‘The Green Mile’ exemplifies the outdated ideals of “a few good apples”–insulated by the prison walls, Edgecomb and his story exist outside the realities of the Jim Crow South and the Great Depression. The only character who uses the N-word is the utterly detestable William “Wild Bill” Wharton (played masterfully by Sam Rockwell), a cinematic and literary trope that clearly separates the “good” White folk from the racist ones.

As prison guards, Edgecomb and his trusted officers, Brutus “Brutal” Howell (David Morse) and Dean Stanton (Barry Pepper, who served under Tom Hanks as a muttering deadshot sniper in ‘Saving Private Ryan’), are utterly noble–that is, until Wild Bill starts giving them a hard time. His repulsive behavior justifies a ‘Rambo’-style hosing, perhaps serving as literary punishment for his racism, but it doesn’t quite hold up under modern scrutiny–at least, not if the protagonists are presented as righteous.

Frank Darabont’s direction suggests as much, and he encroaches on the maudlin as the story comes to its inevitable conclusion–still, it endures because it’s so damn effective. There’s few images as wrenching as Coffey watching a movie for the first time–’Cheek to Cheek’, from Fred Astaire’s ‘Top Hat’. As a fixture of the Depression, Astaire is often referenced in works set in the era–Woody Allen’s ‘The Purple Rose of Cairo’, for instance, as well as Steve Martin’s overlooked 1981 musical ‘Pennies from Heaven’ (the latter of which Astaire himself not only lived to see, but hated for its cynicism).

‘The Green Mile’ has some outdated sensibilities, but it has a good heart–and that’s what counts. Clocking in at over three hours in length, it’s an epic drama with the usual breadth of what Lisa Schwarzbaum aptly described as “King-size yarn spinning”–just look at the thickness of his novels.

That said, the viewing experience is hardly stale. As much as the film deals with the maddening and insurmountable injustice of a deeply flawed system, so is it carried by a marvelous sense of humor, personality, and intrigue that reminds us why there are so many Stephen King adaptations to begin with–Darabont is a heartfelt director in this regard, and he adapts the source material as masterfully as he’d done five years prior with ‘The Shawshank Redemption’, also originally written by King.

In addition, the roles are perfectly cast–Tom Hanks is perhaps the most suitable actor in the world to portray a decent man in an indecent world, and the weight of Michael Clarke Duncan’s performance need not be exaggerated. Sam Rockwell is consistently wonderful at being despicable, and the lesser-known Doug Hutchison does fantastic work as the sniveling, privileged sadist, Percy Wetmore–what he does to the condemned inmate Eduard Delacroix (Michael Jeter) remains one of the most excruciating scenes in cinema.