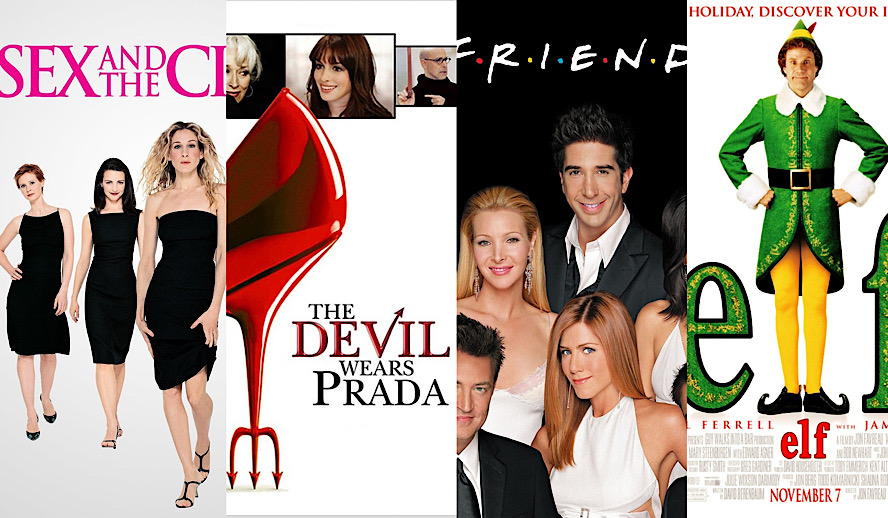 There is something about the lights, sounds, fashion, and air about New York that I can’t seem to find in any other city I visit. Unfortunately, I live on the opposing coast in the heart of Los Angeles and if hopping on a plane to the city that never sleeps isn’t in the cards for me, I usually turn to one of these shows or films to fulfill that sense of nostalgia I miss when I’ve been gone from NYC for too long. Here are my top ten films and television shows with the perfect amount of nostalgia to allow you to feel as though you are a born and raised New Yorker.

Inspired by the life of former editor-in-chief of Cosmopolitan magazine, Joanna Coles, Freeform’s ‘The Bold Type’ follows three young women who navigate working at a famous global women’s magazine. The trio explores love, friendship, and professionalism as they each work toward their dreams in one of the world’s most demanding cities. I love this series because of how accurately I feel it portrays the hustle to be successful in one of the toughest cities to crack. Considering the three leading ladies all work for a fashion magazine you can easily assume that the costuming on the show is to die for. Whenever I finish a new episode of this show I always long for a cozy apartment and a brand new wardrobe to accompany it, considering how glamorous and fast-paced this show is.

Sarah Jessica Parker leads this famous New York series as the confident and wide-eyed Carrie Bradshaw while she and her best friends navigate the city and their sex life along with the elite Manhattan manner of the ’90s. With big dreams and high fashion, these women take viewers through the city while Bradshaw tests her luck at the writing scene as a columnist. This series is perfect to pair with a glass of red wine after a long night when wanting to unwind while simultaneously wishing you could put on your best coat and heels for a night out in Manhattan.

To piggyback on the previous recommendation, ‘The Carrie Diaries’ was a CW television show starring Anna Sophia Robb and Austin Butler that served as a prequel to ‘Sex in the City’ which followed Carrie Bradshaw in high school in the ’80s. This show was fantastic not only for the amazing costume design and set decor but the characters were so likable as they navigated Manhattan during one of the most trying times of their lives.

Obviously, this may not be everyone’s cup of tea but if you can get past any insecurities you may have about binging six seasons of a CW show – I would wholeheartedly recommend ‘Gossip Girl’ to anyone who’s a fan of New York. The show centers around teenagers Blair Waldorf (Leighton Meester) and Serena Van der Woodsen (Blake Lively) alongside their extraordinarily privileged (and good-looking) friends living on the Upper East Side.

Their extravagant lives are filled with grandiose parties, high fashion, champagne problems, and a heavy load of drama considering a gossip blogger is documenting each and every move they make. With some of the most beautiful landscapes of NYC, this series is bound to give you a slight entail of what the privileged life of a successful Upper East Sider might look like.

An early 2000s classic starring Anne Hathaway and Meryl Streep, ‘The Devil Wears Prada’ tells the story of a fashion-less college graduate who in desperate need of a job lands the position of assistant to one of the highest and most notable executives to one of the worlds biggest fashion magazines. Knowing absolutely nothing about fashion, Hathaway’s character transforms from not to hot in this film regarding New York’s exquisite fashion and magazine scene.

This late 70’s film starring Meryl Streep, Mariel Hemingway, Diane Keaton, and Woody Allen who also directed and wrote the film is Allen’s love letter to New York City as an ensemble cast supports its title. The film focuses on each character’s storylines and how they intertwine with one another. With romantic cinematography, classic city lights, and effortless acting, this film is perfect to add to your NY nostalgia list.

This highly remarked Amazon Prime series takes place in the ’50s and ’60s and follows a New York housewife attempting to start her career as a stand-up comedian. A great thing about this show is that it is actually filmed in NYC often on-location where fans and tourists can often spot the filming locations unlike ‘Friends’ for example that was filmed on a soundstage rather in Los Angeles. The costuming and comedy alone are enough to want you to start binging this series and it is a major must-see for any fan of old-fashioned New York.

I’m sure at this point nearly everyone has seen this classic Christmas movie, and if you haven’t I recommend you drop everything you’re doing despite the fact it is nearly summer and watch this hilarious Will Ferrell film as soon as humanly possible. This film centers around Buddy the elf who travels from the quaint North pole to the hustle and bustle of New York City in attempts to meet his birth dad who doesn’t exactly know Buddy was ever born in the first place. While ridiculously hilarious, this film showcases some of NYC’s most monumental landmarks such as Central Park, the Empire State Building, and the Rockefeller Center’s ice rink. While NYC is magical in itself, there is something about the city during Christmas time that makes this city even more enticing.

This television series is obviously the first to come to mind. Running a total of ten seasons it follows an eclectic ensemble cast in their twenties living in Manhattan. The group often frequents their local coffee shop, Central Perk, where they recount their current romances, drama, life struggles, and so forth. This was one of the first shows I remember watching that made me want to travel to New York. There was something so special about the camaraderie and coziness of their neighborhood coffee shop that I was desperate to experience it for myself.