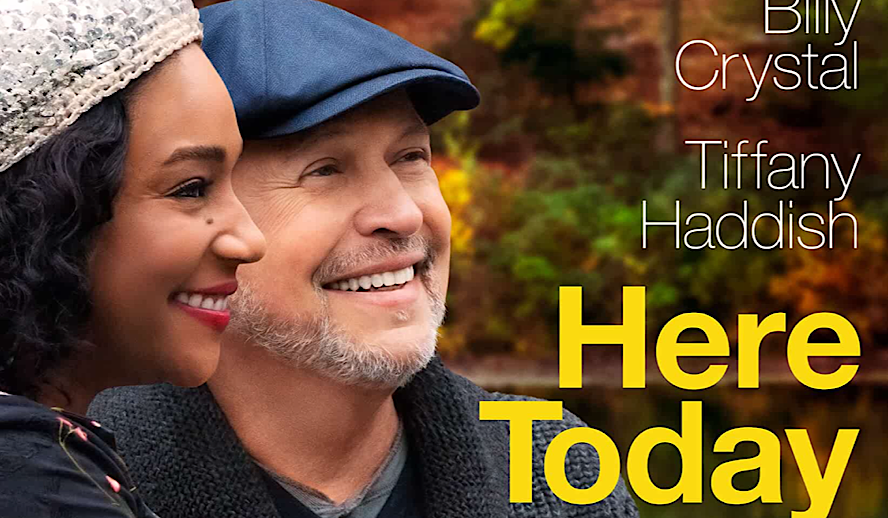 Stars of The Past, Meet Stars of Today

Production companies; Face Productions, Astute Films, and Big Head Productions, bring you  Billy Crystal and Tiffany Haddish joined together in the movie ‘Here Today’. This film creates a unique pairing in a somewhat unique, yet familiar storyline. Rather than the usual romantic comedy, where these types of movies are categorized, it was a movie about a growing friendship between an unusual partnering. Billy Crystal is most known for his voice work as the one-eyed monster, Mike Wazowski, in Pixar’s, ‘Monster’s Inc’ and ‘Monster’s University’.

Crystal is also known for his involvement in ‘Saturday Night Live’ sketches from 1948 through 2015. Tiffany Haddish is best known for her breakout role as Dina, in the 2017 female-led comedy film, ‘Girls Trip’. She is also known for taking another trip for her role as, Trina, in the 2021 prank comedy film, ‘Bad Trip’. Not only do Billy Crystal and Tiffany Haddish star in this film, but they are also two of the nine producers of the project, with Billy Crystal also being a director. The film features talent from other big stars such as Netflix’s, ‘You’ and The CW’s ‘Gossip Girl’ star, Penn Badgley, and Tony Award-winning musical star, Alex Brightman.

Related article: Hollywood Powerhouses Stand Up Against HFPA Due to Continued Racism and Sexism

Related article: The Rebirth of ‘West Side Story’: The Blockbuster-Maker Steven Spielberg Making A Classic Bigger and Better

The film was released in theaters on May 7th, 2021, and has already received a lot of pretty decent reviews. Overall critics gave this film an average of three to four stars out of five. Many people felt that this film was a great way to talk about the difficult subject matter. Audiences are raving about the film being wickedly hilarious, with heartwarming and emotional moments. Some critics even say the complete opposite, with the film being poignant, with only bursts of funny moments. While there are aspects of these opinions I agree with, I don’t necessarily agree with all of them. I felt impressed with most elements in the film, while still wishing there were something more…or maybe even something different.

The film ‘Here Today’, is based on a short story by Alan Zweibel follows an old comedian, Charlie Burnz (Crystal), and a singer named Emma Payge (Haddish). They befriend each other, causing concern in those around them. They spend a ridiculously large amount of time in each other’s company and even stay the night with each other. The public begins to question if this platonic relationship is really something deeper than the surface. The film wants to challenge our ideas of what is an appropriate friendship or not, and to what extent does age matter in a platonic friendship. I also feel as though this film plays with the idea of soulmates, and what that idea really means. Do soulmates have to be romantic partners? Can your best friend be your soulmate? These are questions that the film presents to the viewers.

This film is honestly so refreshing in my opinion. I feel the world needs to see more representation like this in the media, and in Hollywood. Not only is there a significant age gap between the two pals, but they are of different races, and of different genders too. Although Hollywood likes to emphasize the whole, “two unlikely friends” trope, they typically hate to see two of the opposite gender being in a friendship without any form of a love interest between them. Historically, films about love are the films that people often want to see. I feel like this film makes commentary on that, without being too explicit about it.

I have also been a fan of films that come with a meaningful message. This film discusses the uncertainty of life and the complications that elderly people may face. The film displays the effects of dementia, and how it doesn’t only affect the victim, but it affects their loved ones drastically.  I can feel myself wanting to refer to this film as a romantic comedy, and I know that I cannot. That is the beauty within a film such as this. It forces you to unlearn a lot of what you are used to seeing. This film has the formula of a romantic comedy, but it is more of a friendship comedy or a relationship comedy. Let’s call it that. A relationship comedy.

My personal opinion of the film was that it was enjoyable, and I obviously appreciated the message it was trying to convey to its viewers. It was not the best film I’ve seen this year, but it wasn’t the worst either. It just simply okay. That’s not necessarily a bad thing with it comes to relationship comedy. I wouldn’t necessarily recommend audiences see this film with the urgency that I would recommend for other films or television shows. However, I would not deter anyone from watching this film either. There were funny moments, not hilarious, but funny. There were heartfelt moments, not too emotional, but touching. I would give this film a warm rating. I’m happy that I had the opportunity to see it, but I don’t think I would actively seek it out again.

I will acknowledge that the onscreen duo was powerful in their performances, with Tiffany Haddish doing surprisingly well in her serious moments, as her funny moments. I will also acknowledge the significance of the film’s title, ‘Here Today’ as it relates to the popular phrase, “Here today, gone tomorrow.” You have to live your life to the fullest because you never know when your time is going to be up. Life is the most unpredictable force in the entire world. Most people believe we get only one life. This film pushes the message of laughing, loving, and living.

Be who you want to be. Do whatever it is you want to do. Most importantly, make friends with everyone you meet. You would be surprised with who you end up making a long-lasting connection with. Pursue those relationships, regardless of how the world finds it to be unusual. Cherish your own happiness and, because those are all you have…and one day you may even lose those. I appreciate the importance of this message, so I see and understand the internal value and the external market in a film like this one.