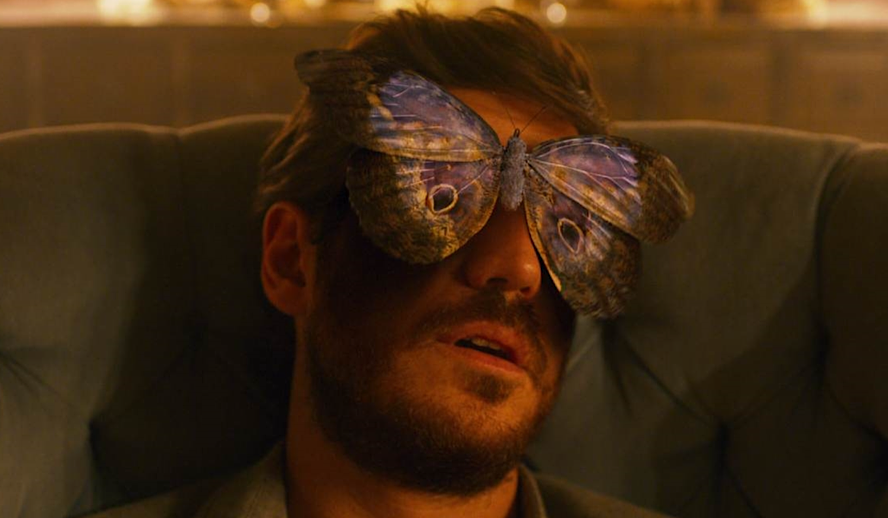 The last decade has seen a resurgence in fairytale narratives – and not just the live-action, Disney-flavoured kind. The culture saw a shift to darker interpretations of this folklore, with films such as, ‘Red Riding Hood’ (2011), ‘Snow White and the Huntsman’ (2012), and ‘Hansel & Gretel: Witch Hunters’ (2013). Television got in on this trend too, with the lighter fare of ABC’s ‘Once Upon a Time’ and the darker, police procedural ‘Grimm’, the latter of which traced fairytale creatures back to their European roots.

The invisible city of the title refers to the ancient culture and supernatural ‘entities’ that surround a Brazilian town. The series’ protagonist, Eric (Marco Pigossi) sets out on a journey to find the link between his wife’s death in a forest fire and a mysterious pink river dolphin that has washed up on the beach. Eric’s quest brings him into contact with multiple supernatural beings who still live in secret around the city, all drawn from the creatures of Brazilian mythology. These include a tapire-iauar (a kind of forest nymph), Saci (a mythical prankster), and the Cuca (a Brazilian version of the boogeyman). These entities serve as both friend and foe to Eric while he tunnels deeper into this magical underworld and its dark secrets.

These entities have been around far longer than modern man, and the show uses this to its advantage when showcasing the environmental themes. The series begins with an encounter with the mythical Curupira, who is explained to only attack “those who destroy the forests and harm the animals.” Curupira has not been seen in many years, as “The city got bigger, the forest got smaller.” The fact that this forest-protector is later found living amongst piles of garbage while clothed in plastic isn’t subtle, but it is powerful.

With only seven episodes, the show quickly establishes its ensemble. The mystery mostly centers on Eric, but we spend plenty of time with the mythical crew as well. Inês (Alessandra Negrini) is the de facto leader of the other key entities, including Camila (Jéssica Córes) who becomes something of an ally to Eric, and Isac (Wesley Guimarães), who strikes up a rather charming friendship with Eric’s young daughter Luna (Manuele Dieguez). We alternate between this group and the human characters, including Eric’s partner Marcia (Áurea Maranhão) and the leader of a local environmental task force Ciço (José Dumont).

Each member of the talented cast breathes life and depth into their roles, and yet something is still missing. It’s not so much that the characters are poorly written or acted – quite the opposite – but rather that we don’t get to spend enough time with them. The greatest focus on relationships we receive is in the flashbacks between Eric and his recently deceased wife Gabriela (Julia Konrad), or between Eric and Luna, as the detective struggles to balance the ongoing caseload while caring for his daughter without his wife’s support. It’s a relatable struggle (supernatural creatures and murder investigations aside), but one we have seen before. It’s a little harsh to push Gabriela’s death into the ‘fridging’ category, as Konrad plays her beautifully and the flashbacks allow her to feel like a fleshed-out person as opposed to a mere motivator for Eric’s journey, but still, the ‘hero’s dead wife’ trope feels tired compared to the more complex and unique relationships in the show.

‘Invisible City’ is many things; it’s intriguing, unique, and a well-thought-out mystery by all involved. There just isn’t quite enough of it. Fantasy and supernatural shows are always difficult to introduce to audiences, whether they’re familiar with the folklore premise or not. On the one hand, it’s refreshing to be spared a ton of exposition. There’s no convenient ‘Book of Creatures’ for characters to read from, no moment where Eric is sat down while having the world explained to him piece by piece. Like Eric, we’re left to figure it out for ourselves. We are fed enough to follow the plot, but not enough to be fully invested (as the creators so clearly want us to be).

We won’t be giving away any spoilers here, but the pace at which the mystery unravels and the amount of time given to the Eric and Luna plotline doesn’t allow the audience much time to wonder, play detective or figure out the mystery themselves. We get a sense of all the entities and some of their powers, but never quite gain our footing with what the exact rules of this mystical world are. Some key relationships suffer here too. For example, there is much more to be mined from Eric and Marcia’s conflict; Eric is going against policy because he knows about the supernatural workings of the city, while Marcia is left to contemplate her partner’s strange behavior and whether or not to side with him. Camila is torn between her long-lasting loyalty to Inês and a new connection with Eric, but in the limited runtime, her conflict feels rushed and underdeveloped.

Overall, the show does all the right things. It has intriguing three-dimensional characters, original and in-depth lore, as well as complex relationships between the ensemble. It just does all of this too fast. It does say positive things for the show that watching it makes you long for more detail and more runtime – and perhaps we will get lucky with more episodes in future seasons. That said, Netflix has yet to renew its new fantasy series, so whether or not the journey of ‘Invisible City’ will continue is yet to be known. There are plenty of unanswered questions and material for a second season (and beyond), and we hold out hope for its renewal.

The first season of ‘Invisible City’ is now available to view on Netflix.