‘Behind Her Eyes’ – How Not To Write A Thriller 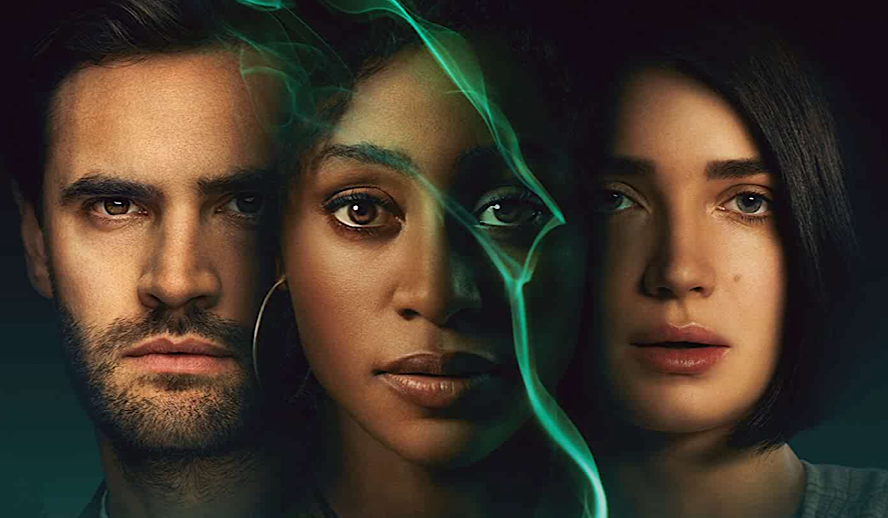 Netflix seems to have found their new go-to formula; limited series based on best-selling books. Some of these have been better than others, from the stellar ‘The Queen’s Gambit’ and ‘The Mess You Leave Behind’ to the less impressive ‘Firefly Lane’. The streaming giant’s latest endeavor into this formula is the psychological thriller ‘Behind Her Eyes’, based on the novel by Sarah Pinborough. This six-episode series follows a single mother, Louise (Simona Brown) as she balances entering an affair with her boss David (Tom Bateman) and striking up a close friendship with his wife Adele (Eve Hewson). However, not all is as it appears, and Louise finds herself pulled into a tangled mystery that is darker than she ever could have imagined.

The premise is solid, if not the most original, but the series as a whole misses the mark so widely you wonder if they were even aiming for a target. The show is a masterclass in how not to write a thriller so, instead of tearing this baffling new viewing option from Netflix down, let’s see what we can learn from it instead.

When we think of world-building, epic fantasies such as ‘The Lord of the Rings’ or science fiction creations such as ‘The Matrix’ may come to mind. In fact, every movie needs its own set of rules, whether it’s a reflection of our day-to-day reality or not. You do not conduct business on Continental grounds in ‘John Wick’, a burglar’s head can be set on fire without serious damage in ‘Home Alone’, and Zooey Deschanel can inspire New Yorkers to sing uplifting Christmas carols in ‘Elf’.

‘Behind Her Eyes’ does not establish its rules. It pulls out two ‘twists’ that aren’t actually twists (more on that later) in its final two episodes. We won’t spoil what they are here, except to note that it’s a sharp left turn from the genre you thought you were in (and no, some incorrect lucid dream techniques and mysterious dream doors don’t count). Concealing your ending so the audience will be surprised and shocked at your grand finale is important, but so is building up the kind of world where that finale can happen without the audience feeling cheated.

‘Behind Her Eyes’ – Your Main Character Should Be Your Protagonist

This is not always the case. ‘Gone Girl’ does a protagonist switch halfway through to great effect. At the conclusion of ‘Ex Machina’, it is revealed that Ava (Natalie Portman) was the real protagonist of that story, even though it is told from Caleb’s perspective. Nick Carraway acts as more of a narrator than the central hero in ‘The Great Gatsby’, as he tells the story of the titular protagonist. ‘Behind Her Eyes’ feels as though it is Adele’s story – not Louise’s. Granted, the ending does explain why the rest of the series is structured the way it is, but feeling lost for six episodes isn’t a high enough trade-off for a final ten minutes of reveals.

This is really a problem of point of view (POV). The series pinballs between the stories of Louise, David, Adele, a younger Adele in flashbacks and, even more confusingly, other flashbacks that center around Adele’s former friend from rehab, Rob (Robert Aramayo). This is problematic from a storytelling perspective on many levels, beginning with the fact that it isolates us from Louise instead of connecting us with her. Louise should be our audience surrogate – she’s the stranger to this world through which we will learn about the characters, their relationships, and the mystery behind it all. We should know what she knows – we should be scared and intrigued and play detective with her.

Instead, the series frequently cuts away from Louise to show us Adele and David’s POV as well, meaning that we always know more than Louise does. Imagine if in ‘Gone Girl’, instead of remaining with Nick Dunne for the first half, the camera kept showing us what Amy was up to as well. Ruins it, right? Or reflect on ‘A Simple Favor’, where Stephanie Smothers (Anna Kendrick) faces a similar dilemma to Louise. In this 2018 black comedy, we remain with Stephanie as she navigates a similar conundrum, but because it is mostly her POV we can relate and connect to her in a way we are barred from doing with Louise.

The problems of POV are most apparent in the flashbacks. The show spends much of its runtime with a younger Adele and her time spent in rehab. The first of these flashbacks, which occurs thirty minutes into the first episode, is the visual version of whiplash. The finale is the worst offender, spending a majority of its runtime in the past in order to gear up for the big reveal. The issue here is that we, the audience, are seeing these events play out – but Louise isn’t. Louise is on a separate investigation that is not nearly as interesting or captivating as the Adele/David/Rob plot. This makes the flashbacks feel like theater staged specifically to give the audience exposition, and as though Louise has been written out of a story that never felt like hers, to begin with.

Twists vs Reveals – Why Twists Are Better

There is a reason Arthur Conon Doyle’s Sherlock Holmes has remained a staple of popular culture for over a hundred years. Doyle did away with sudden reveals – of a detective producing a piece of evidence or a key witness that the audience had had no clue about. Every clue Holmes used to solve a case was there on the page. In any good detective story, the audience should have a chance of figuring it out or, at least, be able to see the twist clear as a day on a second viewing. They should be able to relish in all the subtle signposts the creators left for sharp eyes and attentive minds.

‘Behind Her Eyes’ doesn’t give us twists. It gives us reveals. Due to the rules of the world not being clearly established, there is no way we could guess at the grand finale, no ‘Aha!’ moment where all the pieces click into place. The series tries, repeating a couple of vague lines from earlier in echoey voiceover as the final threads of the mystery are revealed, but this just highlights the lack of actual, tangible clues to set up this conclusion. Additionally, any twists that could have been don’t feel like twists or reveals, because we can guess at them long before Louise does due to us having information the protagonist doesn’t.

There is a good story here. It’s just the delivery that’s lacking. It wouldn’t even be that difficult to transform this into a strong Netflix original. First things first, establish the rules – that what does occur in the final episodes can occur much earlier. Give us a sense of the world and genre we’re in. Secondly, make it Louise’s point of view. Allow us to discover the mystery alongside her, question with her, connect with her. The flashbacks are necessary for the story, but let us see them with Louise – not cut away from her story to deliver information to us, but not her. The most infuriating part is that the device to make this work already exists – Rob’s journal. Have flashbacks only occur when Louise is reading the journal, and that’s that problem solved. With these two edits in place, there are only a few tweaks remaining to convert the reveals into satisfying twists, and boom – you have an engaging thriller.

All episodes of ‘Behind Her Eyes’ are currently available to stream on Netflix.