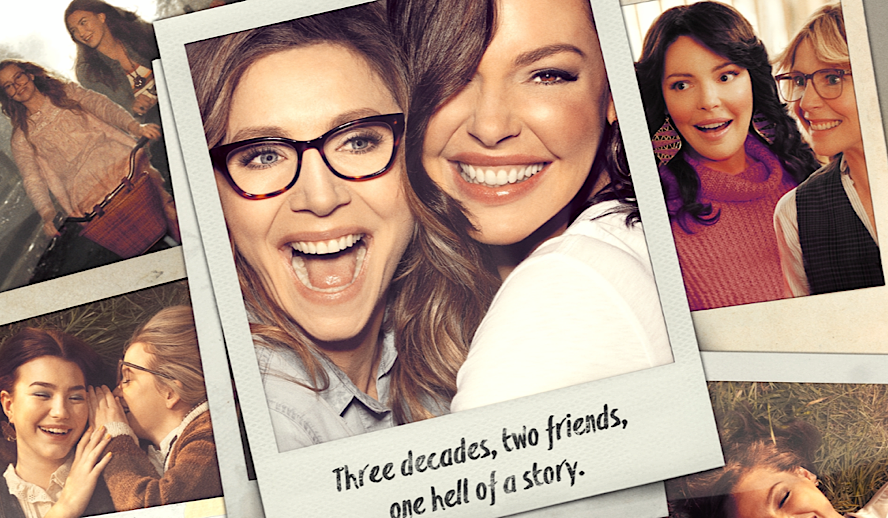 Netflix has a solid track record of turning books into critically acclaimed series – just look at ‘The Queen’s Gambit’, ‘The Mess You Leave Behind’, and ‘Lupin’. Unfortunately for fans of Kristin Hannah’s beloved book, ‘Firefly Lane’, the creators of this new series have rather missed the mark. The tale of two best friends told over several decades has its moments – all between the two leads, Tully Hart (Katherine Heigl) and Kate Mularkey (Sarah Chalke) – but overall fails to land. It spends too much of its runtime split between several sappy love affairs and heavier issues that feel more like afterthoughts than themes. This is a shame because at the heart is there is a solid story worth telling – the tale of true love between best friends.

‘Firefly Lane’ – When Your Best Friend is Your Soulmate

Both Tully and Kate have their fair share of suitors throughout the show, although it’s rather hard to root for any of them. There appear to be three categories of men for these two women to date; the bad boy who is obviously a terrible idea (without any of the usual fun of the trope), nice guy who is there to prompt Kate not to settle, and the caring, sensitive, patient guy straight out of fantasyland, with no personality except to love the lead woman he’s chasing. Add to those categories the creeps and rapists, one token gay character, and that’s most of the men on the show.

Some substance from the side characters, both male and female, would have gone a long way in fleshing out the realism of this world. That said, they fill their due purpose; propelling Tully and Kate along on their love story. We first meet both as teenagers, played respectably by Ali Skovbye and Roan Curtis. Both young actresses do remarkable jobs at capturing the personalities and mannerisms of their older counterparts, and the chemistry between them rivals that between Heigl and Chalke. The story then takes us through Tully and Kate’s ambitious twenties right into the midlife crises of their forties. At this later date, Kate has chosen family and Tully has chosen career, and now they are beginning to wonder if the other had it right.

The series is strongest when this is its focus. It’s refreshing to see a show aimed at a female audience revolve around female friendship as opposed to frustrating love triangles and ‘will they/won’t they’ scenarios. While there is plenty of this in ‘Firefly Lane’, the men in Tully and Kate’s lives feel like stopovers, but the best friends’ love for each other is constant throughout. They are there for each other’s weddings, the birth of children, for every hardship and tragedy. Theirs is the true love story

Heigl and Chalke – The True Draw of the Series

As Moira Rose said about ‘The Crows Have Eyes 3: The Crowening’, “Every project has potential. If you allow yourself to see it and give it the respect it deserves, others might just follow suit.” Both Heigl and Chalke give everything to their respective roles, and their hard work and dedication show every moment they’re on screen.

Heigl has a long history of rom-com stardom, from ‘Knocked Up’ to ‘The Ugly Truth’ to ‘27 Dresses’. This is similar fare for her, but that does not mean she phones it in for a second. She embodies the cliche ‘wild girl who is secretly miserable’ trope and makes it her own, bringing the depth and complexity that the other characters keep reminding us that Tully has. Chalke is likewise charming and personable as the dorkier and less confident Kate, even in the scenes that seemed to have wandered in from a wackier, ‘Parks and Recreation’-style sitcom. These include Kate opening the door to her boyfriend’s mother naked and a particularly painful scene that includes draining a dog’s glands over a toilet.

While both leads far outshine the material and supporting cast they have to work with, the time-hopping gimmick does them few favors. No one is buying that either Chalke or Heigl is twenty-two. This is not a critique on either woman (we have enough of that, unfortunately), but no amount of soft focus and airbrushing is enough to knock twenty years off anyone. The lazy styling of this eighties time period does them no favors either. The costuming often feels more as though the characters are off to an eighties-themed party as opposed to actually living in the decade. The colorful aerobics gear and Kate’s poofy bridesmaid’s dress are particular offenders. The actors also seem to constantly be compelled to state what year it is out loud, in a way that never feels natural. It also relegates what is arguably the more interesting story – Kate and Tully as teenagers dealing with neglectful parents, puberty, and sexual assault – into mere setups for the character choices in the more modern-day timelines.

So, is it worth watching?

If you’re a fan of the book, this series will likely pale in comparison (although it is almost impossible to please hardcore book fans with any on-screen adaptation. The Harry Potter fandom is still complaining that Hermione’s dress was meant to be blue). If you’re new to the story and want a somewhat competent, easy-to-digest ten episodes with two talented leading actresses, this could be your next binge-watch. There is good material in this show, it’s just weighed down by a bloated runtime, and a supporting cast that can’t sell the less-than-stellar writing like Heigl and Chalke can.

Condensing the story to fewer episodes or even going for a film adaptation instead would have gone a long way. This would have meant culling scenes without Heigl or Chalke, and lopping out the more tonally bizarre choices. There’s a baffling B-plot of Johnny Ryan (Ben Lawson) recovering from a traumatic experience during his time as a war reporter, and being unable to sell the story to any local news stations. The armed robbery and life-and-death stakes feel like bad fanfiction, especially as the show has proved that it can do subtlety and get us invested in much more relatable, everyday struggles.

If you’re looking for an easy watch that requires little commitment, perhaps this show is up your alley. There’s enough in Heigl and Chalke’s performances and chemistry to provide entertainment, smoothing over what is otherwise a bumpy ride down ‘Firefly Lane.’

All episodes of ‘Firefly Lane’ are now available on Netflix.