‘The Queen’s Gambit’: A Chilling Stare at the Illusion of American Success 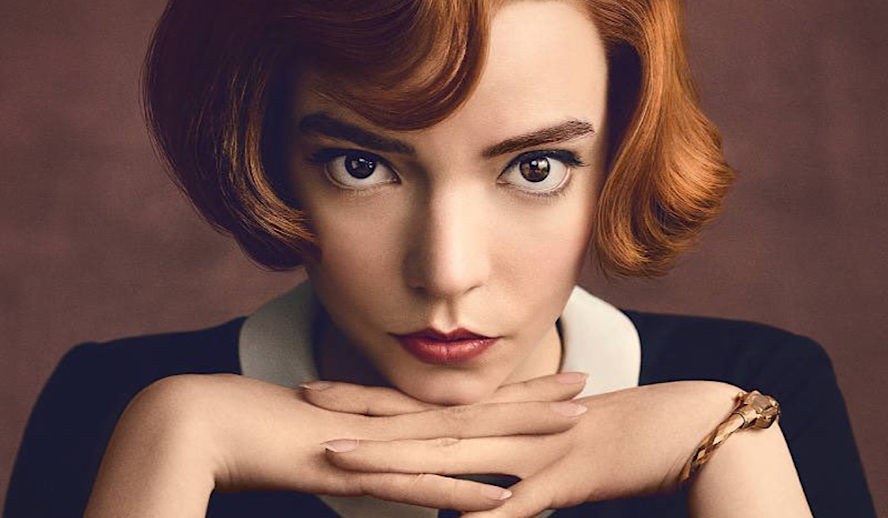 With an ice-cold stare, a kindling and innate rage, and girlishly ginger hair, Beth Harmon is a fiery lioness in ‘The Queen’s Gambit’. Played by the electric Anya Taylor-Joy, the actress is a young behemoth of a chess player, bringing Walter Tevis’s novel of the same name to stunning reality. Orphaned from childhood, Harmon is a living consequence of her family’s actions. However, the tragedy of her earliest years lay the groundwork for her destiny. Discovering the game of chess with her foster school’s janitor Mr. Shaibel (Bill Camp), Harmon quickly becomes a young prodigy.

Unlocking the facets of her mind with “sedatives”– little green pills initially given to the foster kids as a sort of ingestible pacifier, Harmon begins to manipulate the shadows of her communal bedroom into the silhouettes of chess pieces using her mind. She’s a genius. And after Harmon’s first tournament in her hometown of Lexington Kentucky, the child prodigy is set to take over the chess world, crushing every opponent that comes within her dainty fingertips for the next thirteen years. Taylor-Joy’s vicious grip around her chess-playing prey will leave you restless in your seat as the cogs transform simple hand placements into debilitating defeats.

The Split star has an impressive resume at 24 years old and the depthless range to back it up. Believably portraying everything from a girl with her dolls to a woman sucked up by the vacuum of crippling loneliness, Taylor-Joy’s performance is beyond her years. While there are plenty of co-stars that go toe-to-toe with Taylor-Joy’s scorching wit, few create scenes as compelling as Yale drama student Moses Ingram. Playing Jolene, a girl with a sincerity pure and pretty as pearls, Ingram’s naturalism on screen is a marvel to behold. When Ingram disappears from the script, the result is a cataclysmic spiral of immense loneliness for Beth.

‘The Queen’s Gambit’ – What it Means to Win

The Netflix original series asks hard questions about success. Harmon’s gift is backed by triple the amount of training, reading, practicing, and mental replaying. But what Beth must ask herself is: what exactly is winning? She’s been called an intuitive player, often improvising her moves based on her opponent, not doing any of the “problem” exercises that she claims don’t prepare you for the real game. Although she plays chess with a boiling vitality, behind the flashing cameras and magazine spreads, Harmon grapples with the weight of her real life.

“People like you have a hard time. You’re two sides of the same coin, you’ve got your gift and you’ve got what it costs,” says her original teacher Mr. Shaibel. The dichotomy between her pain prone parasite and her chess playing brilliance is as evident as the pattern of black and white squares on the stage in which our drama is set. The game itself can be a metaphor for loneliness if players allow it; a quest to be the only one standing, a plight to wither yourself away, witnessing the nature of your partner’s heart, just to crush it as soon as you’ve begun to understand it. It’s rare to see Beth defeated, but when we finally get a glimpse of the royal palace crumble, we watch the entire empire fall and we see Beth tango with losing everything.

While Chess is a lonely woman’s game, it can also be leverage for romance. The west is far too familiar with the matrimony of love and war, and chess is an homage to our violence and gentleness both. The small thumps of the chess pieces meeting their battlefield, the dance between a rook captured by a stoic knight can be a romantic tale if players allow it. In the case of Harmon, watching her flirt with what life can be for her is a dream come true.

I suppose I’m innately prone to a capitalistic brainwash that makes me fear Harmon can not have her thrills and her proteogenic success; every night swim leaves you unnerving that there will be some grand consequence for her happiness. Every beer leaves me wondering if it’ll be detrimental to her match the next morning. Even pills taken days away from a chess match leave me holding my breath that she’s not throwing away everything she’s earned. The show pays a nod to anti-individualism and an emphasis on working together, which contextualized with the success of looming antagonist USSR chess world champion Vasily Borgov (Marcin Dorocinski), is a subtle smirk at communism.

Beauty at What Cost?

At some point, the square of your screen itself becomes the board of which editing, sound design, and acting are mere pawns for director Scott Frank. At times the screen can become a single square of blackness, elevating the power of one of the most important assets the show has in elevating the mundane game; the score. The only way to sustain a story who’s brut weighs on the questions and conclusions drawn from a game as potentially mundane as chess, is through compelling uses of editing, sound design, acting, and score. The Queens Gambit is a masterclass in all four.

However, the shadow that looms darkest over this show, a shadow darker than any other imagined chess piece cast on the ceiling is the gloom of historical amnesia. Sexism and racism both are experienced in the way one might discover them in 2020, not the 1960s. While Netflix is very good at making us forget the perils and horrors of our not-so-distant American past, for those of us who refuse to forget, attempts to gloss racism, homophobia, and sexism are cringe-worthy at best.

I suppose the alleviation of historical-cultural restraints provide contemporary representation where it can often be lacking (where women can be young, powerful, and sexually autonomous, black women can be complex and say more than the phrase “what can I get for you missus– mister”) the grander harm of cultural amnesia is the implications for real-life Americans; erasure in our media leads to erasure in real life and that’s inexcusable. In other words, we must ask more from our art when it comes to providing us with diverse characters that are both nuanced and who operate under realistic circumstances.

In one of the show’s most soaring moments, in contrast to a devitalizing tragedy, Beth Harmon is handed something foreign and obtuse: a chance at freedom. In observing this we see a Beth that’s almost unfamiliar as she begins to seriously confront her two sides; the first, a hybrid between a body and a chess piece, a precise tool, an unfaltering object with no destiny or ordinance and thus a version of perfection, and her second, a side that questions what exactly is life without life? In her answer is a stunning realization of friendship and humanity. I employ you to watch The Queens Gambit for yourself and enthrall yourself for the love of the game.