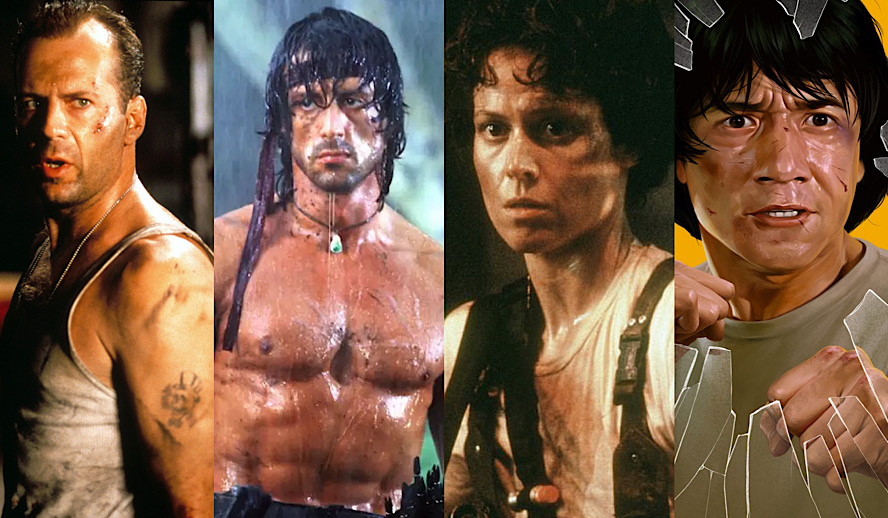 Video Version of the Article

Semantically, the term “action movie” could theoretically refer to any number of things–after all, anything done by the actors is technically action. That’s why directors call it out.

Nevertheless, “action movie” ubiquitously elicits a specific kind of film that was codified as a genre in the 1980s. You think of something akin to Ben Stiller’s fake trailer at the beginning of ‘Tropic Thunder’–beefcakes kicking ass in the most improbable of scenarios, either using an infinitely-loaded machine gun or the brutality of their own fists. Forget character development, subtextual drama, moral and ethical dilemmas, or philosophical poetics that strive to understand the human condition–the answer to everything is either a punch to the face or a hailstorm of bullets.

Of course, that kind of stereotypically mindless action movie has long gone out of style, becoming subject to critical failure and parody from the 1990s onward with films like ‘Last Action Hero’ and the aforementioned ‘Tropic Thunder’–nevertheless, traces of its DNA can be found in every tentpole blockbuster today.

This isn’t an article about the sociopolitical factors of the ‘80s, such as Reagan and the aftermath of the Vietnam War, and how those could have contributed to an increased demand for action, because I don’t believe those really played a part–at least not to any significant degree. People are simply drawn to exciting, engaging, and innovative entertainment, and technological advancements allowed for stunts and special effects that would prior be both practically and financially improbable.

One of the reasons that action has thrived and endured is because it’s a narrative structure that embeds itself into any other genre–sci-fi, crime, war, superhero, and so on. What’s interesting is that many of the ‘80s’ defining action films belonged to franchises that more closely adhered other genres, and the way in which they turned about-face to embrace emerging action conventions exemplifies the actionification that occurred in the ‘80s.

The most prominent examples are ‘Aliens’, ‘Rambo: First Blood Part II’, and ‘Terminator 2: Judgment Day’, all of which feature archetypal paragons of the action hero and require no introduction. Fresh audiences familiar with only these action-packed sequels might be surprised by their prequels which, while filled with action sequences, are a far cry from the stereotypical representations that we know today.

‘First Blood’ is probably the closest of these prequels to the “action movie,” featuring such improbabilities as its protagonist John Rambo (Sylvester Stallone), one of cinema’s most iconic and muscle-bound action heroes, jumping off a cliff and suffering inconsequential wounds. Nevertheless, its core story is that of a traumatized and disillusioned Vietnam War veteran, the last living member of his unit, who comes home to find he’s not welcome–the climax of the film isn’t a physical confrontation, but an emotional breakdown regarding the trauma and unfair treatment that he’s suffered.

Unlike later iterations of the franchise, beginning with ‘First Blood Part II’, Rambo isn’t mowing down faceless hordes of foreign combatants with guns and arrows–he’s waging a guerrilla war on American soil against a corrupt and persecutory local police force. He uses his training and ingenuity to incapacitate the officers that pursue him into the woods, but makes sure not to kill–his one casualty is accidental.

Additionally, ‘Alien’ and ‘Terminator’ are both closer to sci-fi horror than action, and masterpieces of the genre to boot. They prioritize the dramatic tension that comes with being relentlessly hunted by an apex predator, but their respective sequels, both directed by James Cameron, forego horror elements in favor of impressive action set pieces.

Birth Of The American Action Hero

Of course, the action in these films is centered around their protagonists, who have come to be known as “action heroes”–resourceful, quick-thinking, and often solitary characters who end up saving the day through improbable feats of violence. Stallone and Schwarzennegger stand out as exemplars of the muscle-bound hero, capable of strength and endurance beyond that of mortal man–they also carry machine guns with one hand and shoot bullets that seem magnetically drawn to their adversaries.

There’s also Sarah Connor (Linda Hamilton) from ‘Terminator 2’, Ellen Ripley (Sigourney Weaver) from ‘Aliens’, and John McClane (Bruce Willis) from ‘Die Hard’, the latter of whom exemplifies the reluctant lone wolf–it’s this aspect of their characters that connects to action heroes of the past.

Alan Rickman as Hans Gruber said it best in reference to John McClane–”just another American… who thinks he’s John Wayne.” The core characteristics of these heroes and their appeal is not something unique to the action movies of the ‘80s, but a rich tradition that goes back to the earliest days of cinema.

It’s evident in Humphrey Bogart and the rugged noir detectives who solve the case while playing by their own morally ambiguous rules. It’s Toshiro Mifune as the nameless, masterful ronin from ‘Yojimbo’ who’s the same as Clint Eastwood’s Man With No Name from ‘The Good, the Bad, and the Ugly’, both capable of taking on a numerically superior force through the skill of their blade or pistol–and of course, John Wayne typifies the self-reliant gunslinger,

These were action heroes before that “action” meant explosions and slinging one-liners–it’s also particularly interesting to consider that the phenomenon was not unique to the United States. Samurai films would have a profound effect on the development of action cinema, but it was also Hong Kong filmmakers who simultaneously developed their own form of action hero and high-octane cinema that would have a profound global impact.

Hong Kong action cinema would flourish in the ‘80s as it did in the U.S., but the resurgence of interest in kung fu actually began in the ‘70s. ‘Chinese Boxer’ by Jimmy Wang Yu is widely credited for igniting the kung fu boom, in tandem with directors like Chang Cheh and Lau Kar Leung. However, it was the success of one man that established kung fu as an international phenomenon–Bruce Lee.

Kung fu films and their heroes were different from American action heroes by the virtue of their martial arts, which relied on the actual skills of their actors. As momentous as Bruce Lee’s films were, it was actually one of the stuntmen in his films ‘Fist of Fury’ and ‘Enter the Dragon’ that ushered Hong Kong into the ‘80s by combining traditional kung fu with physical comedy and extravagant stunt work–Jackie Chan. If you’ve never seen ‘Police Story’, I highly recommend you do so–it’s one of the greatest action films of all time.

At the same time, director John Woo, who would later direct such films as ‘Face/Off’ and ‘Mission Impossible II’, burst onto the Hong Kong scene in 1986 with ‘A Better Tomorrow’, a completely unknown movie that ended up breaking Hong Kong box office records. This, and his 1989 film ‘The Killer’, introduced the subgenres now known as “heroic bloodshed” and gun fu, featuring Chow Yun-fat as a noble Triad gunman who overcomes insurmountable odds using his dual-wielded pistols.

Related article: Remakes – Classics That Should Not Be Remade: Films That Are Untouchable

The style, structure, and tropes of Hong Kong cinema were obviously different from that of their American counterparts, but it’s interesting that action would boom in sophistication concurrently around the world–it also can’t be understated how the films of the Hong Kong action scene would have equally as profound an impact on cinema worldwide. The concepts and tropes that were born in Hong Kong at this time can still be seen to this day, particularly in the films of Quentin Tarantino–however, like Hollywood’s own endeavors, inform the latent framework of every action movie produced today.

It is tempting to draw sociological conclusions as to why action burst onto the scene so bombastically in the ‘80s, in the same way that one might suggest that the rise of superhero movies is related to the United States’ post-9/11 political climate. Whether or not these claims have any merit is frankly beyond the scope of my consideration, and I don’t consider them of utmost importance to the discussion–after all, though art may imitate life and life may imitate art, art ultimately mimics art most of all.

Today, we take for granted the narrative flow of our tentpole blockbusters, and CGI has facilitated action set pieces that would once have been beyond our wildest dreams. It’s also tempting to watch films of the past and believe that we have progressed beyond them, in one way or another. However, I hope that this article instills some curiosity so that you may seek out and view some of these films on your own–after all, stereotypes and clichés were once groundbreaking expressions of some kind of universal truth, and they all stem from somewhere.

At the very least, action movies from the ‘80s are a hell of a lot of fun to watch.