Was The Blockbuster Movie ‘300’ Political Satire in Disguise? 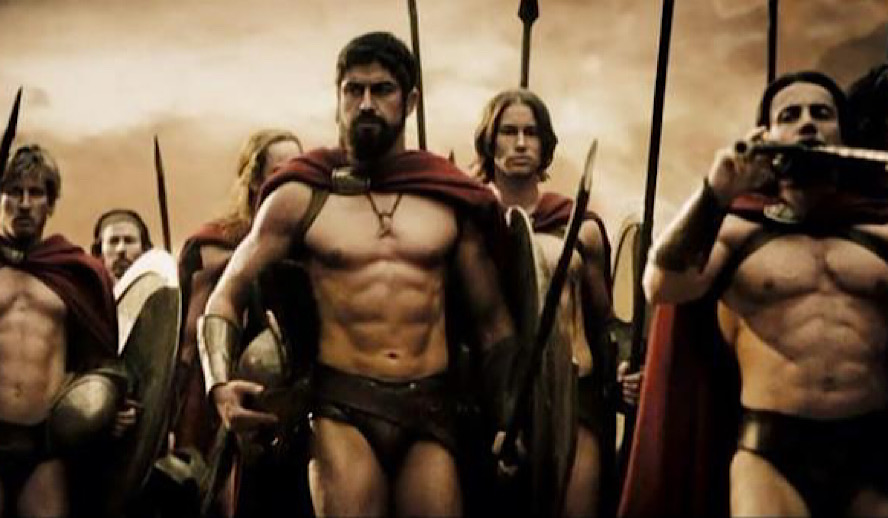 Laconic: to speak tersely. The word comes from Laconia, the region of Greece administered by Sparta, the ancient citizens of which were famed for speaking bluntly, with few words–laconically. Over time, the widespread fascination with ancient Spartan culture has been termed Laconophilia, no better example of which being Zack Snyder’s ‘300’.

Based on Frank Miller’s comic book of the same name, ‘300’ was one of the most iconic films of the 2000s, like it or not. It’s an epic film that resonated with audiences despite the widespread critical backlash, in part because it evokes the underdog–300 Spartans, against all odds, hold their own against an overwhelming Achaemenid (ancient Iranian) force just long enough to ultimately save Greece (never mind the 700 Thespians who helped).

Perhaps more importantly, it speaks to a perceived cultural identity–the Spartans represent Western civilization and its virtues, while the Achaemenids represent… the other. At a time when U.S.-Iranian relations were strained (which hasn’t really changed), critics were quick to comment on the political allegory present in the film–but what was that, exactly?

At one contemporary press junket, a reporter asked Snyder, “Is George Bush Leonidas or Xerxes?” They continued to assert that former President Bush was Xerxes, who led a massive army against a small force of fanatical guerilla fighters defending their homeland–another reporter rebutted that Bush was Leonidas, last bastion and defender of freedom. Snyder would comment that no political symbolism was intended, but appreciated the press that the controversy generated.

Contemporary Iranians were outraged by the film and its massive success, considering it a cultural smear campaign. However, its bombastically one-sided propagandism reminds me of another film–Paul Verhoeven’s ‘Starship Troopers’, a deliberate satire of fascist militarism. Before we get into that, let’s take a brief look at the supposed history that’s depicted in ‘300’.

A Brief Comparison: History vs. ‘300’, Slavery in Sparta

Ancient history is a difficult subject because it’s ultimately impossible to know the truth for certain–this muddiness particularly rears its head when discussing the role that slavery had in the Achaemenid Empire. It’s commonly understood that slavery was neither widespread nor embraced by Achaemenid culture–it also wasn’t hereditary, as it was in American chattel slavery.

Part of the difficulty in ascertaining a concrete truth comes from the fact that the Achaemenid Empire neither had nor imposed a homogenous culture on its subjects, instead allowing them to retain their local traditions, many of which relied heavily on slavery–Babylon and Egypt, for instance, had a rich history of slavery, as did the Greek city-states.

In ancient Sparta, slaves, known as Helots, were not only widespread, they constituted a majority of the population. Spartiates, who were the elite full-citizens, treated Helots cruelly and knew it. Even by the account of Xenophon, an Athenian-born historian and early Laconophile who was banished from Athens for fighting on the Spartan side in the Corinthian War, Spartiates always carried their spears to rule the Helots through fear and intimidation, only undoing the straps of their bucklers safely in the confines of their own home lest the Helots try to take them.

Obviously, slavery is but one aspect of these ancient cultures, and historical behavior cannot be expected to adhere to the moral standards of our time–I only discuss it to point out the constructed myth that presents Sparta as a prototype, predecessor, and defender of “Western civilization,” whatever that’s supposed to embody. It wouldn’t be a point of contention at all if ‘300’ didn’t so explicitly paint the Achaemenids as encroaching imperialists who threaten the free world with a tyrannical way of life.

This brings our discussion to Frank Miller, the comic book writer, and artist who rose to prominence for his work on Marvel’s ‘Daredevil’, going on to pen ‘Batman: The Dark Knight Returns’ (which would be the inspiration for elements of Christopher Nolan’s ‘The Dark Knight Rises’ and Snyder’s ‘Batman v Superman: Dawn of Justice’), ‘Sin City’, and ‘300’.

After 9/11, Miller began work on a ‘Batman’ series for DC Comics that involved the Caped Crusader defending Gotham City from Al-Qaeda terrorists–Miller himself stated that the comic would have been “a piece of propaganda” in which Batman “kicks Al-Qaeda’s ass.” The working title of the comic was ‘Holy Terror, Batman!’, a reference to Robin’s catchphrase in the ‘60s ‘Batman’ TV series (“Holy _____, Batman!”).

Eventually, it ceased to be associated with DC Comics and became a standalone graphic novel released in 2011 called ‘Holy Terror’. The cover shows the protagonistic vigilante named The Fixer punching out a terrorist in the same vein as Captain America punching Hitler on the cover of his debut comic. It’s noteworthy that the knife-wielding terrorist on ‘Holy Terror’s’ cover is wrapped in mummy-like bandages.

It was an unapologetic exercise in Islamophobia, with Miller stating in a 2007 interview that ‘Holy Terror’ was “bound to offend just about everybody,” reiterating in a blog post, written in response to critical outcry, that the book was intentional propaganda “without apology.” In recent years, Miller has reneged on this position and expressed regret.

In fairness, is this relevant to ‘300’? Both the film and the graphic novel on which its based predate ‘Holy Terror’, but it’s hard to ignore the fact that the author of a work accused of Islamophobia would later come out with one of the most astonishingly Islamophobic works of all time. Ignoring that, it displays an intense moral simplification that can be said to be present in ‘300’, taking a multifaceted conflict with nuance and reducing it to a story of good vs. bad, us vs. them.

Related article: The Leaked Kamala Harris Vogue Cover: Where Do We Draw The Line Between Celebrity And Politician?

Propaganda and The History We Write Today

What ultimately sets ‘300’ apart and allows some room for discussion is that its entire narrative framework is of a surviving Spartan giving his account of the battle to rouse other Greeks–it’s overtly biased and subjective, and in this way, it’s a piece of propaganda, just like ‘Holy Terror’.

I bring the discussion back to Verhoeven’s ‘Starship Troopers’, the satire of which is made clear by numerous visual allusions to historical propaganda films such as ‘Why We Fight’ and ‘Triumph of the Will’, as well as the conflation of American and Nazi imagery.

What’s interesting is that the 1959 novel on which it’s based is not satirical in the slightest–it’s a straightforward extolment of fascist and militaristic concepts. What’s also interesting is that ‘Starship Troopers’ contemporary response was confusion and disapproval, most critics believing the film to be a celebration of fascism as opposed to a satire.

Verhoeven has explicitly stated that he evoked Nazi imagery because he saw it as a natural evolution of the U.S. after World War II, but it’s taken 20 years for the satire to be widely understood and accepted. It seems that, at its highest level, satire is nearly indistinguishable from earnestness–conversely, Snyder’s earnestness with ‘300’ is nearly indistinguishable from satire. I don’t believe Snyder intended for his film to be satire, and it doesn’t ultimately matter–it unironically resonated with the contemporary masses, and it reflects the zeitgeist.

Related article: The Storming Of The US Capitol, One Week Later: What We Know Now And What’s Next

The earthshaking significance of 9/11, the war on terror, and the ongoing effects that continue to be felt globally (such as the European migrant crisis and consequently Brexit, just to name a couple of Eurocentric examples) have truly fallen to the wayside. I’d argue that the increase in popularity of satirical news shows like ‘The Daily Show’ and ‘The Colbert Report’ was a direct result of George W. Bush and his administration, but who remembers?

Bush has seemingly rectified his legacy by speaking out against former President Trump in recent years, even though the war in Afghanistan and the Iraqi conflict, initiated by the U.S. as misguided responses to 9/11, continue to this very day. Instead, Bush has made headlines in recent years for things like sharing cough drops with former first lady Michelle Obama at his father’s funeral, or his painting endeavors.

It exemplifies the power of constructing a narrative and signaling virtue over actual facts, and ‘300’ reflects the normalization of propagandism, intentionally or not. It’s a microcosm of the way in which facts and events are slowly distilled over time until the common perception has adhered to a narrative that may or may not reflect the so-called truth.