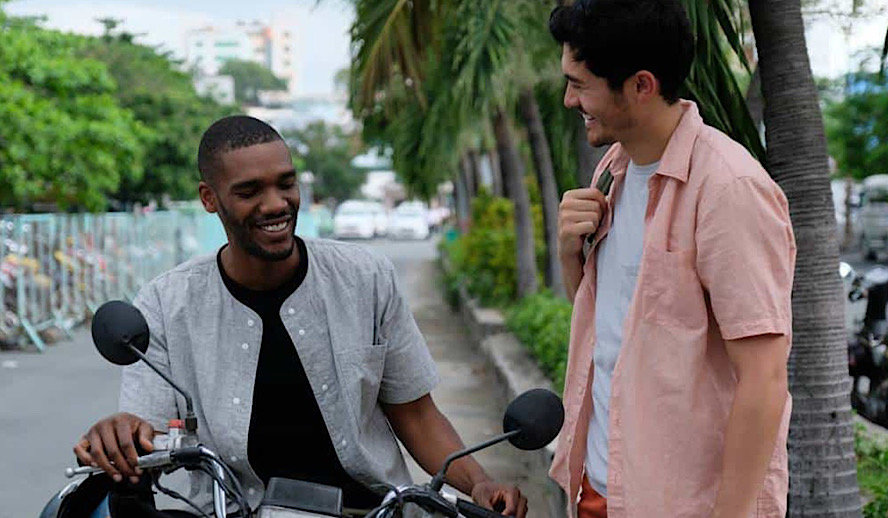 In ‘Monsoon’ (2019), a gay Vietnamese British man named Kit (Henry Golding) struggles to reconcile his national and cultural identities when he returns to Vietnam for the first time in 30 years to scatter his parents’ ashes. When Kit was a child, his family fled Vietnam in the aftermath of the Vietnam War and settled in England. Upon returning to the place of his birth, Kit struggles with processing the grief of his parents’ deaths, finding his place in a country he no longer recognizes and whose language he no longer speaks, and connecting to the various characters in the film. A great aspect of ‘Monsoon’ is that Kit’s sexuality is the one part of his identity that he is not struggling to comprehend, which allows for his soul searching to focus on understanding who he is regarding his national and cultural identities.

‘Monsoon’ is the second feature-length film by Cambodian British director and screenwriter Hong Khaou. When conceiving of ‘Monsoon’, Khaou drew on his own experiences of growing up in Vietnam and immigrating to the United Kingdom as a child. “This is my attempt to try to put a personal face to the immigrant experience,” Khaou said in an interview with AnOther Magazine. “So often, we don’t try to understand why somebody uproots their entire family and goes through so much trauma to move to a new country. It isn’t like you just wake up one day and think ‘this is what I’m going to do’. It isn’t like you’re just going on a journey.”

Variations on the Theme of Connection to National and Cultural Identities

In the rumble of motorbikes, the blare of car horns, and clanking of the train, there is a constant thrum of activity that surrounds Kit and underscores his feelings of alienation. “Vietnam is changing so quickly,” Khaou said in another interview. “It wants to be this exciting new capitalist country, and everything is possible there. I wanted for Kit to have this sense that when he arrives in Vietnam it is this foreign place, and he has to slowly forge a relationship with it.” Although Kit is Vietnamese, he feels disconnected from the country of his birth having grown up in England and having not been back to observe the changes occurring in Vietnam. Kit’s feelings of displacement particularly speak to the experiences of people in the Asian Diaspora.

Each character in the film represents a different aspect of identity relating to Vietnam. Kit was born in Vietnam, but now returning as an adult, he can no longer speak the language and finds his surroundings unrecognizable. He meets up with his childhood friend and neighbor Lee (David Tran), who now owns a cell phone shop and who remained in Vietnam even though his family tried to leave when Kit’s did. Although Lee shows Kit around the place they used to live and the market where they used to play, the memories Kit does still retain of his childhood in Vietnam aren’t enough to overcome his initial disconnect with Lee and Kit’s own Western outlook. Lee plainly yet privately observes in Kit how his life may have been different if his family had emigrated along with or instead of Kit’s family.

Kit begins a casual sexual relationship with Lewis (Parker Sawyers), a Black American clothing entrepreneur whose father fought in the Vietnam War. Lewis has lived in Vietnam for a while and has integrated into the culture of young professionals. Though their personal relationships with the Vietnam War are a point of tension, they continue to open up to each other and their relationship evolves into something more comfortable and meaningful. Kit also meets Linh (Molly Harris), an art tour guide who dreams of traveling but whose parents want her to take over the family business of scenting lotus tea. Linh grew up in Vietnam and represents the younger generation that seeks to break away from their parents’ traditional values.

Benjamin Kračun’s brilliant cinematography captures the bustling streets of Ho Chi Minh City, the achingly empty interiors of Kit’s hotel rooms, and the expansive spaces that surround Kit or push him to the edge of the frame. On Kit’s first date with Lewis, meeting for drinks at a bar, the camera alternates between them, and, in an unusual and jarring move, does not center the characters. Instead, the characters are equally weighted with the empty space beside them. Although Kit is often framed this way throughout the film, it’s especially striking to see in a dating scene, where connection and closeness are the chief goals. Perhaps it’s fitting, then, since Kit and Lewis don’t seem to emotionally connect at first, though they do hook up after their date.

In one of the loveliest film scenes in recent memory, Linh invites Kit to observe and help out with her family’s business of preparing lotus flowers for scented tea. The vibrant pink petals, green stems and leaves, and yellow stamens of the lotus flowers are as charming to behold as when Kit reveals to Linh and her family that his mother chose to emigrate to England because she liked a picture she saw of the Queen. The final shot of this scene takes an overhead view of the flower preparations: lotus petals litter the floor, obscuring the tiles underneath, while the people gathered around the pile of flowers are relegated to the edges of the frame. The shot strikes an emotional chord, perhaps because in this scene Kit has made a connection with another person in Vietnam that isn’t somehow fraught with emotional and cultural disconnection, like his relationships with Lewis and Lee. Or maybe it’s that Khaou embraces lingering on the film’s rich visuals, emphasizing the importance of observing and acknowledging the beauty around us, even when connecting to the people around us is difficult.

The greatest triumph of ‘Monsoon’ is how it depicts Kit’s relationships with each of the other characters. Despite initial struggles, he manages to connect with every single other character in the film and ultimately makes strides in connecting with his birthplace of Vietnam. Compared with the stifling isolation in which Kit begins the film, it is an enormous feat that by the end, he can happily kiss Lewis in a crowded bar and gaze wonderingly out at Ho Chi Minh City from the bar’s rooftop. Though you won’t find high-octane shouting matches or rivers of tears in ‘Monsoon’, Kit’s journey in understanding the fractured parts of his identity is emotional and moving. With heartfelt storytelling and stunning cinematography, Khaou’s film beautifully depicts Kit’s process of beginning to reconcile the disparate parts of his identity, figure out who he is, and who he could be.