‘Trippin With the Kandasamys’ Fantastic or Forgettable? 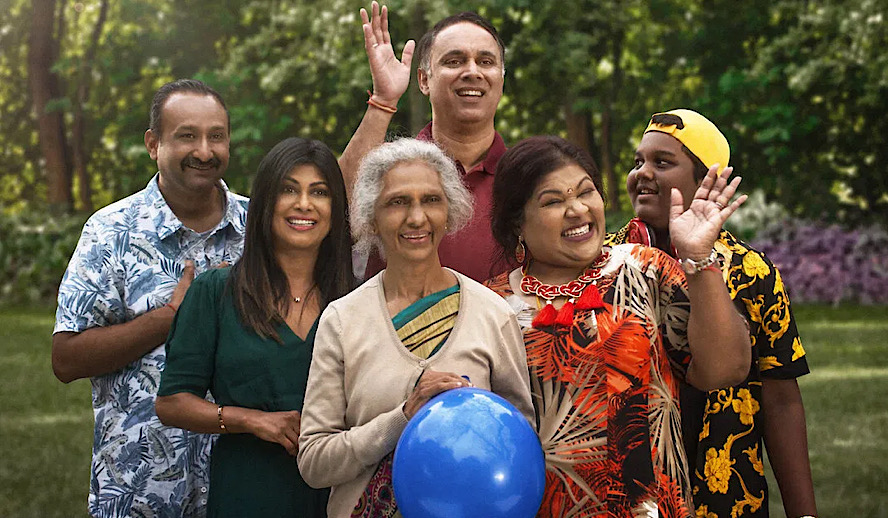 Photo: ‘Trippin With the Kandasamys’/Netflix

Up until this week, I was completely unfamiliar with the Kandasamys films and had to do a bit of research before diving into the latest installment. The first film released in July of 2018 ‘Keeping Up with the Kandasamys’ directed by Jayan Moodley kicked off the franchise. This South African Indian comedy follows the feud between neighbors Shanthi Naidoo (Maeshni Naicker) an overbearing mother and Jennifer Kandasamy (Jailoshini Naidoo) the snobby yet effortlessly elegant mom next door.

Shanthi is tired of being outshined by Jennifer in every little thing she does and while these two matriarchs fight to be the very best and intend on being rivals until the end of time, they unwillingly are forced to team together to break up their children who have fallen in love.

Watching these two unlikely teammates work together ends in absolute hilarity. This film broke records in South Africa’s box office while appeasing many critics and the South African Indian community who are often underrepresented in the film industry. The film drew in a lot of revenue in the South African box office (a total of R16-Million) becoming the highest-grossing locally made film in 2017. Due to its massive success, the film was granted a sequel ‘Kandasamys: The Wedding’ which premiered in 2019. Jayan Moodley returned to direct and this film focused on Shanthi and Jennifer’s daughter and son (who the mothers unsuccessfully broke up in the first film) that are set to get married.

While the mothers have just about squashed the beef between them by the end of the first film, tensions rise as it becomes clear that each mother has very different opinions on how a wedding is supposed to go, and these opposing standpoints are a recipe for chaos. This film, similar to its prequel, received fantastic reviews from audiences and was additionally rated one of the best African films of 2019 by African Arguments.

The Newest Installment – ‘Trippin With the Kandasamys’

Now that you are thoroughly caught up in regards to the previous two films, let’s talk about the highly anticipated release of the third Kandasamy film ‘Trippin With the Kandasamys’. The original cast and director returned for this film which is now streaming on Netflix which allows the audiences to reach much further than before allowing a global viewing opportunity—190 countries to be exact. Jayan Moodley spoke to IOL.com speaking on his collaboration with Netflix, “As a South African filmmaker the feelings are a mixed bag of delight, absolute thrill, happiness, and excitement.

To have our story on the world’s largest streaming service and to be able to share a slice of South Africa with over 190 countries is nothing short of awesome. It’s the stuff dreams are made of.” He also stated, Dealing with Netflix for the last 18 months, from legal to accounts to production and marketing and a host of people, I felt like someone was holding my hand every time. This partnership means the film is going international on a worldwide platform; we couldn’t ask for anything better. We want to also offer gratitude to Netflix, for helping us tell our stories to the world and giving us that opportunity to be authentic and true to our communities.”

Now let’s discuss the film’s plot. The famous duo that consists of Jennifer Kandasamy and Shanthi Naidoo are feeling as though their marriages need a bit of a revival which leads them to plan a romantic getaway for themselves along with their husbands. Of course, in true Kandasamy fashion, nothing goes as planned once upon arrival the wives find out their husbands have surprised them by bringing the entire family along, which screams nothing near romantic. To make things worse an especially uninvited and drop-dead gorgeous guest by the name of Baby (Uraysha Ramracheya) tags along who has no fear of stirring the pot and causing the wrath of jealousy from Jennifer and Shanthi.

The cast and crew worked long days for five weeks straight when filming the third installment of this franchise. Naidoo who plays Jennifer Kandasamy shared with IOL.com “The Kandasamy themes are so universal,” said Naidoo. “From the experiences to the characters. Everywhere you go in the world you have mothers who interfere in their children’s lives. Overprotective mothers, mother-in-law problems, insecurities – everyone in the world can identify with a mother-in-law problem and annoying neighbors. Women have love/hate relationships. Those are relatable themes wherever you go. This story is for everyone and about everyone in the world.”

My Thoughts on Netflix’s Latest Release

Like I mentioned earlier, I was not familiar with these movies until just this week and frankly jumped into this franchise blindly by only watching the latest release. I’m sure I missed a bit of character development considering where the two leads started in the first film as enemies and now are best friends planning couples vacations together in the third, however, it is not essential to watch the previous films to get a quick grip on what is going on and the relationships between all of the characters are clear and lively. Despite this film being on the rather shorter side (93 minutes to be exact) I still found many moments to be dragging throughout.

The film wasn’t as funny as I was hoping it to be and found that some of the most comedic moments were already spoiled by the trailers alone. I will admit however that I am a rather harsh critic, considering comedies aren’t usually my go-to, but I truly was hoping this one would prove me wrong, especially knowing the huge successes the first ones held. I felt as though there were so many storylines all happening at once that I could never fully become invested. I also wished that the writing was a little stronger and felt as though a lot of the jokes fell flat.

I will say that the setting of the movie was stunning, with several shots of beautiful beaches while the families were on vacation, and I can’t forget to mention that all the actors have impeccable chemistry with one another, it is very apparent they have been working together for years because of how comfortably they work with each other. Overall, I probably wouldn’t watch this film again and would most likely recommend one of the other hundreds of comedy films on Netflix’s roster, but I am happy to have been introduced to this franchise and hope that it appeals to the many fans that the first two films attracted.