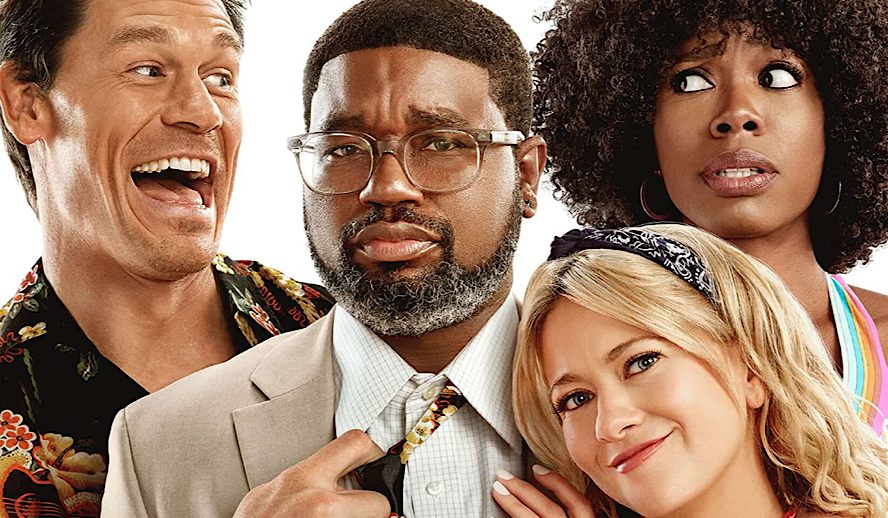 When totally-normal couple Marcus and Emily’s pre-wedding vacation suite is flooded from the floor above, fate puts them into contact with Ron and Kyla, hot off of a jet-ski smoke session and touting coke-rimmed cocktails. We all have Rons and Kylas in our lives; those people are best cherished for special occasions like parties, barbecues, and yes, vacations. But when their new besties crash their swanky wedding and threaten to upend the already teetering balance of their family and relationship affairs, the almost newly-weds will have to navigate not only their newfound friendship but the expectations of everyone they know.

“A Wise Man Told Me Once to “Just Float”

John Cena is the highlight of this film as Ron, who is much more of a lovable doofus than the total beef head that you might expect; he continues to win me over with his natural magnetism and pure happiness to be there. Meredith Hagner as Kyla – his spitfire counterpart – is adorable: sugar-sweet and slightly unhinged. They play this odd charm and enthusiasm with total certainty, and it’s not a stretch to believe that these people are so likable despite all of their… idiosyncrasies.

Lil Rel Howery plays Marcus, and he’s easily capable of delivering the perfect goofy, reactionary response to Cena and Hagner’s antics, but only when he has the material to do so. Aside from a handful of funny quips, his lines often sound like the writers forgot to remove a placeholder response that they left in, lacking in subtext or distinct personality. Instead, he shines in the few moments of subtlety. Yvonne Orji suffers from this as well as Emily and is undoubtedly the least developed character overall, at no fault of her own; despite the lack of real material, she never does a bad job, and provides an efficient enough sounding-board for Marcus’ neurosis.

‘Vacation Friends’ – What Happens in Mexico Stays in Mexico

Years ago, when the film was still in early development, now ex-partners Chris Pratt and Anna Faris were set to star in the roles of Cena and Hagner’s eccentric duo. Other big names that floated around this long-delayed project were Nicolas Cage, Will Smith, and Ice Cube. I mention this because given the caliber of these stars, it makes me wonder whether this entire script slacks because it’s just the skeleton of a more profitable, and in turn, more carefully composed project.

From the very first scene, Howery and Orji’s characters are painfully one-dimensional, with Orji’s writing being notably weaker than any other member of the cast. Their scenes together are tedious, not because of their performances, but because of the pure monotony of their conversations. Each and every interaction consists of hamfisted exposition pertaining to their in-law/vacation friend problems or some randomly generated impersonal romantic exchanges. It’s a shame really, given that both of them are capable of nuanced performances if given the material.

Two common taglines for the film – ‘raw’ and ‘raunchy’ – feel like desperate wishes rather than earnest qualities. Yeah, there is enough crude humor and absurdity to earn it an R-rating, but I would hardly use such distinct words for this feature. The humor isn’t as committed and surreal as something like ‘Wet Hot American Summer’, but it’s not unflinchingly vulgar as something like ‘Superbad’. The twists and punchlines seem bland and subdued, if not by the strained comedic timing then just by the writing itself. The film definitely sags in the latter half, with most of the fun being condensed into the first quarter and the rest feeling clouded by uninteresting familial conflict. On the edges of the film, Carlos Santos makes a short-lived appearance at the beginning with some of the best comedic timing in the movie. Besides that, Robert Wisdom plays the most one-note father-in-law character that you could imagine, and former Vine star Andrew Bachelor (also known as King Bach) makes a brief and forgettable appearance in the role of Emily’s hot-headed brother-in-law.

The saving grace of this film is the scenes between Cena and Howery, which take precedence over any other theme. Their mismatched bromance is fun, and I’d be lying if I said there weren’t times where I cracked up at the silliness of certain scenes and the admittedly ‘unique’ way in which the director chose to shoot them. In these moments, the direct influence of a handful of dude writers in a room bouncing off of one another is palpable.

Final Thoughts: When An Idea is As Far As it Goes

The jokes that don’t land outweigh those that do, but that’s not to say that it’s without small victories. John Cena has a knack for this brand of silliness, and his chemistry with Howery is fun enough to watch. Hagner is convincingly quirky and cute as his down-for-anything partner in crime, and Orji carries herself with that comforting rationality that’s essential for a character in her position. However, the greatest weakness lies in the lack of care or attention to detail with the script, story, or personality. Aside from a few aforementioned ‘experimental’ moments, the film lacks atmosphere or creative, dynamic visuals. In terms of characterization, Cena gets the most loving treatment, and Howery definitely has his deadpan straight-man moments, but Hagner and especially Orji are squandered and delegated to the forgettable supporting roles as the film goes on. In my personal opinion, this cheapens the overall experience and detracts from the concept that this film promised in the first place.

So, I leave you with a question: If the visual composition is mediocre, the writing is paper-thin, and the actual storyline is skeletal at best, then what else is left?

Audiences can look forward to John Cena in the starring role of a new action film set to release in 2022 titled ‘Snafu’ alongside Jackie Chan. Lil Rel Howery has plenty of projects coming out in the next year, with a supporting role in a sports-drama film titled ‘National Champions’ being the soonest set to release in November 2021. Yvonne Orji has a supporting role in an upcoming animated TV series titled ‘My Dad the Bounty Hunter’.