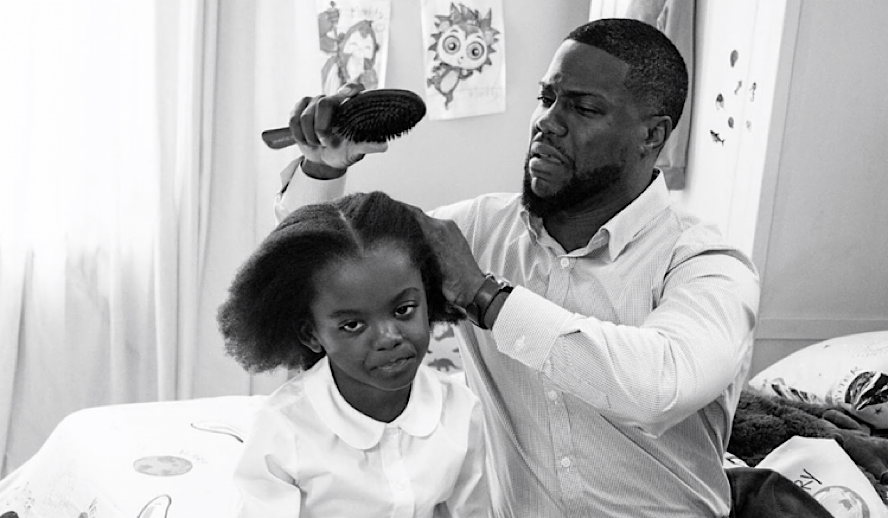 We love him for his Netflix stand-up routines, such as, ‘Let Me Explain’ and his endless resume of comedic films, however in Paul Weitz, ‘Fatherhood’, Kevin Hart takes on a different kind of role. Hart takes on the big screen with actor and fellow comedian, Lil Rey Howery in this heartwrenching and heartwarming drama. It is always nice to see genre actors change it up once in a while. It’s a great way to broaden their audience and rebrands themselves as entertainers.

A lot of actors have been doing this lately. Many serious actors have taken on comedic roles, while comedians are flexing their talents in the drama department. Initially, I was very confused to see Hart take on such a powerful role in this film. I wasn’t sure if he had the acting chops to pull it off, but I found myself pleasantly surprised. While he isn’t in the same acting range as fellow Philadelphians and comedic actors, Will Smith or Bradley Cooper, his performance was impressive nonetheless.

Kevin Hart is a father in real life to daughters Heaven Hart and Kaori Mai Hart. He also has two sons, Hendrix Hart, and Kenzo Kash Hart. We have a feeling the fatherly role may have come very naturally to him. It also helps that Kevin has experience with raising daughters. Not only does Kevin Hart star in this film, but he is also one of the four producers as well. Those of you who do not plan to go out to theaters are in luck! The theatrical release of the film was April 16th, however, Sony Pictures has plans to release this film on Netflix this summer.

The film is set to release on June 18th, which ironically is just a few days before Father’s Day. I absolutely plan to watch this film again with my own father, appreciating all of the sacrifices he made for me and praising him for his guidance and influence throughout my adolescence and adult life.

What Can Audiences Expect From ‘Fatherhood’?

This film gave me exactly what I was expecting. I knew going into this film, that it would tug on my heartstrings. I’ve always had a soft spot for single parents, doing their best to play both parental positions for their children. It’s less common to see single fathers taking on these positions. When I found out that this film was based on a true novel, ‘Two Kisses for Maddy: A Memoir For Loss And Love’ by Matthew Logelin. It makes the story much more meaningful to me.

I also love that this film follows a Black family. I appreciate this new, progressive wave of normalizing Black and Brown families, and displaying their warmth and nurturing nature. Cinema has invalidated the familial integrity of Black and Brown people for a very long time. I always wondered why families that looked like mine on television had absent fathers, abusive and neglectful households, and tragedy left and right. This shift in narrative has been long overdue. I’m very happy to see it.

Despite the premise of this film being set after a tragic incident, the film is more centralized on the way the family overcomes the tragedy with an abundance of love and strength. You will receive a great catharsis after watching this family turn a bad situation into something beautiful. ‘Fatherhood’ is the perfect ‘feel good’ film to watch with your father, or even with the whole family. This film follows the story of Matt (Hart), who loses his beloved wife during childbirth.

He is then thrown into fatherhood all by himself and goes through the motions of raising his daughter. It displays all the trials and errors of parenting while having wholesome and comedic moments. This film is similar to other films such as the 2013 film ‘Instructions Not Included’ and the 2006 award-winning film, ‘The Pursuit of Happiness’. If you are someone who enjoys these kinds of films, you will definitely enjoy ‘Fatherhood’, as it fits the same narrative of a single father, making it work.

Why This Representation of Single Fathers Matters Today

This is actually not the first Sony Pictures film to tackle the premise of a single father, playing both roles. In 2019, Sony released the Oscar-winning, animated short film, ‘Hair Love’. This short follows a young father, Stephen, trying to maintain and style his daughter’s abundance of curls. The daughter finds styling tutorials for her father to watch. After numerous failed attempts, he finally gets it right. It is later realized the mother is in the hospital, recovering from chemotherapy. She has lost all of her hair. The audience also discovers that it was the mother who created those tutorials for her daughter.

Haircare and protective styling are really important in the Black community. It is typically a practice that mothers do for their children. So having a father take on a stereotypically feminine role like this, is such a culture shock to many audiences. There is even a scene in ‘Fatherhood’ where Matt (Hart) attempts to do his daughter’s hair. There are definitely parallels between these two films.

In both Cinema and in society, we have force-fed audiences the stereotypical narrative of Black fatherlessness in America. It has become the defining image of Black families, and that just isn’t fair nor is it always accurate. I believe celebrating the diversity of all family dynamics is extremely important, but they are specifically important in the underrepresented communities, such as Black and Brown households. Specifically, Black men are commercialized as an ultra brute and ultra insensitive.

They are completely dehumanized in many forms of media. Producing a film that depicts a Black man as nurturing, and loving is really important to display to a wide audience. It is also a more accurate depiction of fatherhood in general. My hope is that Cinema keeps progressing in this direction. I have seen a lot of great changes in the way certain people are portrayed in film and television, and I think that will be really helpful in creating more tolerant and progressive generations.