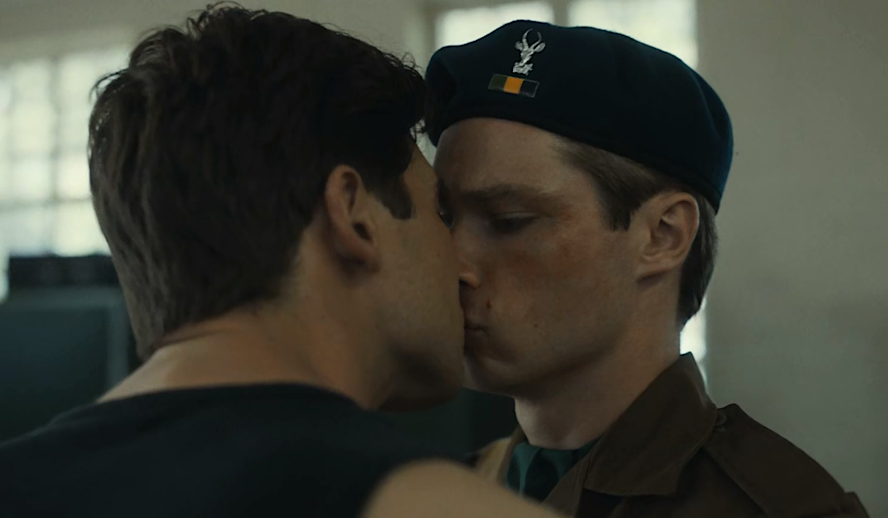 Directed by Oliver Hermanus and based on André Carl van der Merwe’s 2006 autobiographical novel of the same name, ‘Moffie’ follows Nicholas van der Swart (Kai Luke Brummer), a gay, English-speaking teenager in South Africa, 1981, at the height of Apartheid and the war in Angola.

The White minority of the time, which composed only 18% of South Africa’s population (today, 8%), held complete political control over the Black majority–in a brief sermon partway through the film, a fiery Afrikaner priest likens the struggle of the Whites and the Blacks to that of David and Goliath. From 1957-1993, all White males older than 16 were conscripted into the South African Defence Force (SADF) for two compulsory years of service–’Moffie’ begins with Van der Swart coming of age.

Initially following the intense and degrading process of basic training, ‘Moffie’ begs comparison to boot camp war films like ‘Full Metal Jacket’ and ‘Jarhead’, even treading some familiar territory–upon arrival, for instance, Sergeant Brand (Hilton Pelser) declares that they are now “property of the South African Government” and that “it’s our job to turn you scabs into men.” There’s one notably weak recruit who’s made an example of (here lovingly nicknamed “pimply cunt”), and some of the boys even throw a blanket party (just like the one they threw for Private “Pyle”).

Afterward, the two guests of honor, bloodied and bruised, are stood in front of the assembled rank-and-file and publicly shamed for their indecency, having been caught kissing in a bathroom stall–

Under Apartheid, homosexuality was a crime punishable by up to seven years in prison–here, they’re sent to the ominous “Ward 22” to receive “treatment”–in reality, there was nothing ambiguous about the horrific medical torture that LGBT individuals endured at the hands of the SADF, with practices like chemical castration and electric shock being used as “therapies” to cure individuals of their homosexuality.

Worst of all, however, was the forced sexual reassignments of up to 900 individuals, with most victims being gay, drafted men between the ages of 16-24–many victims died on the table, while others were left with incomplete procedures. Despite the fact that survivors would need extensive hormonal therapy, there were no follow-up appointments of any kind–many would commit suicide.

Before anything else, it should be noted that ‘Moffie’ is beautifully constructed. Braam du Toit shines with an eclectic score that ranges from horror-like pizzicato strings (à la ‘There Will Be Blood’ and ‘The Shining’) to ‘Summer Breeze’ by Seals & Crofts, the latter of which plays in a flashback where young Van der Swart is caught peeping on another boy at the public pool–here, the combined virtuosities of director Hermanus, DP Jamie D Ramsay, and editors Alain Dessauvage and George Hanmer are put on full display as the scene plays out in an inconspicuously masterful long take.

The “long take,” of course, has long been registered into the filmmaker’s cache of cinematic tricks–here, it’s effectively used to quickly establish the setting, heighten the tension, and reaffirm our protagonist’s perspective by cinematically translating a “fleeting memory.” Period-perfect mise-en-scène and detailed background direction complete the illusion, offering a raw, enticing naturalism that alternately underscores moments of brutality and tenderness.

Long take aside, Ramsay fills out the fullscreen frame of every shot with rich, dynamic compositions, while Dessauvage and Hanmer keep the film moving at an economic pace–clocking in at 104 minutes, what I perhaps appreciate most about ‘Moffie’ is that it accomplishes what it sets out to do with no bloat or gimmicks. This is a tightly constructed film.

There are very few Black faces in ‘Moffie’ because this is, rather than a discussion of Apartheid itself, a microcosmic exploration of the members of an ill-conceived privileged class, soon to be upended.

In addition to the legislated segregation and homophobia, anti-Communist propaganda is fed to the recruits, whose adversaries are succinctly laid out by Lieutenant Engel (Martin Munro)–

“Communism, laziness, faggotry, nigger sympathy, and any kind of undermining will not be tolerated. If you want to behave like the enemy, then I will treat you like the enemy.”

Even in films like ‘Full Metal Jacket’, there’s the underlying assumption that the drill sergeant is personally removed, only following tough, but proven guidelines for psychologically reconditioning fresh civilians into effective, selfless soldiers–here, the SADF instructors seem petty, cruel, and ineffective.

What sets ‘Moffie’ apart as a boot camp movie is the gut-wrenching ugliness of the institution, and the ultimate combat itself is the least important part of the whole thing.

‘Moffie’ is playing in limited theaters and available to buy or rent on VOD–CLICK HERE to watch.