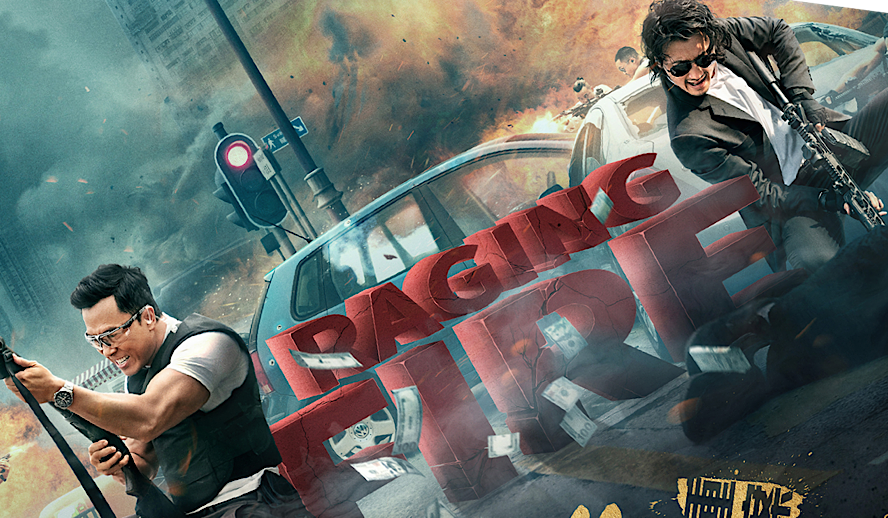 ‘Raging Fire’ Director, Benny Chan, passed away of nasopharyngeal cancer on August 23rd, 2020. Chan had reportedly fallen ill during the final weeks of production for ‘Raging Fire’ but kept the information to himself and finished filming, passing away before post-production could begin. He died peacefully in his home city of Hong Kong at the age of 58, he is survived by a wife, Lisa Jiang Lisha, his four kids, and the final film he would ever produce ‘Raging Fire.’

As for ‘Raging Fire,’ I could not picture a more extravagant farewell to audiences. The film is marvelously violent with jaw-dropping action scenes and elite-level hand-to-hand combat that even the most decorated of UFC veterans would find impressive. ‘Raging Fire’ is one of the most impressive displays of on-screen combat since Gareth Evans ‘The Raid: Redemption’ and is loaded from beginning to end with supremely choreographed battles.

Although the film is far from perfect, it is a joyous exercise in performative, flamboyant violence paired with some comically bad screenwriting resulting in one of the most fun I have had in a theater this year. Donnie Yen is fantastic as an unflappably loyal, by-the-books cop on a mission for justice after his former protege murders almost a dozen of his police officers contemporaries. The film plays it straight. It’s a buddy cop procedural film and that’s about it, narratively. The one wrinkle the film provides, its unbelievable violence, is enough to turn this film into a raging good time from what could’ve been an utter slog of a watch.

A bit trite, overused, and simple, ‘Raging Fire’ is the story of revenge. There are two sides to this revenge, however, as two cops (Donnie Yen and Nicholas Tse) are subjected to harsh treatment from their higher-ups resulting in one of them (Tse) killing a civilian and being sentenced to 4 years in jail. When Bong (Yen) testifies against his former protege, Ngo (Tse) decides to exact his vengeance on him one day, no matter the cost. This vendetta leads Ngo, now freed from jail, to infiltrate a drug deal where he and his team of former cops convicted alongside him murder dozens in absolutely brutal fashion. This act of violence strikes Bong to his core and he vows to find and arrest everyone involved in the incident.

That’s the plot. Pretty straightforward, pretty run of the mill. You’ve seen this film at least once before, Michael Mann’s ‘Heat’ starring Al Pacino is a near-perfect replica and, other than its absurd violence, there is nothing new or inventive about ‘Raging Fire.’ But somehow it works. As noted previously, the script is noticeably bad, focusing on melodramatics whenever possible and resorting to some distractingly poorly executed exposition. But for some reason, the terrible dialogue and flair for the dramatic makes the film a bit more fun and even provides some needed levity to what could be a 125-minute wall-to-wall thrill ride. For some reason, I found myself utterly enjoying every moment of ‘Raging Fire,’ giggling to myself at the carnage and flamboyance of one of the most fun experiences I’ve had in theaters since their reopening.

Leading man Donnie Yen is fantastic. ‘Raging Fire’ is very much a vehicle for Yen to be the star and bask in most of the limelight that comes with being involved with a multi-million dollar blockbuster like this. However, the film never feels shallow. You roll your eyes several times and chuckle under your breath, sure, but it never feels like its entire Earthly purpose is for Donnie Yen to gain some professional traction. Performatively, Yen is great. He plays the unflappable cop role perfectly and has the perfect appearance for the role. He is not overly attractive, honestly, he is an every-man type character. Through the first half of the film, he is a relatable, and unimpressive character. Then the second half rolls around and Yen unleashes his physique, absolutely shredded and toned to the level of stage-ready bodybuilders.  All in all, I left theaters remembering the name Donnie Yen and looking forward to whatever project he has coming up in the pipeline.

I was similarly impressed with co-star Nicholas Tse for his performance in ‘Raging Fire.’ Tse is a bit different from Yen in the sense that he looks more the type to star in an action film, he is handsome, thin yet strong, with untamable long hair and a scarred face. He comes across as unhinged and deranged, but is still able to be charismatic and likable at the same time. In scenes where we flash backward in time, he is clean-cut, handsome, and similarly likable, but to a different degree and extent than his later self.

As for his performance, Tse is fantastic. He plays the part to perfection capturing the energy of a pissed-off former cop betrayed by his family seeking revenge. And one thing that he and Donnie Yen both achieve, with their action and physical sequences, is magnificent. The two are both extremely physically capable and do many of their own stunts and, boy, are they good.

The Stunt Doubles and Choreographers

There is only one stunt performer credited with working on ‘Raging Fire’ and that is Kenji Sato. Sato is most well known for working on 2013’s ‘The Wolverine’ as a stunt double and performer. He absolutely must be credited and acknowledged for his work in ‘Raging Fire’ because he truly does some absurd things.

Unsurprisingly, along with being the star and lead producer, Donnie Yen is also co-action director alongside Chris Collins and Heun Chiu Ku. The three are credited with designing and managing the large composite action sequences that traverse set pieces and explode entire cities. Kenji Tanigaki is credited with designing the hand-to-hand fight sequences, his best scene is undoubtedly the final battle between Ngo and Bong where they have an incredible, bloody fistfight. Finally, the choreographer for these action and fight scenes is Kang Yu who ultimately had the vision for how to make these fights look aesthetically pleasing, a fantastic art form in and of itself. These names must be credited for their incredible work on ‘Raging Fire,’ in my opinion.

‘Raging Fire’ is a wild, fun, and extravagant time and, certainly, many will not be fans of it due to its absurd violence. However, if you are a fan of that sort of action-variety, in any fashion, you will surely enjoy this film. It is currently only in theaters for its North American release, so I strongly recommend you go see this while you still can!