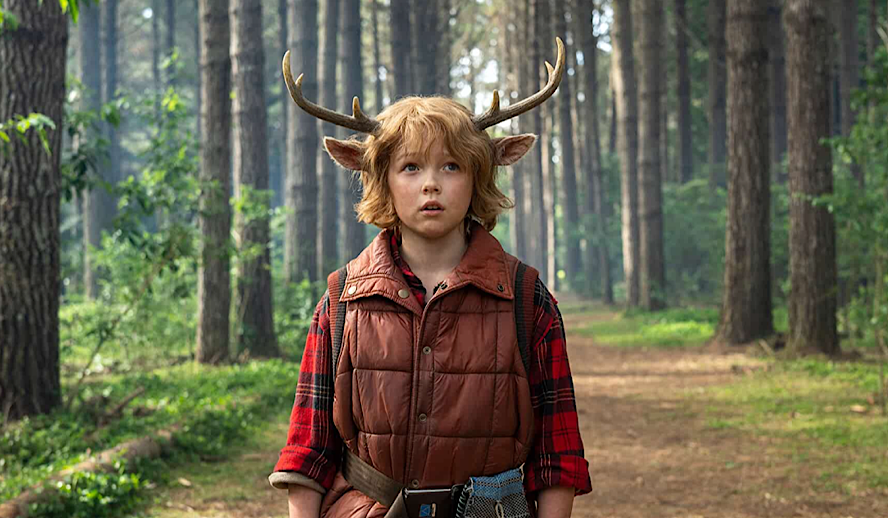 “This is a story about a very special boy, a boy by the name of Gus.”

‘Sweet Tooth’ is a fantasy drama series streaming on Netflix, starring Christian Convery, Nonso Anozie, Adeel Akhtar, and Will Forte, among others. Based on the popular DC comic series of the same name, this story takes place in a post-apocalyptic world where a global virus called “The Great Crumble”  has wiped out most of humanity. Meanwhile, at the same time as the outbreak, mysterious babies have begun appearing, born as half-animal, half-human hybrids.

Gus, played by Convery, is a boy who is both half-human and half-deer, and he has lived in seclusion all his life. When a turn of events forces him to leave his home, he sets out on an adventure of discovery and survival, aided by a mysterious man named Tommy Jepperd (played by Anozie).

When I first heard about this show, the first thing that piqued my interest was that Robert Downey Jr. and Susan Downey were executive producers on this project. Ever since Downey Jr.’s departure from the Marvel Cinematic Universe, I’ve been intrigued to see what kind of projects he and his wife might involve themselves in. The casting of Will Forte pushed my interest even further. I had always been a big fan of his due to his work as a cast member on ‘Saturday Night Live’ and on the sitcom ‘The Last Man on Earth’, where he played mostly comedic roles. Being cast in a show like this with a completely different tone than those comedies, I was curious to see how he’d do.

What really sold me about this project, however, was the premise. Post-apocalyptic stories are something I usually like exploring, especially stories that highlight humanity’s failures. So, a story about a boy who’s part-deer having to survive in a world trying to kill him? Count me in.

The Story and Characters of ‘Sweet Tooth’

If there’s one thing that ‘Sweet Tooth’ has an endless supply of, it’s imagination. With its colorful setting and sense of adventure, this show feels like a storybook come to life. With lots of thick forests and woodsy-looking cabins and houses, the sense of adventure feels more real than ever. All this with the added benefit of the show being narrated by James Brolin and his soothing voice, ‘Sweet Tooth’ comes off like an old folk story. As Gus explores the world around him, it feels like we are experiencing everything about this new world just as he is. It’s a fish-out-of-water story, except out of the water, everything wants to hunt him down.

Gus himself is a treat to watch. Christian Convery does a good job of playing a kid with a great sense of amazement and wonder. Despite his father’s efforts to contain him and keep him protected inside their fenced-off home, Gus can’t help but question everything. He’s just a ten-year-old kid and wants to do things kids his age normally like doing, like exploring his surroundings. That’s where his childish personality causes trouble.

Will Forte plays Gus’ father, affectionately called “Pubba”. His role in the series is lesser than I was expecting, but effective nonetheless. As Gus’ dad, his goal is to keep his son safe and protect him from the outside world. Forte has starred in dramatic roles before, playing the main role in the 2013 comedy-drama film ‘Nebraska’. He does great work as Pubba, portraying a father that cares dearly about his child and will do whatever it takes to ensure his protection.

The other performances are stand-out as well. Nonso Anozie does great work with his subdued performance as Jepperd. Jepperd clearly has a shadowy past with a lot to hide, and Anozie’s gruff portrayal certainly keeps him as intriguing as he is. Adeel Akhtar and Dania Ramirez portray Dr. Aditya Singh and Aimee, two people who have both been affected by The Great Crumble in different ways. They add intrigue to the show and give us a glimpse of what life in this post-apocalyptic America is like from different parts of the country.

The story of ‘Sweet Tooth’ is split between three different plotlines. The main story follows Gus and Jebbard as they make their way from towards Colorado, in search of Gus’ mother. Another plot focuses on Dr. Singh, living in a guarded safe zone, as he tries to find a cure for the virus while hiding a dangerous secret about his wife. The C-story of the three deals with Aimee as she finds herself feeling liberated with the freedom that the apocalypse has given her until she finds a half-human, half-pig hybrid left in her care.

These three stories are all interesting and lead to developments that kept me hooked during the episodes. I liked seeing how different places were affected by the world ending, such as with Dr. Singh and Aimee. Dr. Singh lives in a world that feels completely isolated from the outbreak of the virus. His suburban neighborhood has neighbors walking, clean streets, and sleek houses that look unaffected from the chaos going on in the world. Yet, by episode three, we see that there’s something darker going on behind the scenes of this friendly place.

The real heart of the story lies with Gus and Jepperd, however. Seeing Gus try to navigate the outside world is both fun to see and also suspenseful, as he tries his best to avoid being hunted down by both government officials and anyone else looking to kill any hybrids they come across. The two characters have a great dynamic together, with Gus questioning this new environment and Jebbard focused on keeping him alive. Their adventure together is the main factor of what makes this show worth seeing.

Pandemic Parallels and My Final Thoughts

Now, watching ‘Sweet Tooth’, there are some pretty notable parallels between The Great Crumble and the COVID-19 pandemic that has been going on the entirety of the past year. These are obviously coincidental, as the show got greenlit before the pandemic, but it still makes the anguish and fear that these characters hold towards the virus feel that much more real and palpable. When characters cover their mouths and put on masks when around others it feels all too familiar to the past year we just faced. Maybe the series developer Jim Mickle took inspiration after COVID forced a pause in production, but nonetheless, it feels all too real in today’s time.

Overall, ‘Sweet Tooth’ is definitely a show you should consider watching. I know to some people it might feel like just another run-of-the-mill show about people surviving the apocalypse, but this series feels different with its use of the half-animal hybrids. A lot of care has obviously gone into making this show and that is clear through the great acting, writing, and production seen here. Robert Downey Jr., Susan Downey, Jim Mickle, and everyone else involved with the project put a lot of effort into making ‘Sweet Tooth’ a show worth watching, and it definitely pays off here. If you want to see a fun fantasy show filled with adventure, consider checking this one out.

All eight episodes of ‘Sweet Tooth’ are now streaming on Netflix.