Is this the Return of High Fantasy? ‘Shadow and Bone’, ‘The Nevers’, ‘Game of Thrones’ Prequel & More 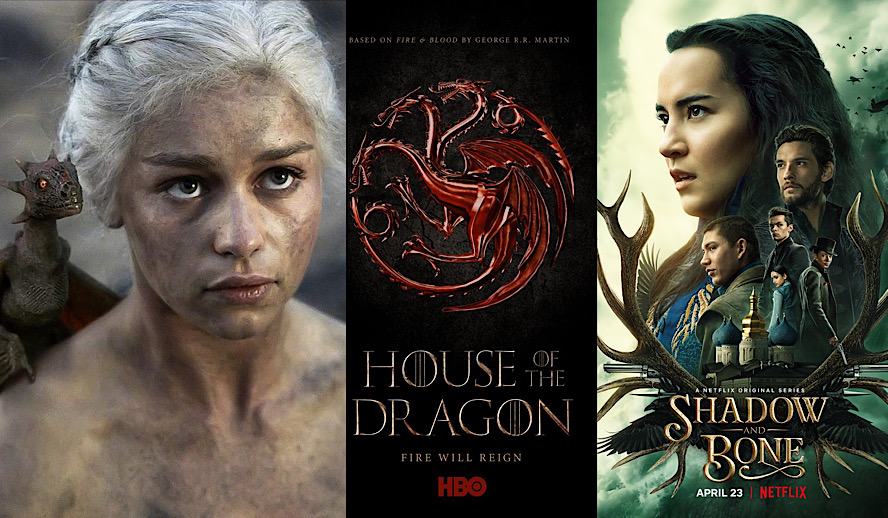 As sure as the seasons come and go, genres go in and out of style. Remember the YA, dystopia phase of the 2010s, where films like ‘The Hunger Games’ and ‘The Maze Runner’ reigned king? Or what about just a few years ago, when Netflix almost single-handedly revived romantic comedies? Well, the next biggest thing is certainly one to be excited for, as it’s a genre not seen in its full glory since ‘Lord of the Rings.’ That’s right – projections based on recently released projects and upcoming projects in development all point to High Fantasy.

Netflix is commonly known as the mammoth streamer, specializing in a massive output of content with a global appeal. As such, their influence on what’s popular is quite enormous – they simply have to keep pushing the same type of content, again and again. Or, they just have to have a hit. In 2019, they released ‘The Witcher,’ a high fantasy series based on the popular books of the same name. The series follows “Geralt of Rivia (Henry Cavill), a solitary monster hunter, [who] struggles to find his place in a world where people often prove more wicked than beasts.”

‘The Witcher’ has all the makings of high fantasy – complex, fantastical worldbuilding that evidences itself in complicated characters, politics, and more. In a bid to become the next ‘Game of Thrones,’ the show attempted an ambitious, non-linear format following several characters in different time periods, before converging in the same time period.

‘The Witcher’ was popular for fans of the series, but didn’t necessarily make the enormous splash Netflix had hoped for. Fast forward to 2021 and they release season one of ‘Shadow and Bone’ – another high fantasy series based on the admired YA novels by Leigh Bardugo. The series follows the young Alina Starkov as she learns of her prophetic destiny to banish the “Fold,” a treacherous stretch of land engulfed in darkness and danger. And in ‘Shadow and Bone,’ Netflix has found a hit. With pretty great ratings across the board, the series has also gained something important in launching the next great trend – a vast demographic.

While ‘The Witcher’ had a more limited audience, mostly based on its maturity, ‘Shadow and Bone’ profits from being in the YA genre – which pulls in adult readers, even if geared towards a teenage audience. In fact, according to an article from The Atlantic called ‘Why So Many Adults Love Young-Adult Literature,’ approximately 55% of YA readers are adults. To say it simply – YA has a wide, wide appeal. Combine that with the already popular book series, cast fantasy fan-favorites such as actor Ben Barnes, who recognized from his performance as Prince Caspian in the Narnia film series, and you’ve got the next internet sensation.

‘Shadow and Bone’ is projected to have a second season, while ‘The Witcher’ looks forward to a season two release later this year. Coupled together, both show a strong renewed interest in High Fantasy as Netflix pours more and more money into these high-budget IPs.

Projects in Development: ‘Harry Potter,’ ‘Lord of the Rings,’ and ‘Game of Thrones’ Spin-Off

But Netflix isn’t the only one on the High Fantasy ride. For one, Amazon Prime is trying to score its first big-scale hit after finding success with smaller shows such as ‘Fleabag,’ ‘The Boys,’ or ‘The Marvelous Mrs. Maisel.’ Back in 2017, they announced they were officially working on a ‘Lord of the Rings’ adaptation for streaming, to the delight of fans worldwide. According to Indiewire, “the show is expected to explore new storylines that occur before the events of the “The Fellowship of the Ring” film.” The show is an incredibly ambitious endeavor, meant to live up to the previous films, which of course are regarded as some of the best films of all time. In fact, ‘Lord of the Rings’ is the most awarded film series in all of history.

HBO Max – the harbinger of high production value tv shows – also has a few High Fantasy projects in early development. Namely is the ‘Harry Potter’ spinoff series that was announced just in January. Not much information has been released on the show, leaving fans to wonder if it will be set in America like the ‘Fantastic Beasts’ series, in the past like the upcoming ‘Hogwarts Legacy’ game, or even based on the Mauraders story already introduced in the novels. The latter would be particularly exciting as fans on Tik Tok have already “fan cast” the Marauder roles and have been asking for a spinoff for years. Whatever it will be, ‘Harry Potter’ is one of the biggest franchises in the world and will certainly draw audiences of all ages and backgrounds.

HBO also has a ‘Game of Thrones’ spinoff in development based on George R.R. Martin’s 2018 novel ‘Fire & Blood.’ The series will be focused on House Targaryen and feature prominent talents such as Olivia Cooke, Emma D’Arcy, and Matt Smith. It seems like while everyone is trying to be the next ‘Game of Thrones,’ HBO is intending to beat the rush, take the crown back, and continue their legacy. The show is projected to premiere in 2022, but there is still not much known about the series. If you want to know what information has been released so far, check out this Hollywood Insider article!

Finally, HBO Max also has a ‘Dune’ spinoff in the works called ‘Dune: The Sisterhood.’ While this is not necessarily High Fantasy, but Sci-Fi instead, the introduction of this series still shows a renewed interest in fantastical worlds.

The Lure of High Fantasy in the Bleak COVID-19 Era

With all these projects underway or in development, it looks like the return of High Fantasy is nigh. And actually, it all makes sense when you look at the bleak COVID-19 era we are living in. While the pandemic appeared over a year ago, it’s still ravaging many countries and populations at risk. The political climate is also highly strung in countries around the world, namely America where the 2020 election only just wrapped up months ago. Audiences are surely looking for a way to escape this reality and be whisked off to worlds far away – and with social distancing and quarantine – sometimes the only way to do that is through the screen.