‘Midnight in the Switchgrass’: Megan Fox, Lukas Haas, and Way Less Bruce Willis Than You Would Expect 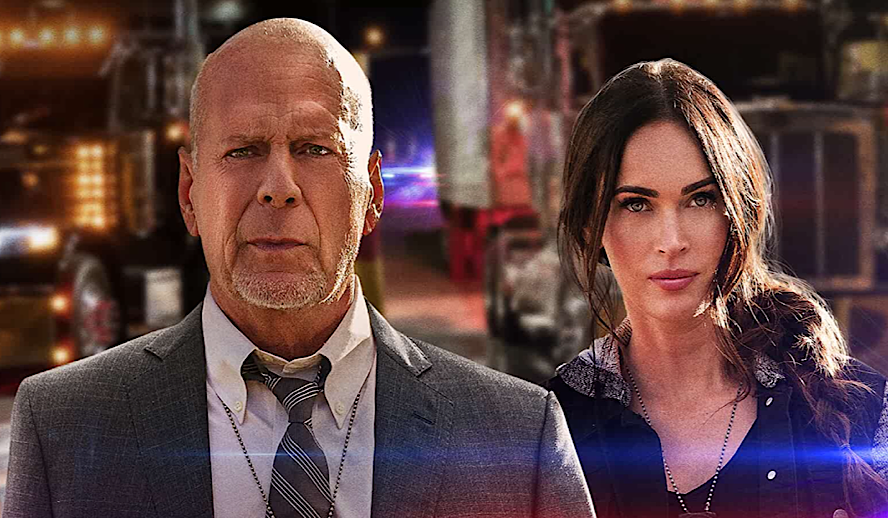 Photo: ‘Midnight in the Switchgrass’/Lionsgate

Megan Fox and Bruce Willis play FBI agents who encounter a film adaptation of the infamous Truck Stop Killer in this brutal crime thriller. Though impressive actors such as Emile Hirsch and Lukas Haas buff out the true story of this film, ‘Midnight in the Switchgrass’ is an exercise in tropedom with a murder investigation and cat-and-mouse game that is oh-so obligatory for major thrillers like these.

First Impressions: “Lions are born knowing they are predators, antelopes understand that they are prey, humans are the only creatures on Earth given a choice”

Randall Emmett is not your average creator, with only published experience as a producer rather than a director; as a producer, he can take responsibility for critically-acclaimed films such as ‘The Irishman’, ‘Silence’, and ‘A Vigilante’. Following this success, Emmett has finally embarked on his own directorial pursuit in the form of ‘Midnight in the Switchgrass’ – a crime thriller inspired by the true story of the Truck Stop Killer. With stars such as Megan Fox, Bruce Willis, and Machine Gun Kelly being tightly associated with this film, audiences should expect a lot more Emile Hirsch and Lukas Haas in their viewing experience.

The story has a lot of familiar elements that you would expect from a dark, thrilling crime drama: a sting-operating federal agent duo, a deeply invested local cop, a savage murderer with a preference for young women. They tap into something that audiences recognize, that makes sense and prepares us for this kind of movie, and that makes this tale an easy one to begin. The cast of characters is relatively familiar, the setting could take place in almost any big-small city in America, and the true story of the murderous Robert Rhoades is enough to allure any true crime fan. Despite all of this, ‘MITS’ is a film that leaves a lot to be desired.

The Cons: When A Film Could Be So Much More

Many of the scenes are quick and thin, only making efforts to string together a skeleton of a plot and neglecting to add any real meat to the emotional beats. The lack of characterization and generic dialogue makes this film feel forgettable even as you watch it, with each member of the cast only on the screen and speaking, acting, relaying information long enough to lead audiences to a diffident climax.

Do not expect to see a lot of Bruce Willis, though every single poster might lead you to do so. For those of us that might be drawn to this film because of him (i.e. many people in the general moviegoer population), this warning is for you. The fact that he’s the center of every single piece of visual marketing is more off-putting than if he was just regarded as another minor character, which he is. Basically only appearing in scenes with Megan Fox, he feels like a ghost lingering around the edges of the film; no reference to ‘The Sixth Sense’ intended.

Thankfully, there is a healthy dose of Megan Fox, but the composition of the story and dialogue gives her little room to show her true acting chops. While she’s no object, she comes off more like the faint caricature of a  ‘badass’ female character. Badass meaning, in this case, that she swears a lot. Coming off of the critical praise of her performance in ‘Till Death’ this year already, I wish that she had been given more opportunity to showcase her talent in a starring role like this.

‘Midnight in the Switchgrass’ – The Pros: “It’s Purification Time”

With that being said, it’s fun to watch Megan Fox in action, and it’s easy to buy the whole tough-as-nails secret agent act on her. Though their scenes are brief, you can catch a glimpse of the first kindlings of one of the more publicized romances of recent years between Fox and MGK. Their chemistry gives these scenes a little more zest than others.

Emile Hirsch and Lukas Haas are the best pieces of this crime drama as a more authentic expression of the film’s cop vs. killer dynamic. Hirsch is endearing as a small-town Pensacola cop with a friendly but determined disposition; he makes the best of what sense of character he’s given. Haas is the real star, making efforts to create tension as the Truck Stop Killer, performing his evil with an ominous smile and an unassuming sense of duplicity. We see him balance that strange parallel between his family and the terrible darkness within him. His portrayal of the killer is unsettling and engaging, and I found myself looking forward to his scenes.

I think that Emmett has a vision for the brutal; some atmospheric scenes involving the killer and his victims’ struggle provided a break of much-needed rawness for the thriller, and I found myself wishing that he had utilized the R-rating to a fuller extent. Despite the film lacking in other visual, artistic elements, there was some substance to the brief criminal moments in this thriller.

A Forgettable Conclusion and Advice for the Future

The problem with ‘Midnight in the Switchgrass’ is that it feels like a producer’s first endeavor into Cinema: generic, bland, and packed with scenes that merely move the plot forward. While there’s some brief chemistry and slight thrills tucked between the folds of the film, it’s mostly a layered cake of moments that must happen for a story to advance at all. Emmett has so many tools at his expense, yet chooses to, essentially, reinvent the wheel. However, it has the essence of being so much more, and with more thoughtful visuals or well-developed characters, this film could have amplified the performances and crafted that sense of tension that the film so needed.

Emmett’s next directorial project, ‘Wash Me in the River’ is currently in post-production and is set to be released in 2022, starring Robert de Niro and John Malkovich. Fox is starring in ‘Big Gold Brick’ alongside Oscar Isaac which is projected to premiere in 2022 as well. Willis has an array of films releasing within the next year, the most recent being ‘Bandits’ which has already completed post-production. Audiences can also look forward to Emile Hirsch starring in ‘American Night’ releasing October 22, 2021, while Lukas Haas’ new film – ‘Halo of Stars’ – is in post-production with a yet-to-be-determined release date.