Alfonso Cuaron and Chaitanya Tamhane’s ‘The Disciple’: The Beauty and Burden of Indian Classical Music 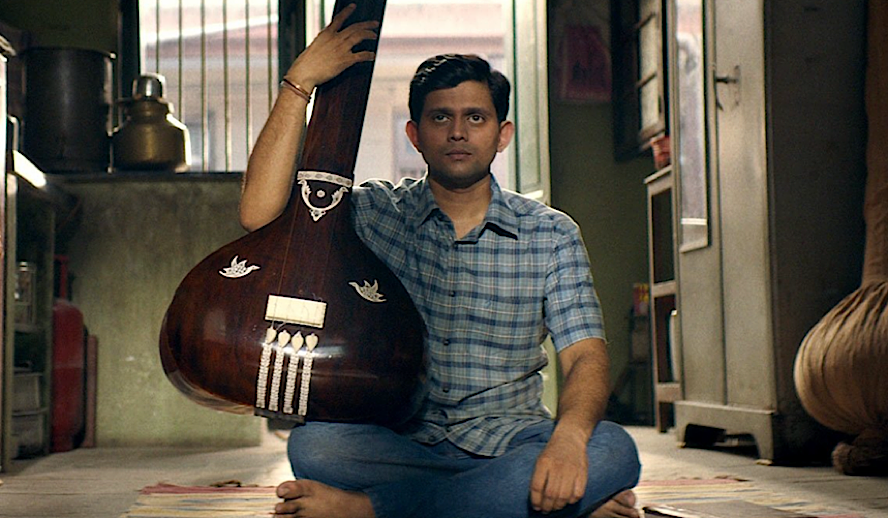 From the first moments, Chaitanya Tamhane’s deeply felt film ‘The Disciple’ lets us know its protagonist, a devoted aspiring Northern Indian Classical singer, is someone who spends a lot of his time blending in. A concert is going on, a serene setting in some kind of community center. The singer is an elderly man, a guru, with superhuman vocal chords, whose traditional Hindustani vocalizations (I only later found out classical performances are largely improvised) immediately establish the film as deeply authentic and spiritual.

We get a closer look at the stage, see the interesting various Indian musical instruments, and only when the camera closes in on one of his accompanists, do we meet our hero, one of two tanpura players, Sharad Nerulkar. He is watching the guru with wide eyes before closing them in a moment of tranquility. He is the guru’s biggest fan, and the disciple that gives the film its title.

The film is an exploration of what it means to have a dream in a nearly impossible to break into “industry.” I use that word with caution, Hindustani classical music is not an industry, and should not be treated as such, which as the film explores, makes it even harder to be a part of. It is more of a spiritual trade: at once deeply subjective and also held to very objective traditional standards.

The film was made in collaboration with Alfonso Cuarón, who serves as executive producer. Cuarón guided Tamhane throughout the writing, and it isn’t hard to see his influence in the editing: the long takes, static camera, and capturing of settings even as characters leave them. Sharad is played by Aditya Modak, a real-life classical singer who gives one of those rare authentic yet nuanced performances as a first-time actor. When trying to find information on him, it is likely you’ll be directed to a page where you can “book the artist”, not unlike the websites seen in the film.

‘The Disciple’ – A Nobody Wanting to Be a Somebody

After the opening, the film is filled with other moments that tell us rather objectively that Sharad is one of many, a theme that goes well with the densely populated setting of Mumbai. This is achieved through the framing of the shots. After a competition, he sits with all the contestants to await the judges’ decision on bleachers. He is not in the center, the camera doesn’t try to make him stand out, but we watch him get gradually, but never overtly, nervous as third, second, and first are called and his name is not heard. Later, he is at a mediation hall, and it’s only when the camera pans that we know he is even there. Sharad rides his motorcycle in slo-mo through the city’s nighttime landscape as he listens to the lectures of the revered Maestra Sindhubai Jadhav (known as Maai by her admirers).

The ultimate voice of wisdom, Maai trained his guru and was worshipped by Sharad’s father. It’s a definite hero moment which ends when the camera pans out and he becomes another motorcycle on the highway. Sharad, like all artists, is constantly struggling to answer the question “am I special?” He is taking the leap of faith and assuming yes, but who really knows? Each time his guru gives him constructive criticism, we feel his doubt, when his solo is cut short because he “is not listening, and his fellow student takes over, we feel his despair, and when he almost replies to someone who leaves a negative comment on one of his YouTube videos, we are waiting on edge, unsure like him if he should even bother.

This is the film’s most universal theme: anyone who calls themselves an artist is constantly at war with the world around them which never asked him or her to become one. By extension, the artist is constantly at war with themselves: are they worthy of this dichotomy? This struggle is ever-present throughout the film such as when his grandmother interrupts his practice and asks if he’s busy: he believes he is, but she does not. His mother wants him to get married and have a family, a future he considers for most of the film as a failure.

A Unique Kind of Fame

What makes this particular exploration of the “starving artist” struggle so fascinating is that the Hindustani musical tradition thrives on and is based in an anti-fame, almost monk-like lifestyle dedicated to deep spiritual exploration. As Maai whispers in his ear one night while he rides his motorcycle, those who want to sing classical music should get used to being lonely and hungry. Tamhane sets up a perfect contrast to this. Throughout the film, Sharad intently watches the rise of a young pop star on India’s version of American Idol, no doubt being tempted with thoughts that her fate is not so bad. We watch him lose faith as takes care of his guru, who is all alone living in a one-room apartment in his old age, unable to even stay awake or even get cab fare for the concerts he is asked to perform at. Sharad attempts to donate the tapes of Maai’s recording and a librarian has no idea who she is, needing him to spell out her name.

Through flashbacks, we learn that Sharad’s father wanted to be a singer at one point, but instead ended up being a devoted music scholar, and conditioned his son to chase the dream instead. One of the most chilling moments is when Maai’s recordings start to talk to him directly, emphasizing his father’s failure and saying that writing about and surrounding yourself with artists does not make you talented. That may be true, but as the film progresses we see Sharad come to terms with the fact that that doesn’t make you worthless. He meets a skeptical music writer who busts several myths about the great singers he admires, Sharad listens closely but becomes angry, like a kid who learns there is no such thing as Santa Claus.

As the film progresses, it becomes clear that the deity-like status that Sharad has given these gurus and that he is trying so hard to attain might not be for him. However, it is intentionally unclear whether that is a personal choice or a fact he must overcome. Tamhane’s film is not a prescriptive one, if classical music is an eternal quest, then who can really say with certainty whether Sharad is a failure or a success in the end?

‘The Disciple’ premiered and competed at the 2020 Venice Film Festival. Theatrical release complications arose due to the Pandemic however Netflix acquired the distribution rights and it is now available to stream.